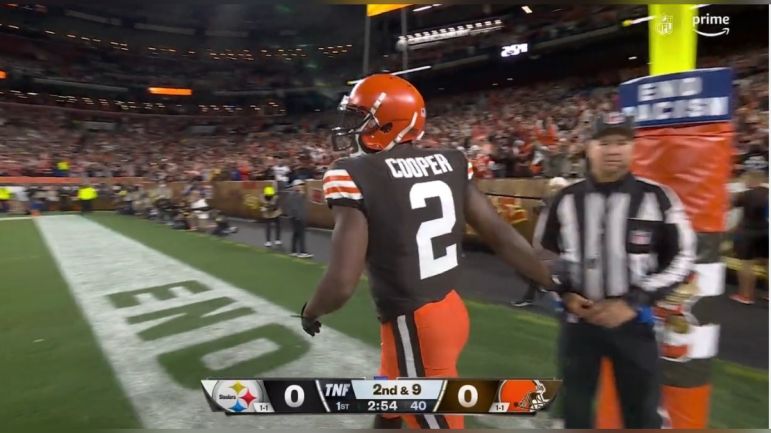 While much of the attention on Thursday night was pointed toward the Pittsburgh Steelers and their run defense, it was their secondary that had a rough outing, especially in the second half. While speaking to the media following the action, Alex Highsmith commented on Cleveland Browns’ star wideout Amari Cooper, who broke through the century mark with 101 receiving yards.

WR Amari Cooper led the Browns in receiving with seven receptions for 101 yards (14.4 average) and a touchdown. #Steelers #NFL

Acquired via an offseason trade with the Dallas Cowboys, Cooper is still one of the top receivers in the NFL, and his big play ability was on full display against the Steelers. Highsmith echoed that sentiment in regard to that aspect of his game as well as how the Browns utilize it.

“He’s a dynamic guy, and that’s what they do with him is play action games,” Highsmith told reporters after the game. “He’s one of the guys that runs down the field and creates those plays. Like I said, we’ll just assess the film and see how it went.”

Arguably, one of the plays that spelled the end for the Steelers came when Browns quarterback Jacoby Brissett hit Cooper downfield for a 32-yard completion. After that, Kareem Hunt and Nick Chubb did the rest, running it seven times and punching it in for the score at the top of the fourth quarter. Cooper caught seven passes, but his average of 14.4 yards per catch showed how far he could go. That highlight-reel catch for 32 yards helped seal the win for the Browns, in part because the Steelers’ offense slowed down in the second half and couldn’t respond.

Other than Cooper and Browns tight end David Njoku, who had 89 yards receiving with his own big catch for 19 yards, the Steelers’ pass defense was able to keep all the opposing receivers at bay. In fact, the third leading receiver for the Browns was Chubb, who had three catches for 14 yards. Regrettably, giving up the big plays derailed the Steelers. As Highsmith mentioned in his final words, the defense is going to have to hit the film and address this issue. It’ll be interesting to see if Highsmith and the rest of the defense can figure out how to keep Cooper from killing them deep in their final regular season game on January 8th.