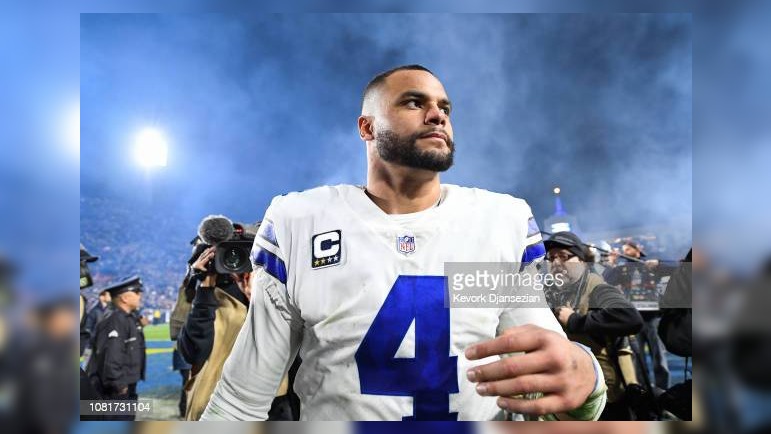 Tragedy struck the Dallas Cowboys Sunday night in their home matchup against the Tampa Bay Buccaneers when QB Dak Prescott appeared to injure his hand on a pass attempt that EDGE Shaq Barrett attempted to defend. Prescott took himself out of the game after having Barrett’s hands collide with his thumb and was shorty taken to the locker room for further evaluation.

#Cowboys QB Dak Prescott likely suffered a Bennett fracture and will likely be out for 6-8 weeks.@sportsdocmatt provides insight on Dak's hand injury, and when we will see him back on the field. pic.twitter.com/vK8ueZemCI

Reports surfaced shortly after the game that Prescott has suffered a fracture in his thumb and would likely miss 6-8 weeks depending on the severity of the fracture and how long he would take to recover after having surgery.

Dak Prescott is expected to have surgery Monday on a right thumb injury and miss 6-8 weeks, according to multiple sources. He will meet with the team’s hand specialist on Monday, but sources said he will have a pin and plate inserted to stabilize the joint.

The Cowboys lost 19-3 in a sleeper of a game where neither offense took over in comparison to the shootout between both teams to open the 2021 season a year ago. Dallas particularly struggled on offense, completing 50% of its passes for 173 yards and an INT while picking up only 71 yards on the ground on 18 rush attempts (3.9 YPC).

Cooper Rush came in after Prescott left the game and went 7/13 for 64 yards. Rush played in place of Prescott several times last season including a start against the Minnesota Vikings that Prescott missed due to injury. Last season, Rush completed 30-of-47 pass attempts for 422 yards and three TDs with one INT, posting a passer rating of 105.1 and a QBR of 47.8.

Rush started his career as a UDFA in Dallas back in 2017, going on and off the roster in the seasons to follow, including a brief stint in New York with the Giants in 2020, before coming back to Dallas. Team owner Jerry Jones expressed after the game that they intend to go forward with Cooper Rush as their starting QB until Prescott returns.

Jerry Jones later added that Cooper Rush is the new starting QB. Dallas has now lost Tyron Smith and Dak Prescott to injury in a matter of weeks. https://t.co/6HWQ8mRezM

From a Steelers’ perspective, the question is whether Dallas would be interested in trying to upgrade from Rush and acquire another capable starting QB like Pittsburgh’s very own Mason Rudolph or San Francisco QB Jimmy Garoppolo. From a draft pick compensation standpoint, the Cowboys have all their selections available in the 2023 NFL Draft, making a deal for a mid- to late-round pick plausible. They also have a little over $11 million in cap space per OverTheCap which would be enough to take on Rudolph’s salary.

Acquiring Garoppolo would be a tad more complex for Dallas given a higher contract guarantee as well as incentives in his contract restructure completed with San Francisco prior to the start of the season. He also has a no-trade clause that he would have to waive to get dealt there, which would most likely be the case as he regains a starting job amid the 49ers rolling with Trey Lance as their starting QB.

While Rudolph to Dallas would make sense given the need at the position and the assets Dallas has available to trade via draft capital and potential roster upgrades, the probability of a trade taking place is likely pretty slim. Dallas most likely sees Rush in a similar light to Rudolph as Rush led the Cowboys to victory against the Vikings last season 20-16. Rush went 24/40 in that game for 325 yards and two TDs to one INT. CeeDee Lamb and Amari Cooper both topped 100 yards, and the third WR Cedric Wilson also had himself a game with 84 yards on three catches.

Given that Rush has started in place of Dak before and the fact that Pittsburgh hasn’t actively been shopping Rudolph since naming him the third-string QB, it’s more likely that Dallas will roll with what it has in what could be a lost season with Prescott and Tyron Smith out for extended time rather than parting with draft capital for what they may deem a minor upgrade at the spot starter QB spot going from Rush to Rudolph.