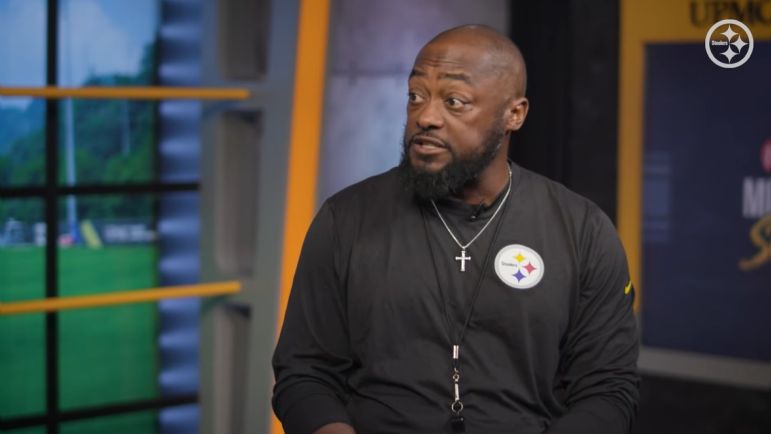 Splash plays. That’s the name of the game. The best offenses, and by extension, the best teams, are the ones who can turn the tide of a game in a moment’s notice. Take what the Buffalo Bills did Monday night. A tight, 7-7 game against the Tennessee Titans through one quarter of play. A 10-7 Bills’ lead with just over a minute to play. Fast forward one quarter of play, 15 game minutes later, and a 10-7 lead turned into a 41-7 beatdown by the Bills, hitting touchdown after touchdown.

While no one will mistake the Steelers’ offense for what Buffalo is capable of, those teams designed the blueprint. Hit the big play. That’s what Pittsburgh needs to do more of and Mike Tomlin knows it, admitting as much in the most recent episode of The Mike Tomlin Show.

“It’s just the splash,” Tomlin told host Bob Pompeani. “We’re working to develop cohesion and the type of splash good units make…last week, we didn’t make enough splash plays. Not only on offense but on defense and special teams. When you play one-possession games like we’ve been in, you need those splash plays, particularly in the weighty moments.”

Since 2020, the Steelers are a league-best 16-5-1 in one-possession games, no stranger to heart-stopping finishes. Much of that was attributed to Ben Roethlisberger in clutch fourth-quarter moments, going 15-4-1 from 2020 to 2021. This year, the Steelers are 1-1 in such games, and the odds of them having a sterling record in close games this year aren’t terribly high.

Referencing the Steelers’ lack of splash plays, Tomlin explained why the deep ball didn’t work against the Patriots and why his definition of “splash” can mean different things.

“We knew that plays down the field would be challenging because they play with a lid on it. They got a guy back there named McCourty whose 35 years old whose the active interception leader in the game. He’s made a career of making 90 degree angle breaks and picking balls off downfield…going in against New England, we knew a splash play was a 15 to 20 yard strike because of McCourty and the style of play they have.”

That, of course, is referring to Devin McCourty, a long-time Patriots’ safety and still one of the better ones in the game. As Tomlin later alluded to, McCourty and the Pats’ secondary did a good job taking away Pittsburgh’s crosser/Yankee concept, muddying up the middle of the field and forcing checkdowns.

To date, the Steelers have just five completions of 20+ yards, ranking in the bottom-third of the league. It’s a similar story with their run game, four carries of 10+ yards, a similar ranking league-wide. Pittsburgh doesn’t have a well-oiled machine capable of putting together impressive, 15-play drives. Sure, they went 16 plays last week, but totaled just 46 yards, the first such drive in the league since 2016.

As Tomlin quipped last year, chunk plays mask a lot of game planning. Hitting a 40+ yard play can change the tenor of a drive and a game. That was the cast in Week 2 when the Patriots hit a 44-yard touchdown to WR Nelson Agholor, one of the turning points in New England’s win. This year, the Cleveland Browns have been on both ends of splash plays. No team has more rushes of 10+ yards than their 15, while they’re tied for the league lead with three 40+ yard completions against them, allowing the Carolina Panthers and New York Jets to come back late in games. Pittsburgh will need to take advantage of that latter fact while limiting the former if they want to come out of Thursday night’s game with a win.