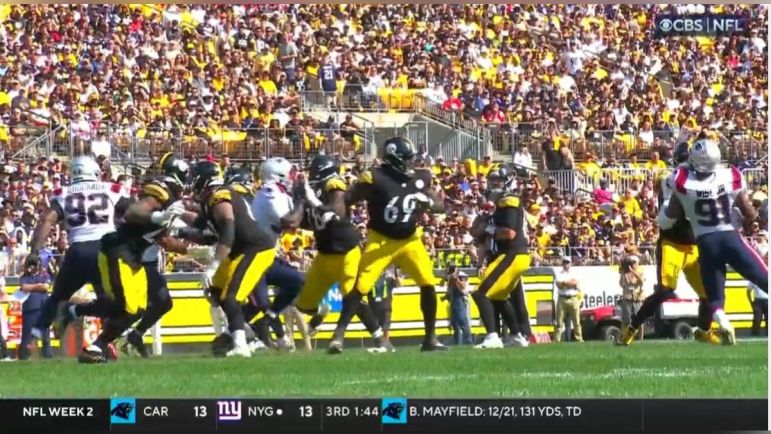 On Monday, HC Mike Tomlin spoke to the media in his weekly press conference where he talked about the events of last Sunday’s loss at home to the New England Patriots and previewed the team’s upcoming Week 3 matchup against the Cleveland Browns on Thursday night.

When Tomlin was asked about the possibility of mixing in more tempo into the offense to keep the defense on their heels and due to the success, that the team has had with it in the preseason and at times this season, Tomlin suggested that going up-tempo is something that Pittsburgh has always factored into their offensive game plan for an opponent.

“We had tempo scheduled and we use it some in-game,” Tomlin said during Monday’s press conference which aired live on the team’s YouTube channel. “I’m not going to get into when we choose to use it and when we don’t. We had some tempo component in our plan and we used it some in both weeks and we’ll continue to do that. I think everybody in today’s game week in and week out identifies tempo or pace as a component of their plan and make thoughtful decisions on how to utilize it. I know we do.”

Pittsburgh has had some of its best success on the offensive side of the ball when they choose to run the hurry up offense, feeling the pressure to move the ball down the field and score. They used tempo on the team’s final drive last week against the Bengals, completing key passes to Pat Freiermuth down the field as Pittsburgh got in field goal range to kick the game winner in overtime. They used no-huddle against the Patriots this Sunday, driving 75 yards in nine plays wile only using 2:49 of clock, methodically moving the ball down the field and capping off the drive with a TD pass to Freiermuth.

Trubisky to Freiermuth for SIX.

Pittsburgh utilized tempo in the preseason as well and had their best offensive drives when they chose to go no-huddle, as evidenced by Kenny Pickett’s drives before the half at Jacksonville and at the end of the game at home against Seattle. Mitch Trubisky also had success in the no-huddle against Detroit in the preseason finale, driving down the field in less than two minutes to score right before the intermission. Pittsburgh excelled at going up-tempo in previous seasons with Ben Roethlisberger who executed the no-huddle offense better at times than the steady, methodical offense.

Steelers' offense only moved the ball last season when they went no-huddle. Roethlisberger says the no-huddle plays are a fraction of what they were under Matt Canada.

So now nothing is working offensively. https://t.co/OODbktU6bA

Based on Ben’s comments, OC Matt Canada has toned down the use of the no-huddle offense when he took the job with Ben occasionally calling his own number in certain situations, calling the offense on the field in attempt to use tempo to move the ball quickly down the field to score. Now that Ben has retired, Canada likely has more control in whether the offense goes with tempo or not, choosing to call his own plays rather than go with the hurry up offense unless the situation directly calls for it.

Still, given the team’s lack of success staying ahead of the chains using the traditional offense and given the success they have had in recent seasons with the no-huddle, Tomlin, Canada, and the rest of the coaching staff would be wise to consider implementing more tempo in the coming weeks to spark a currently stagnant offense.