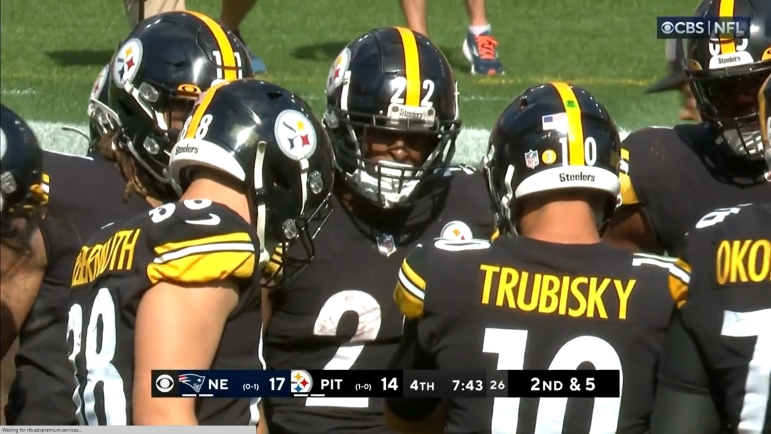 Coming off of a rather difficult 2021 season that saw the Pittsburgh Steelers struggle to consistently run the football in the first year under offensive coordinator Matt Canada, much of the attention and focus in the offseason was paid to fixing the problem in the ground game.

In came a new offensive line coach in Pat Meyer, along with two higher profile free agent signings in the trenches in center Mason Cole and right guard James Daniels. So too did quarterback Mitch Trubisky, who was expected to bring a mobility element to the table as a quarterback who had some rushing prowess to his game.

Through two games though, the run game has been a major disappointment for the black and gold with second-year pro Najee Harris. Granted, Harris has missed some lanes early in the season, but overall the Steelers just aren’t getting much of a push up front, and the scheme isn’t creating many sound runs overall, drawing some criticism early in the year.

Man, Najee Harris just isn't seeing the field well early in the season. Know he's not healthy, but he's got to correct this issue. Missing some major lanes. #Steelers pic.twitter.com/HereTlJlv9

“Through two games the Steelers are averaging 3.8 yards per carry — exactly where they left off in 2021,” Pryor writes for ESPN.com. “While the revamped offensive line is playing decently in pass protection, it isn’t always in sync with the run game. Slowed by a foot injury, Najee Harris is averaging just 2.9 yards per carry with 72 yards through two games. For the Steelers to get the run game going, the offense needs to open up the passing game, and Harris and the offensive line need to get on the same page.”

It’s not so much about getting on the same page in the run game as it is seeing the holes, getting hats on defenders and, most importantly, getting Harris as healthy as possible with the lingering foot injury that he has.

Awful read by Najee Harris. No other way around it. Predetermined he was going to bounce it. Look at that lane inside… https://t.co/ViGPNwaBkK

The 2.9 yards per carry for Harris on the season is a major concern. That said, he looked a lot better in Week 2 against the New England Patriots, rushing for 49 yards on 15 carries. There were some signs of life in the Week 2 performance from Harris and offensive line, but it’s still not good enough to provide sorely needed balance offensively.

Nobody is asking or expecting the Steelers’ offense to go from one of the league’s worst rushing attacks to a top 10 unit overnight. Steady improvement would be nice though, especially as the offensive line continues to gel. That, and the offensive coordinator allowing the line to get into a rhythm in the run game would be nice, too.