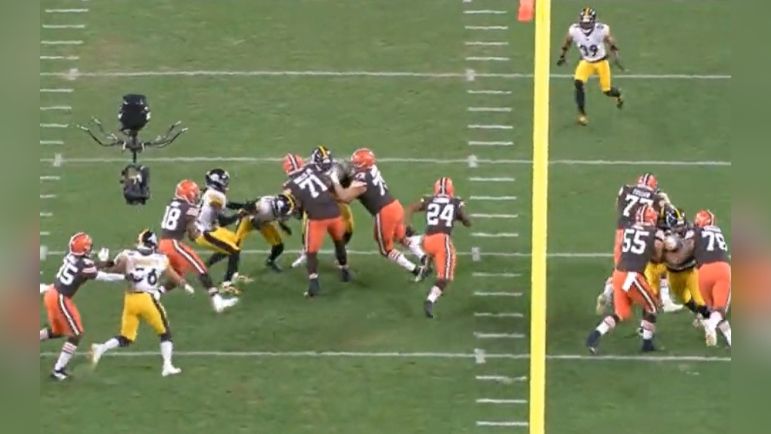 Thursday night was as good a litmus test as any in seeing just how much progress the Pittsburgh Steelers run defense had made from their abysmal 2021 season to 2022, a group where they’re healthier and more experienced. But they failed with flying colors against the Browns, allowing 171 yards on the ground and truck-sized holes for Nick Chubb to run through, at least, when he wasn’t breaking tackles. Cleveland was the more physical team throughout the game and wore Pittsburgh down in the second half with long drives controlled on the ground. Speaking to reporters after the game, Terrell Edmunds admitted what was obvious.

The Browns played their brand of football Thursday night, staying on schedule with a solid and effective run game. They didn’t need the home run play, only Nick Chubb’s 36-yard run went longer than 16 yards on the night, but they were highly efficient on first down, keeping them on schedule throughout the game.

In fact, the Browns averaged six yards per play on first down last night, an excellent number with Jacoby Brissett rarely making mistakes, going 7/9 for 70 yards and a touchdown. On the ground, Nick Chubb averaged close to six yards per carry, and as a team, they averaged 5.2 yards per first down run. A wholly unacceptable number for the Steelers’ defense. Losing T.J. Watt hurt this team not just against the pass but against the run. He’s one of the league’s better EDGE players against the run with fantastic backside pursuit and someone who can’t be blocked by tight ends.

Here’s just one of the many massive lanes Chubb could run through last night.

Throughout the entire offseason, the Steelers preached the desire to get back to their run-stopping ways. They’re still talking. But their actions speak louder than their words.

“We’ve been singing the same song so we gotta find out exactly what we gotta do to get better,” Edmunds said.

The Browns came into the game with the NFL’s #1 rushing offense, and they’re highly likely to exit Week 3 still atop the leaderboard. Cleveland’s run game is among the best in football and will be among Pittsburgh’s toughest challenges all year long. But the Steelers’ run defense has wilted after a good-enough showing against the Cincinnati Bengals, allowing the Patriots and Browns to grind them down in the second halves of games. Pittsburgh’s consistent offensive three-and-outs are doing the defense no favors, but the defense is struggling to get off blocks, finish tackles, and get early-down run stops, allowing teams to stay in rhythm and go on long, tiring drives.

In Week 4, the New York Jets’ run game won’t be nearly as potent as the Browns. But they have a two-headed attack in rookie Breece Hall and Michael Carter and are averaging 4.8 yards per carry heading into their third game. And if the Steelers can’t solve their own issues, they’ll be in trouble all season.