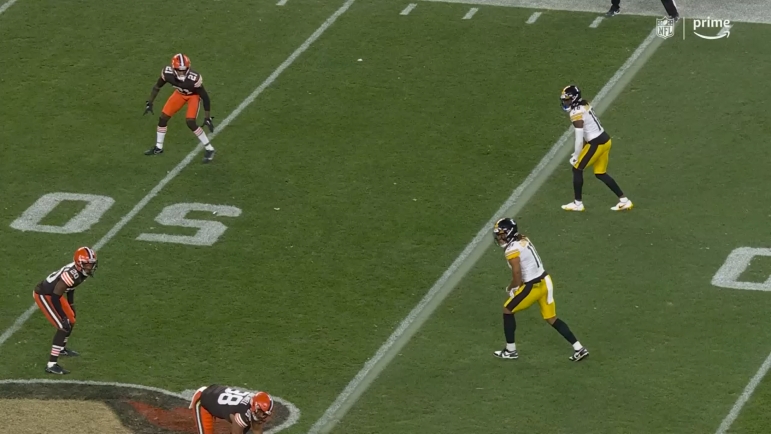 Heading into week four, the Pittsburgh Steelers rank 28th in the league in passing yards as an offense with just 548 yards. They also rank 29th in net yards per pass attempt, showing that it’s not just about quantity of opportunity. There is no team in the league with fewer passing touchdowns. Not a single wide receiver has caught one yet, their two having gone to running back Najee Harris and tight end Pat Freiermuth, respectively.

“The receivers are legit”, New York Jets head coach Robert Saleh, of the Steelers’ upcoming opponent, said of Pittsburgh’s corps of wide receivers this week, according to Pittsburgh’s website. “They’re big, they’re strong, they’re fast”. They also haven’t done much this season, whether that’s on them or on the offense as a whole.

Diontae Johnson is the team’s leading wide receiver, and receiver generally, with team highs of 21 receptions on 33 targets for 196 receiving yards. But he’s averaging under 10 yards per reception and just half a yard after the catch per reception. Yards after the catch has been a staple of his repertoire up to this point in his career.

The only other wide receiver who has been targeted more than once is rookie second-round pick George Pickens, who has five receptions for 65 yards, nearly all of it coming on just two spectacular grabs. He has been targeted 12 times, with more than half of those targets coming against the Browns.

Claypool and Pickens are indeed big, as Saleh said. Some of them could be said to be strong, even if they don’t always play like it. Fast is relative, but none of them at least are slow. But so far, they haven’t established themselves as legit.

Of course, some of them have a reputation. Johnson was a Pro Bowler last year after catching 107 passes for 1,161 yards and eight touchdowns. He has already made some excellent plays this season, even if he’s left some on the table as well.

Claypool isn’t being targeted in bulk, necessarily, averaging six targets per game thus far, but he hasn’t been given a lot to work with, as some of his biggest opportunities have been off-target. As for Pickens, his route tree his highly limited right now, mostly with go balls, and Trubisky’s accuracy on them has been hit or miss.

All three of these guys are unquestionably ‘legit’ when it comes to raw talent, but what matters is results, and as a group, they’re not producing. Even if there are numerous extraneous factors preventing them from having a larger impact than they easily could or should have, that’s just the truth as told through the first three games of the 2022 season thus far.