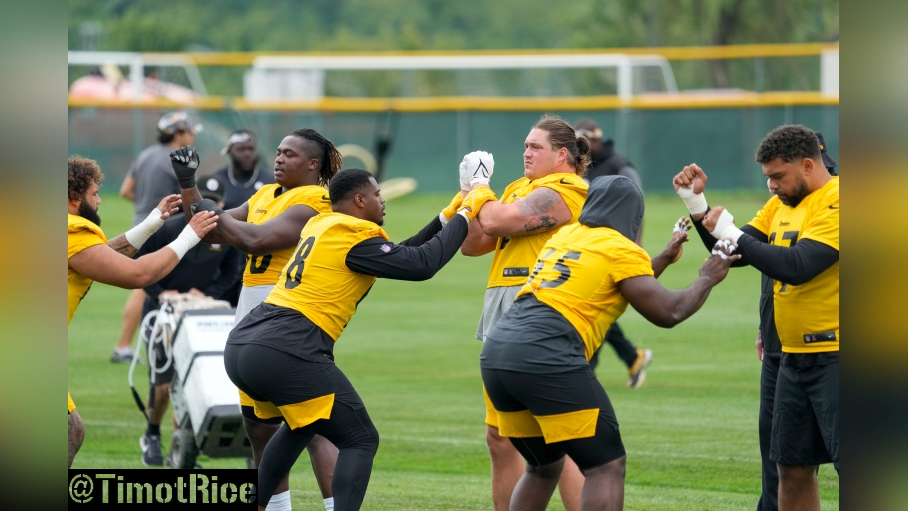 Ogunjobi, who came over from the Cincinnati Bengals this offseason, garnered praise for his power and ability to move the pocket.

“As you watch Larry as he’s coming off that foot, he’s a big, powerful man, he moves the pocket, he’s active, he does a lot of good things, and he gives you some veteran presence inside. He’s really good in that regard. I think that’s what he gives us, he gives us another stout body inside,” Austin said, per official transcript provided by the team.

Ogunjobi had a lisfranc injury this offseason, which was the reason why he became available to Pittsburgh. He had originally agreed to a three-year contract with the Chicago Bears, but he failed a physical due to the foot injury. In the wake of Stephon Tuitt’s retirement, Pittsburgh brought him in on a one-year deal and he’s expected to see a solid amount of playing time with the Steelers.

His reputation is primarily that of a pass-rushing interior lineman, and his seven sacks last year to go along with 21.5 through four seasons in the league would support that. While he does have a lot of pass-rushing ability, his work in the run game is underrated. As Alex Kozora pointed out, it’s been a strength of his throughout the preseason. With Pittsburgh’s run defense limping to a 32nd overall finish last season, Ogunjobi’s addition, along with Tyson Alualu returning from his broken ankle, should give Pittsburgh’s run defense a major boost.

As for Leal, Pittsburgh’s third-round pick in the 2022 NFL Draft, Austin praised his development from the beginning of the summer to now.

“He’s gotten better. He is what we thought he is. He’s a big, strong kid with a lot of room to get better, to grow. He’s probably further ahead in the pass rush ability right now than he is in the run game. So, he’ll keep coming along, [Karl] Dunbar will keep coaching him and that kid will keep getting better because he’s a good worker. He’s a good kid. So, we like where he’s going
right now. Is he a finished product? No, but none of us are,” Austin said via official transcript provided by the team.

Given the depth that Pittsburgh has on the defensive line, Leal will likely be a gameday inactive to start his career. He had first round buzz prior to his final college season, but questions about his fit led to him being considered a Day 2 prospect, and Pittsburgh was able to scoop him up in the third round. His pass-rushing ability is certainly an asset, and will be moreso as he continues to develop.

He doesn’t have great burst, and while he’s raw right now, being in Pittsburgh’s system working alongside Cam Heyward, Alualu and Ogunjobi and under Karl Dunbar should hopefully accelerate his development a bit. While he might not see a ton of playing time his rookie year, Leal is definitely somebody to watch and a guy who I think could be an important part of Pittsburgh’s defense down the road.

With Week 1 kicking off on Sunday for Pittsburgh, it’ll be fun to watch if the defensive line can meet the high expectations they have coming into the season.