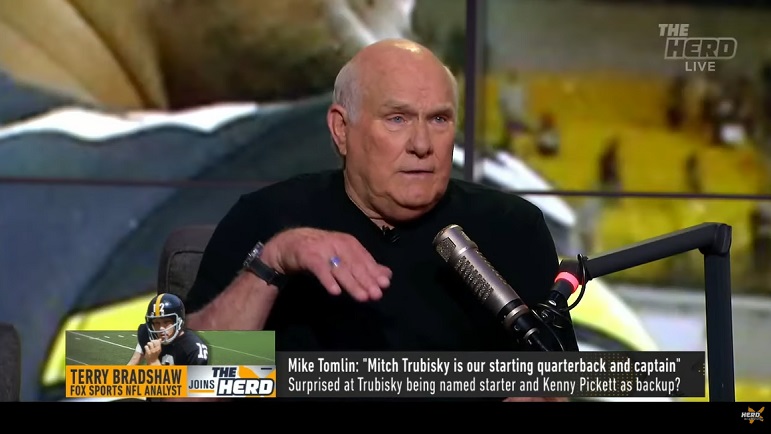 Terry Bradshaw went on The Herd with Colin Cowherd earlier today, and he said that he believes Kenny Pickett should be the Pittsburgh Steelers’ starting quarterback.

“I would have started Pickett. Because I’ve already seen the other guys. I know they can play well one week or two weeks and then we’re gonna see the other side. I would’ve started the kid, and I wouldn’t have had to make any excuses for it. He’s exciting, the players love him, the fans love him, and he’s 24 years old, started 54 games in college. He’s so ready to play that I would’ve started him,” Bradshaw said via a clip posted to YouTube.

While Bradshaw admitted that Trubisky didn’t do anything to lose the job in the preseason, he also said that he believes that he’s the starter just because they committed to him when they signed him as a free agent.

Pickett looked ready to go in the preseason, there’s no denying that. He looked like a guy that could be a capable day one starter, but ultimately, Pittsburgh chose to go with Trubisky, who ran with the ones throughout training camp and the preseason. You can question whether or not it was a fair and even quarterback competition, because nobody else was given a shot at QB1, but the Steelers clearly believe Trubisky is the quarterback who gives them the best chance to win.

Pickett does have a lot of starting experience in college, but college and the NFL aren’t the same. The game moves at a much quicker pace in the NFL, and while Pickett looked impressive facing pressure in the preseason, there’s no guarantee that would transfer to the regular season when teams are playing their starters for four quarters. His time to throw time in college was slow, and it wouldn’t fly in the NFL, especially with the state of Pittsburgh’s offensive line. At this point, I take much more stock in his preseason performance, but given that Trubisky has operated an NFL offense before and faced an NFL pass rush could be a factor for Pittsburgh giving him the nod to start 2022.

I don’t think it’ll be all that long of a wait until Pickett sees the field. I think he’ll play for this time at some point in 2022, and I have zero doubts that he’ll be the full-time starter in 2023. It comes down to whomever Pittsburgh thinks gives them the best chance to win. Right now, they believe Trubisky is that guy. Maybe by Week 4, they think it’s Pickett. Whoever the starter is, he’s going to need the offensive line to step up and not play as poorly as it did in the preseason for Pittsburgh to have any chance to compete in 2022.

With Pittsburgh’s season kicking off on Sunday, we’ll see if Trubisky can show why he won the starting job when the Steelers take on the Bengals at 1 p.m. at Paycor Stadium.