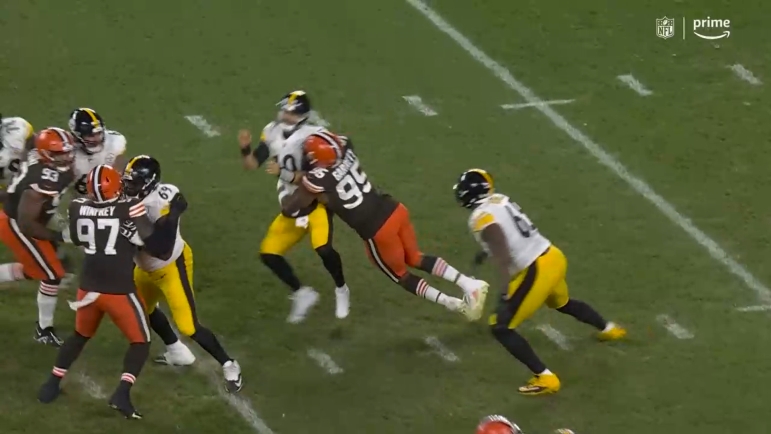 The Cleveland Browns suffered a scare this week after star defensive end Myles Garrett was involved in a one-car crash. His vehicle flipped over several times, and he was transported to a nearby hospital, though was able to be discharged later the same day.

He was reported to have suffered a shoulder sprain and biceps strain in the accident along with minor bumps and bruises, but Browns head coach Kevin Stefanski told reporters yesterday that he does expect Garrett to be in the building today, and that he is not as of now ruling anybody out for their next game.

Stefanski only offered on Garrett’s absence from the facility yesterday that he was “resting” but also said that he was “grateful that he is okay”; still, whether or not he is okay enough to play in the team’s next game is yet to be determined. He was asked if Garrett would practice today, to which he responded that they will see.

The fact that the possibility of him participating in practice is even a discussion is, of course, good news. I would hope that whatever fanbase-related or reputation-related issues that Steelers fans might have with Garrett as a player or person would not so cloud the window of their moral compass that they might take some joy in his misfortune; some comments have suggested otherwise.

Garrett has not missed a game due to injury since his rookie season back in 2017. He missed the final six games of the 2019 season due to suspension over the incident you are very well aware of—and the biggest reason so many Steelers fans hate him—and in the following year, he missed two games while on the Reserve/COVID-19 list. He played all 17 games last season and posted a career-high 16 sacks, which was the third-most in the NFL. He has posted double-digit sacks four years in a row, including 10 in the 10 games in which he played in 2019, totaling 61.5 career sacks in 71 games played.

He is a part of the Browns’ nucleus, and he’s also paid like it, so any game that he misses is a big problem, much as T.J. Watt’s absence is crushing for the Pittsburgh Steelers. Cleveland is also uncertain to get its other edge rusher, Jadeveon Clowney, back from the injury that kept him out of the Steelers game a week ago.

The Browns take on the Atlanta Falcons on Sunday, who are 1-2 this season with Marcus Mariota at quarterback, the victory coming this past Sunday over the Seattle Seahawks. They lost their first two games to the New Orleans Saints and the Los Angeles Rams.

Cleveland is one spectacular collapse away from being 3-0 to start the season. They held a 13-point lead against the New York Jets in Week 2 with under two minutes to play and somehow managed to squander it, becoming the first team in years with such a lead to do so in such a short amount of time.

Unfortunately, they had no problems closing out the Steelers.