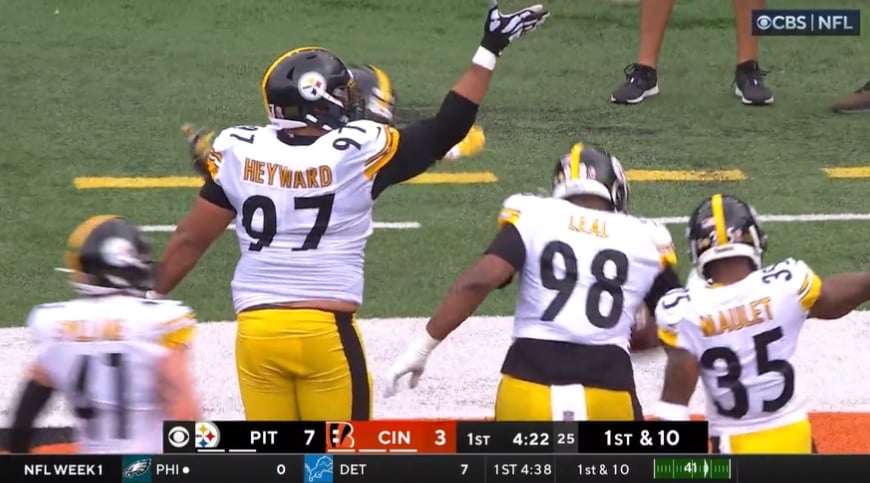 Winners and losers from the Pittsburgh Steelers 23-20 OT win against the Cincinnati Bengals in the Week One opener. What a ridiculous game.

Minkah Fitzpatrick: This game was certainly highlighted by the Steelers’ defensive stars. Fitzpatrick got the party started two plays into the year with a pick-six of Joe Burrow, undercutting a deep curl to house it. Fitzpatrick’s downfield tackle against Joe Mixon on his 4th down, 31-yard run before the half saved the Steelers four points, holding the Bengals to a field goal. His blocked extra point of course was incredible.

Some thought Fitzpatrick had a down 2021 thanks to just two interceptions. But he made tons of plays that didn’t show up on the box score and today, he made plays that did. Pittsburgh got big plays from every level of its defense.

Alex Highsmith: Highsmith said this offseason his goal this season was to record at least ten sacks. He got 20% of the way there one half into play and picked up a third in the second half. Highsmith was great on the edge against LT Jonah Williams and finished strongly, an area he struggled a year ago, forcing a fumble that Cam Heyward recovered. Highsmith and T.J. Watt could be a top duo.

Cam Heyward: Heyward gave Bengals’ rookie LG Cordell Volson his “welcome to the NFL” moment with a sack on the first play of the game. He effectively contained Joe Burrow, leading to another sack later in the first half, and was his typical excellent self. Heyward’s still running strong and is showing no signs of slowing down.

T.J. Watt: While the other stars and studs made plays in the first quarter, Watt was briefly forgotten. But he ended the half with a pass deflection, interception, and a great TFL before the second quarter wrapped up. He was excellent, as always, but suffered a potentially serious pec injury at the end of the game. I just hope he haven’t seen the first and last of TJ Watt this season.

Zach Gentry/Pat Freiermuth: The Steelers’ tight ends were the explosive playmakers of the offense. Pat Freiermuth had a 31 yard reception on a nifty reverse flea-flicker, already surpassing his longest catch of last season. A creative tight end screen and good block in space by RT Chukwuma Okorafor sprung him for a 32-yard pickup. Gentry also had a nice third down chip block in the second half that will look tasty on the All-22.

Cam Sutton: Sutton was called for defensive holding in the fourth quarter that wiped out a big third down sack. But beyond that, he was excellent. An interception down the seam undercutting and jumping the route followed by a 1000 IQ play to sink and break up Burrow’s 4th and goal throw in the back left corner of the end zone. The Bengals still tied things up but it was a high-level play.

Diontae Johnson: At one point, Johnson was having an incredibly quiet day, just two catches for eight yards. But he made what I’ll define as catch of the year, a ridiculous one-hand, toe-tap grab along the left sideline in overtime. I don’t know how he did it. Just incredible. If only it could’ve led to the game-winning field goal…

Diontae Johnson with the catch of the year. #Steelers pic.twitter.com/jE4WDkp8hc

Chris Boswell: You kick the game-winner. You get on this list. Simple as that.

Third Down Offense: The Steelers’ offense as a whole was about as poor as expected. Though Mitch Trubisky floated a nice touchdown to Najee Harris and the team hit the occasional downfield play, this unit struggled to find traction. Especially on third down, put into third and long too often and the team unable to convert. The offense as a whole struggled to even string together third downs and this game had big 2019 vibes on both sides of the ball. Dominant defense and an ugly offense.

Pittsburgh finished the day 4/15 on third down and had 13 first downs in five quarters (one from penalty).

Offensive Disconnection: You can just write “offense” under this list and you wouldn’t be wrong. But I’m trying to be more specific in the critique. Especially in the second half, the offense looked a mess. Not only were they unable to execute, they couldn’t even get the play off correctly. Bad snaps, miscommunications, busted screens, heck one time, Kevin Dotson didn’t hear an audible and pulled on a pass play. In a word, this offense looked disjoined. In another, they were brutal. And can’t depend on the Steelers’ defense recording five turnovers every week. It’s not a sustainable model. It wasn’t even enough to win today.

George Pickens: For all the preseason sizzle, there was no Week One bite. Pickens was a non-factor in the Steelers’ offense and lost snaps to Miles Boykin, especially early in the game. He ended the day with just one catch for three yards.

O-line Run Blocking: A unit that struggled to get a push, especially down near the goal line. They had to go through the air to convert their first offensive score to Harris after failing to run it with him in the game. Harris was ineffective and didn’t play his usual number of snaps, losing time to rookie Jaylen Warren.

Pittsburgh lost the point of attack in this one and the run game hasn’t taken any strides from last year to this year.

Ahkello Witherspoon: I know he had one INT today but Witherspoon just didn’t feel sharp today. Late and slow to some of his reads and probably should’ve gotten depth on a great OT catch by TE Hayden Hurst. He, of course, also gave up the game-tying score to Ja’Marr Chase, losing on a quick speed out. It wasn’t the #1 corner performance the Steelers need him to have.