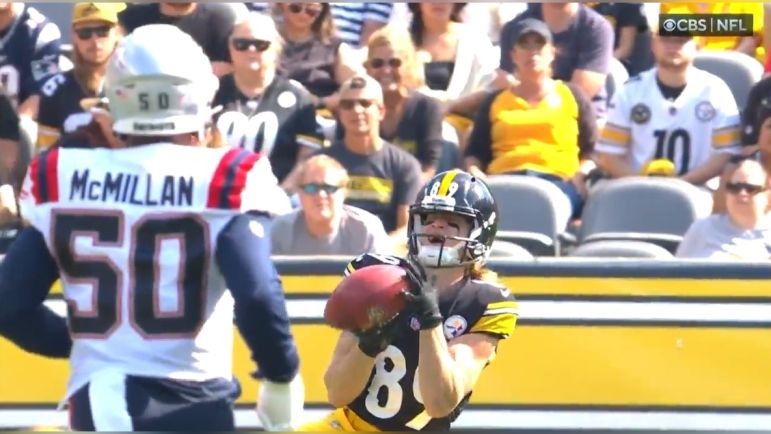 I’ll admit, it’s not often these articles are as cut and dry as this one may be. I’m sure some of you already knew what the ‘turning point’ would be before clicking to read, but listen who am I to complain about making my job easier?

I think I know what @TriggeredWise turning point will be this week.

Let’s not bury the lede, and get right into it. The Steelers allowed a Nelson Agholor touchdown on 3rd & 3 with under a minute left in the first half and were unable to answer on their own drive that was on the cusps of being in field goal range. This left the Steelers’ stumbling offense to play catch-up coming out of halftime. While being down a touchdown may not seem like a ton, any type of deficit with the current state of this offense feels like it’s game over.

The defense came out and had a ‘bend don’t break’ drive as they forced a 52-yard Nick Folk field goal that was pushed right and never was able to hook back in.

*cue the Acrisure Stadium is tough on kickers tweets*

The Trubisky-lead offense was able to string together a field goal drive of their own thanks to the good field position, with a seven-play, 25-yard drive. Boswell boomed a 52-yard field goal of his own to make it 10-6.

The motivation felt like it was fully swinging into the Steelers’ direction. The crowd was into the ballgame and outside of the “flukey” above the rim catch by Agholor the defense was looking solid.

That’s when part one of the turning point happened in this game. Mac Jones was pressured out of the pocket, getting him on the run, and he threw an absolute gift to Cam Sutton. Sutton unfortunately was not able to hold on to the ball as he looks to punch it out of his own arm when trying to get his second hand on it.

It was hard not to have violent flashbacks seeing this play as it had a lot of similarities to a past Steelers-Patriots game in 2017. The game was remembered more so for the Jesse James controversial no-catch, which leaves many forgetting the fact the game shouldn’t have even come down to that.

With 2:06 left in the game, Safety Sean Davis had his own gift fall into his lap. He had the opportunity to be the hero after Cam Heyward tipped a Tom Brady pass at the line of scrimmage, changing the trajectory towards Davis.

He wasn’t able to haul it in.  The rest was history as the Patriots made him pay for the mistake by targeting him and Rob Gronkowski the next three plays before scoring the eventual game-winning touchdown. Oh, and they targeted Davis on Gronkowski on the two-point conversion for good measure.

Regardless of who is the quarterback of the Patriots, you can’t NOT capitalize off their mistakes or they’ll make you pay.

As you know, there’s a second part coming to this, as the Patriots didn’t directly score from the Sutton dropped interception, punting the ball 2 plays later. New England was punting to someone that had something to prove, Gunner Olszewski. Olszewski was an All-Pro returner for the Patriots in 2020 before being let go following the 2021 season that was plagued by fumbles (3).

Unfortunately, instead of showing out against his ex, Olszewski fell flat on his face, or at least, let the football do so.

The missed interception wasn’t a death sentence. The Steelers still should have got the ball back down 10-6, albeit with much worse field position. Muffing the punt all but killed the team’s chances in this game. Adding on the unnecessary roughness penalty on the punt return, the Patriots started this drive on the 10-yard line and despite the defense’s best efforts were able to hit paydirt on 3rd & goal.

Even with one of the turning points happening on defense, you have to feel for them as a whole. In today’s NFL if you only allow 17 points in the game you should be able to win the game. Adding this on top of last week’s performance, which included five turnovers, and still having to win as the clock expired in overtime, it has to be exhausting to the unit’s morale.

A lot of football is simply making the other team pay for its mistakes, on both sides of the football. If the opposing offense gives you a “gimme” interception you have to catch it as much as the offense has to get three points (or preferably seven) when the defense gets you the football. Right now the Steelers are hardly capitalizing on any opportunities that opposing teams present them.