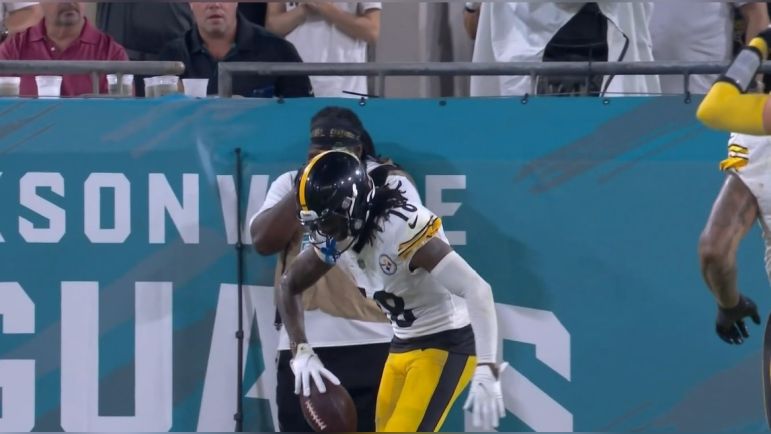 Despite retaining the likes of star running back Najee Harris and true No. 1 wide receiver Diontae Johnson, the Pittsburgh Steelers somehow dropped a surprising seven spots Thursday in NFL.com’s triplets rankings, which was compiled by Around the NFL writer Nick Shook.

Granted, the Steelers did lose future Hall of Fame quarterback Ben Roethlisberger to retirement and have the likes of Mitch Trubisky, Kenny Pickett and Mason Rudolph still battling it out for the starting job in the Steel City, but falling seven spots from No. 17 last season to No. 24 this season feels like a bit of an absurd drop overall.

Sure, Trubisky and Pickett are unknown commodities with the black and gold, but the Steelers feel better off with those two in second-year coordinator Matt Canada’s system than Roethlisberger a year ago, which makes the seven-spot drop all the more puzzling.

For what it’s worth, Shook chose Pickett as the quarterback in the Steelers’ triplets rankings, going with the rookie first-round pick over Trubisky despite it being likely that Trubisky is the guy under center on Week 1 in Cincinnati Sept. 11. The ranking at No. 24 overall has the Steelers sitting just ahead of the likes of the Chicago Bears, Jacksonville Jaguars and Atlanta Falcons, and just behind the San Francisco 49ers, Cleveland Browns and New England Patriots.

“I’m choosing Pickett because I also believe in my heart of hearts that he’ll end up playing more games than Mitch Trubisky this season. I’ve seen enough in the preseason to know he’s the guy Pittsburgh will at least test as its long-term replacement for Ben Roethlisberger. Still, Pickett is an unproven rookie, so he lands near the bottom of the rankings,” Shook writes regarding the Steelers ranking at No. 24 overall for NFL.com. “Harris, meanwhile, carried all of Pittsburgh on his shoulders last season, seeing 381 touches in his first year. He’s a stud, but the Steelers need to be more diverse offensively to truly take advantage of Harris’ abilities.

“Johnson finished 10th in receiving yards (1,161), caught eight touchdown passes and also struggled with drops for a second straight season (especially late in the year). He got paid, but only over a two-year extension, leading me to believe the Steelers still need to see consistency. Overall, though, the Steelers aren’t in a bad place. Rookie standout George Pickens might end up replacing Johnson here before long, too.”

It’s fair to say Pickett is unknown overall, but ranking him near the bottom at the position feels a bit lazy overall. There’s some projecting that needs done there, sure, but you can’t go from saying “I’ve seen enough in preseason” to “We just don’t know’ to slot him near the bottom. He won’t be one of the league’s bottom tier quarterbacks once he’s on the field in 2022.

As for Harris, the Steelers absolutely need to diversify their offense in Year 2 under Canada to get more out of Harris, especially as a runner. A lot of that hinges on the play of the offensive line, but after 381 touches last season (307 carries) the Steelers need to do a better job of getting him into space while also trying to find that delicate balance of lowering his touches to keep him relatively fresh down the stretch.

Too low, or too high? #Steelers #NFL pic.twitter.com/QUq0QSyhqg

With Johnson, it’s the same old song and dance with the national media regarding the Steelers’ wide receiver. To say he struggled with drops for a second straight season is a massive stretch from Shook, one that shows he wasn’t paying close attention and instead leaned into some of the noise he hurt late in the season.

Yes, Johnson had some issues late in the year, but he did not struggle with drops all season. That’s simply false. They gave him a two-year extension to pay him now, allow them to keep a key offensive piece in place to help the development of Pickett into the future, and keep a strength a legitimate strength in the wide receiver room.

This triplet group deserves to be a lot higher than Shook has them. There should be no argument in the world that has Pickett-Harris-Johnson below the likes of Brissett-Chubb-Cooper, Lance-Mitchell-Samuel or even Wentz-Gibson-McLaurin at the moment.