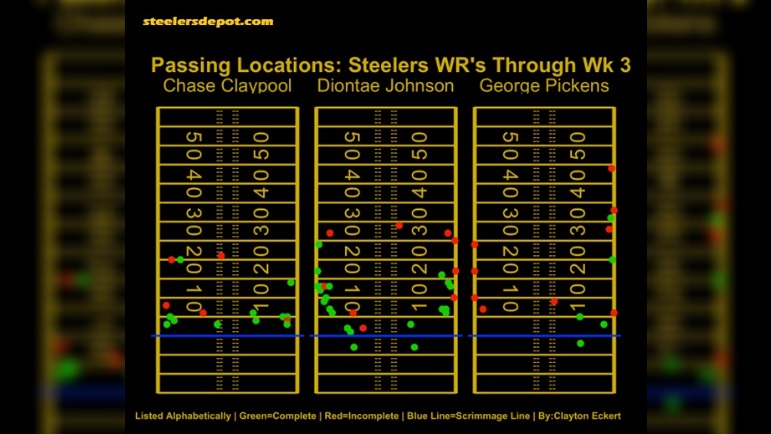 With ten days between the Steelers games this week, I wanted to provide the other side of the coin to my Steelers Quarterback Passing Locations, looking at some of Pittsburgh’s receiving data for the regular season thus far. Thanks to Thomas Mock for his great article that helped me learn much of what I’m using today. Couple notes before we jump in. All yardage referenced are air yards from the line of scrimmage. Bats at the line of scrimmage, spikes, and clear throwaways are removed. 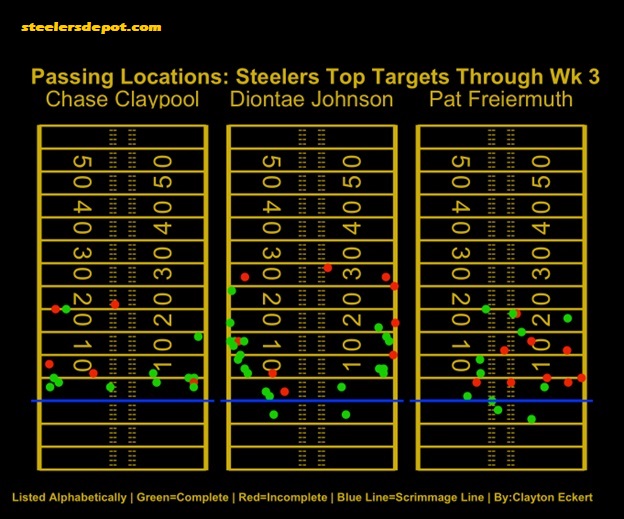 Even though this is a small sample size, the dots really give additional context to the quarterback articles, in many cases confirming and adding context to what we have been seeing and discussing.

Largely, Johnson’s targets have been in the stop/comeback variety along the sidelines at five + yards, with a high completion rate from 5-15 yards especially on the left, and his short targets have been around the numbers. Looking at his incompletions, the right sideline has been the worst spot of connection with quarterback Mitch Trubisky along with only 1/5 on explosive targets. The explosive distances included an unfortunate drop, along with the one completion being the spectacular one-hander from week one, and nearly making another in week two against the Patriots but couldn’t get the second foot inbounds. He also has a couple incompletions on the left side from the numbers to the hash, both slants with the passes out in front of him which I found notable. Will be interesting to see what this looks like moving forward.

Freiermuth has the majority of the between the numbers targets of the three as one would expect from a tight end, but the disparity is staggering. Also staggering is the low catch rate of 55%, compared to a league leading rate for many weeks in 2021 catching passes from recently retired Ben Roethlisberger. The lack of connection with Trubisky has largely been on the right side (2/6 near and outside the numbers), and interestingly hasn’t been targeted on the left side outside the numbers. At or near five yards has been a distance of struggle (1/6), and only one explosive target, right at 20 yards on a great situational throw on the move for a crucial catch in the final seconds of overtime to help position kicker Chris Boswell for the game winning field goal. Hope to see more in the intermediate/explosive areas moving forward considering his 4/5 rate thus far at 15+ yards.

Claypool has been primarily targeted on five yard out routes and is 9/12 at eight yards or fewer. Only one intermediate target, a great throw eluding pressure for a 14-yard contested catch and only third down conversion in the last game when the team went an abysmal 1-9. He is only 1/3 on explosive air yards, with a long of 21. The encouraging part is two of the three opportunities came last game, the first a completion on a great patience throw from Trubisky drifting left to wait for Claypool to come open against the zone just before halftime. The other was an over the middle throw, but into traffic with tight coverage and the hit jarred it incomplete. Would really like to the small trend continue, seeing him utilized down field more.

Here are the heat maps for the first three weeks for more visual context: 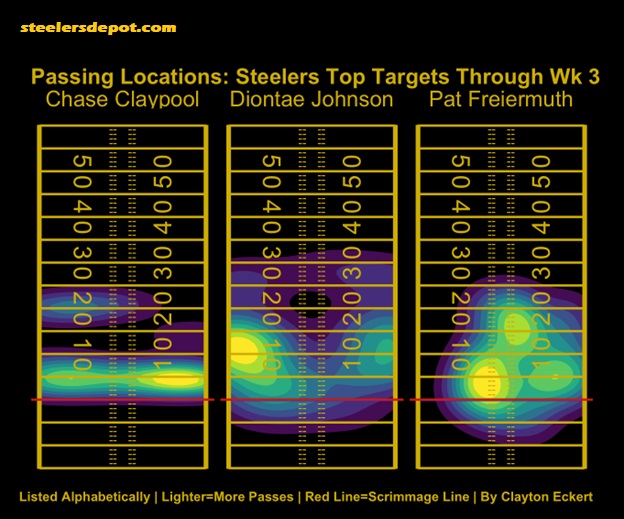 So, the most targeted area for Claypool has been the five-yard out to the right, Johnson on the left outside the numbers from eight to 13 yards along with the most variety and overall targets, and Freiermuth on the left inside the numbers from the line of scrimmage to seven yards. The heat maps will gain much more value as we get more of a sample size, but very interesting nonetheless.

Here is a view of the three most targeted wide receivers, which includes George Pickens (13 targets, but only five catches): 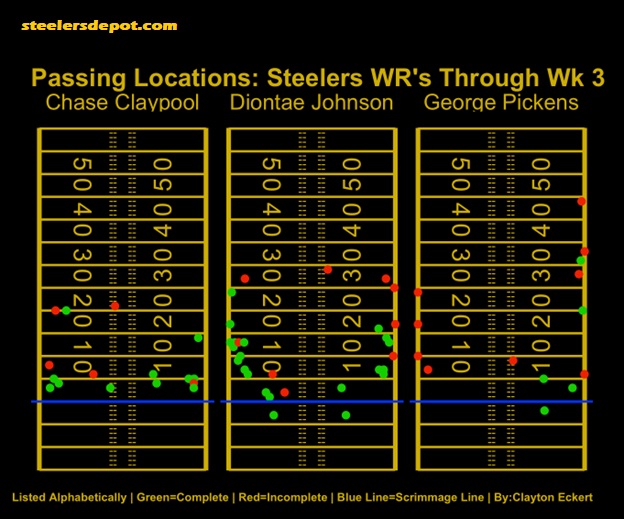 Here we can see how Pickens’ targets compare to Johnson and Claypool, and a couple things jump out right away. First is the high rate of explosive targets, along with the longest pass distance on the season of 44 yards, but important to note this was on an unsuccessful hail-mary heave before halftime against the Patriots. Looking at the explosives overall, 2/6 were completed. The first was a completion just before halftime in week two against the Patriots for 20 yards, and the other the incredible one-handed circus catch last week for 31 yards, the longest completed pass distance on the season. A lack of connection is certainly notable on the left side (more on that in a bit), notable but not concerning yet with the low sample size.

Speaking of important things to note, no wide receiver has a touchdown through three games, will one of the three be able to put an end to this against the Jets?

Running back Najee Harris is the final Steeler with more than ten targets so far, (11 targets, 10 catches) with a 90.9 reception percentage on mostly dumpoffs around the line of scrimmage. The one incompletion was on a wheel route in the fourth quarter against the Patriots in week two that was well defended on a bit of an underthrow. Here are his pass locations through three weeks: 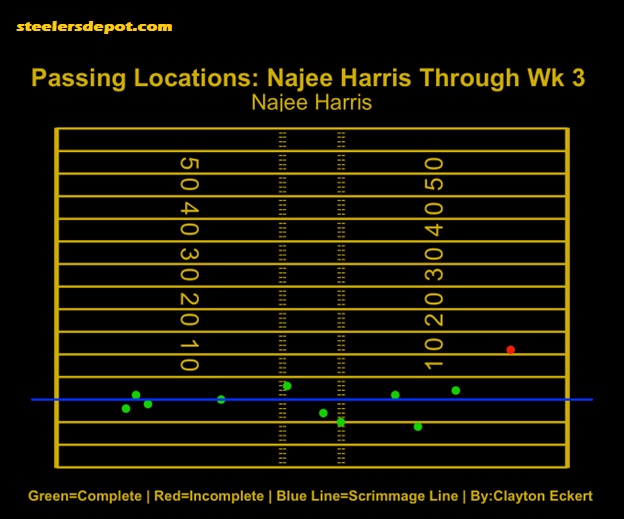 To close here is a very telling heat map of completions only for the wide receivers: 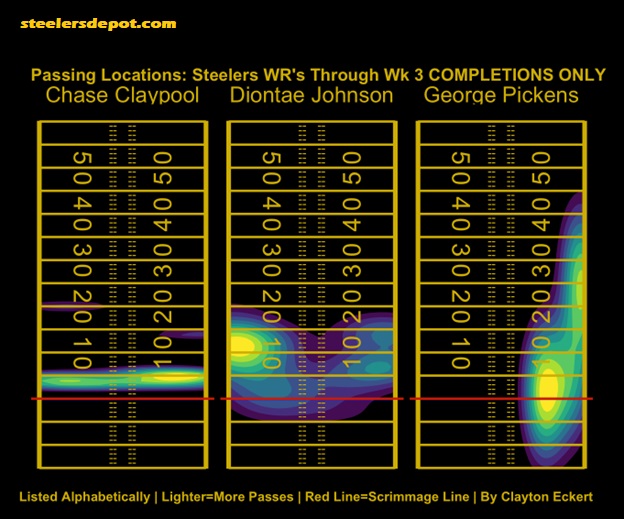 This visual shows the vast difference in how the receivers have been utilized and where their completions have come. The visual really highlights Pickens’ his deep receptions and the right side as the only area of completion thus far. While it’s a small sample it will be extremely interesting to see if this is a trend, along with his extremely low 38.5 catch percentage on his 13 targets. While I went into detail on Johnson and Claypool earlier, thought the vastly different results were extremely notable to compare as we try to answer questions on the struggles of the offense in their 1-2 start. Will Matt Canada and the Steelers offense start run more route variety to open things up, especially for the wide receivers and give defenses more to think about, or will it be more of the same painful offense we’ve seen thus far?

What are your thoughts on the charting and how Trubisky and the pass game have fared this season? What do you anticipate moving forward? Thanks for reading and let me know your thoughts in the comments!