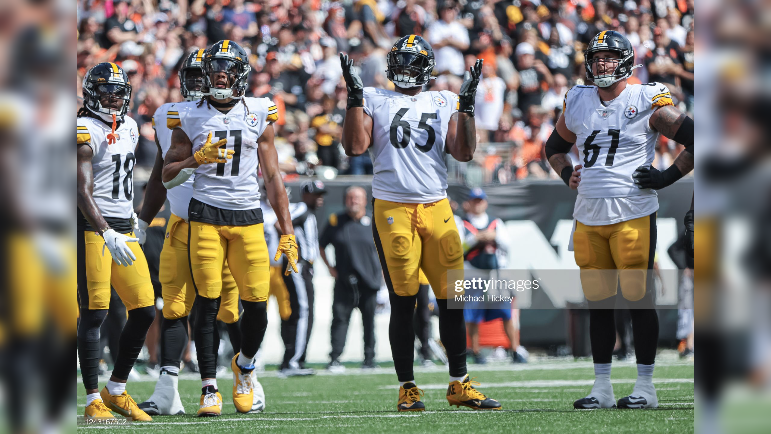 Turns out, concerns about the new-look offensive line for the Pittsburgh Steelers, at least in the run game, ended up being accurate at least for one week.

Against the Cincinnati Bengals in Week 1 at Paycor Stadium, the Steelers’ offensive line struggled to open up rushing lanes for running backs Najee Harris and Jaylen Warren, making the Steelers’ offense mostly one-dimensional in the game. Fortunately for the Steelers, they were able to pick up a thrilling 23-20 win in overtime, thanks in large part to the defense.

While the offensive line really struggled to create movement on the ground against a stout Cincinnati front seven, the Steelers’ much-maligned unit did a nice job in pass protection in front of Mitch Trubisky, for the most part. Still, despite some positives from the win in Week 1, the Steelers offensive line remains ranked at No. 30 overall in Pro Football Focus’ offensive line rankings coming out of the season opener, according to Sam Monson.

According to Monson, second-year left tackle Dan Moore Jr. was the Steelers’ weakest link up front in Week 1. Moore Jr. was called for a holding penalty though he had a 76.8 pass blocking grade in Week 1 and a 68.7 overall grade for the Steelers against the Bengals.

“The Steelers’ line actually held up reasonably well against the Bengals in Week 1 despite Cincinnati still bringing pressure,” Monson writes regarding the Steelers’ ranking at No. 30. “That was in large part because Pittsburgh continued to get the ball out at an absurdly rapid pace. Ben Roethlisberger had the league’s fastest average time to throw for two straight seasons, and Mitchell Trubisky was averaging less than 2.0 seconds per play against the Bengals. Pittsburgh’s line struggled at run blocking across the board, and they will be exposed more if a defense can force Trubisky to hold the ball longer.”

Monson writes that it was less than 2.0 seconds per play from snap to throw for Trubisky on Sunday, yet NFL.com’s Next Gen Stats has Trubisky at 2.67 seconds per throw. Hard to believe there’s that large of a discrepancy. I’ll lean more towards the 2.67 seconds because it certainly was not like the Roethlisberger offense in 2021 on Sunday, at least from the quick throws perspective.

That said, it’s not surprising that the Steelers still wanted to throw short and relatively quick behind a porous offensive line, aiming to protect them and their quarterback against a very good Cincinnati pass rush early in the season, and in a hostile environment.