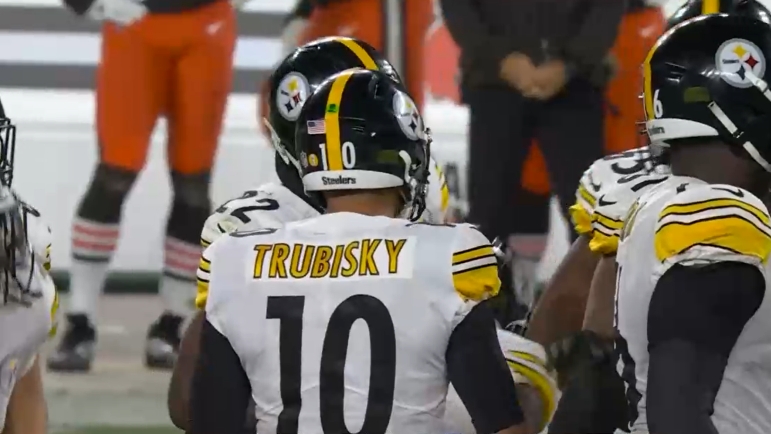 Through three games the Pittsburgh Steelers’ offense has just four offensive touchdowns. In the early 2000s, that style of football might have worked out for a team with a great defense.

In today’s NFL though, that’s not even close to good enough. Everyone associated with the Steelers knows it, including first-year starting quarterback Mitch Trubisky. Despite some of the issues offensively with a lack of consistency and downfield plays, the Steelers are going to “continue to be aggressive” Trubisky said to reporters Wednesday during his weekly media session, according to video via Steelers.com.

“We’re gonna continue to be aggressive. I think, for us, it’s just continue to be efficient,” Trubisky said to reporters Wednesday, according to video via Steelers.com. “I think when you see our offense move the ball forward and just staying ahead of the chains opens up the playbook, allows us to be aggressive mixing in the run, keep the defense off balance. So it’s just about staying on the field, making those plays and letting the big plays happen, but also having that aggressive mindset.”

Reading that, it would be understandable if one scoffed or raised some eyebrows. The Steelers’ offense hasn’t felt quite aggressive to this point in the season.

QB Mitch Trubisky spoke to the media about being more detailed during the week, making big plays, and more.

However, the numbers tell a different story.

According to Sports Info Solutions, Trubisky sits third in the NFL in downfield throws of 20+ yards with 19 attempts on the season. The aggressive mentality is there. The efficiency in which the Steelers are or aren’t connecting on those plays is the issue. According to SIS, Trubisky has completed just six of those 19 attempts, though nine were on target and 13 were catchable.

As Trubisky said, it just comes down to letting the big plays happen. He alluded to those plays being there during his session with the media, and they certainly are. He needs to pull the trigger more often, especially in the middle of the field, but he also needs his receivers to help him out, including Diontae Johnson and George Pickens in the Thursday night loss to the Cleveland Browns.

Both had big drops in big spots, with Pickens dropping a shot play in the second half that should have gone for a touchdown, and Johnson dropping a 3rd and 2 dime from Trubisky that would have been a splash play but instead resulted in a three-and-out.

It’s fine to talk about being aggressive and all, but Trubisky has to do a better job of being efficient as well, as evidenced by SIS’ numbers on third down in the tweet above. He’s throwing far too long past the sticks on third down, and isn’t completing them. Sometimes just moving the chains is a big deal, rather than searching for that splash play.

“Execution on third down, we obviously need to stay on the field,” Trubisky added. “It’s continuing to be aggressive in the fourth quarter and just making those big plays when they come to us. We’ve been in opportunities in the fourth quarter. You can see it on film. I think we just haven’t made the plays yet and that’s just continue to be more detailed in our preparation and within each play that we get.”

We’ll see on Sunday if Trubisky, Canada and the Steelers learned anything over the mini-bye that can be actionable on the field.