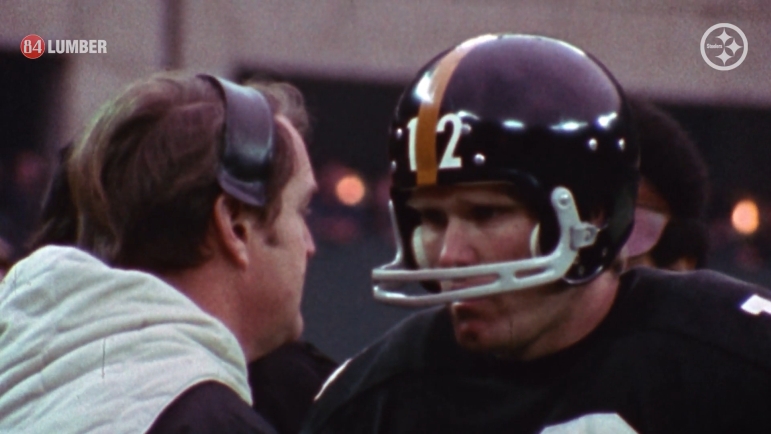 The Pittsburgh Steelers historically have not made it a habit of retiring jerseys, even if they have found numerous other ways to honor the many great players in their history. Many jersey numbers had been officially out of circulation since a legendary player last wore it or soon thereafter, but up until their recent retirement of the number 75 for Joe Greene, it seemed as though it was something they felt it left best to avoid.

Yesterday’s announcement that they would also retire Franco Harris’ number 32 on the 50th anniversary of the Immaculate Reception, however, immediately prompts another conversation: Terry Bradshaw’s number 12 jersey now must be retired as well, and in the relatively near future.

In no way a slight to the tremendous legacy Franco Harris left behind and what he has meant to the Steelers organization both as a player and as an individual, the Steelers simply never had a dynasty without Terry Bradshaw.

A perceived country bumpkin, the characterization of which he very much played up to for his own benefit, Bradshaw is often somewhat overlooked in spite of the immense legacy that he left behind. Perhaps in part because his career only gradually blossomed into that with which we most associate him, there is simply no other way to say it than that the Steelers should assure officially that nobody ever wears the number 12 ever again.

As said, he didn’t always get his due, but while it did take him some time to fully mature as a quarterback, for a variety of reasons not all his own fault, he was unquestionably one of the premiere quarterbacks of the game in the second half of his career, and he thrived about as much as anybody else following rule changes that benefited the wide receivers and allowed them more protections.

From 1977 through the 1981 season, Bradshaw threw for 15,388 yards and 117 touchdowns while averaging 7.9 yards per pass attempt. Granted, he also threw 100 interceptions, but those numbers were not atypical for the era.

Moreover, Bradshaw threw for nearly 4,000 yards and for 30 touchdowns over 19 career postseason games, in which he went 14-5 as the starter of record, still among the very best marks in NFL postseason history.

Nine of those touchdown passes came in Super Bowls, in which he reserved some of his best performances, throwing for over 300 yards in each of the 1978 and 1979 championships over the Dallas Cowboys and the Los Angeles Rams, respectively.

The prior stance the Steelers appeared to have regarding retiring numbers when only Ernie Stautner’s 70 stood alone was perfectly fine. But now that they have opened the door just another crack, it has also become inevitable that the number 12 must join 70, 75, and 32 as the indelible digits never to be worn again in the black and gold.