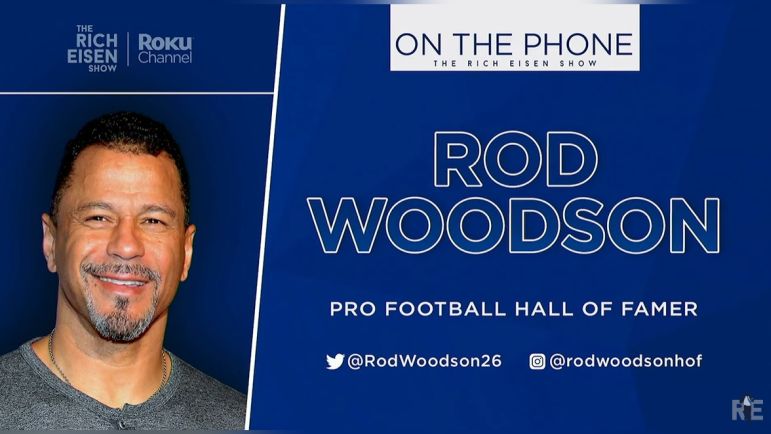 In the second half of Sunday’s 17-14 loss to the Patriots, Steeler Nation was letting the coaching staff and front office know loud and clear who they wanted to see under center, and in case you missed the game, it was not Mitch Trubisky. In April’s draft, the Steelers made local hero and Heisman Trophy Finalist Kenny Pickett the only quarterback drafted in the first round, and despite vows to bring him along slowly, he ascended from third-string to the direct backup to Trubisky after an impressive preseason.

Trubisky’s ineptitude in leading the offense through the first two weeks is less than inspiring, and is a major reason why he was ousted in Chicago. Whether it’s fair to lay the blame at his feet or Offensive Coordinator Matt Canada’s is more food for thought, but earlier today on The Rich Eisen Show, special guest and Steelers Hall Of Famer Rod Woodson let it be known what he thinks is Head Coach Mike Tomlin’s thought process on the issue.

Point blank, Woodson said he thinks the only reason Tomlin is going with Trubisky over Pickett is because he’s a faster scrambler, which behind a porous offensive line, makes a ton of sense.

“I think they do still have some issues on the offensive line, but I would go with the young kid,” Woodson said on The Rich Eisen Show via YouTube. “He looked better in the preseason, Pickett played great, or good enough football. He’s a young player who can get rid of the football, they’ve got a young receiving corps, they’ve got a young running back. Let them grow together.”

The Steelers possess arguably an embarrassment of riches at the skill positions. Wide receiver is a strength, with Diontae Johnson already a Pro Bowler, and Chase Claypool is an athletic freak who, if on a team, say like Green Bay with Aaron Rodgers, I can confidently say I could see him posting 1,400 yard and double-digit touchdowns annually. George Pickens looks like the real deal and next in-line in the team’s wide receiver draft steals, and second-year tight end Pat Freiermuth looks like the next coming of Heath Miller. Najee Harris is the prototypical workhorse running back Tomlin loves to feature, the only ailments of the offense are the line, the QB and perhaps the main culprit, OC Matt Canada, in whatever order you prefer.

Perhaps Tomlin is keeping Pickett under wraps, as the team is about to wade into murky waters with the meat of their schedule approaching, with playoff powers like Buffalo and Tampa Bay on the horizon. To Woodson’s point about Trubisky’s mobility, it makes sense to a certain degree, because he ran a 4.67 at the NFL Combine. However, Pickett also ran a fast time, clocking a 4.73. Regardless though, if the offense’s stagnation continues, I would be shocked if Tomlin didn’t insert Pickett into the lineup to give them a spark while also staking his claim as the team’s next franchise signal caller.

“I would personally love to see Pickett in there, especially with that young receiving corps they have.”