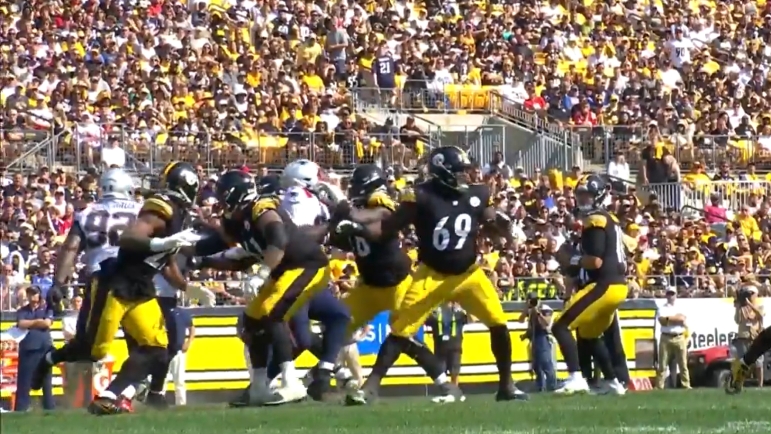 One week into the 2022 NFL season, the Pittsburgh Steelers offensive line remained seemingly at the bottom of the NFL when it came to position rankings from Pro Football Focus’ Sam Monson.

Now, after a second decent week in a row, this time against the New England Patriots, the Steelers’ offensive line is starting to slowly, steadily climb the positional rankings from PFF.

Coming off the Week 2 loss to the New England Patriots in which the Steelers’ offensive line protected quarterback Mitch Trubisky rather well and showed some signs of life in the run game, the unit moved up from No. 30 to No. 28 Wednesday in Monson’s rankings, passing the likes of the Las Vegas Raiders and the New York Giants in the process.

“The Steelers’ line is still very difficult to fairly evaluate because the entire offense looks designed to prevent them from ever having to pass block for a significant period of time,” Monson writes for Pro Football Focus. “The entire line has allowed just seven total pressures, but that comes with the aforementioned caveat. As run-blockers, only Chukwuma Okorafor has an above-average grade. Cleveland presents the obvious challenge of Myles Garrett, but the rest of their defensive front is far less formidable.”

Chukwuma Okorafor is having a very solid start to his fifth season in the NFL, which is what the Steelers expected when they re-signed him to a three-year deal prior to free agency, ensuring the right tackle stuck around awhile. He’s handling his own in pass protection and is the Steelers’ best run blocker through two weeks.

Gotta give OT Chukwuma Okorafor a lot of credit. He's more than held his own the first two weeks of the year. Quickest to adjust to Pat Meyer's scheme. Played well Sunday. Really quick out of his stance. Always first to fire off the ball. #Steelers

As far as the belief that the Steelers’ offensive line is being covered up by the quick snap-to-throw numbers once again this season, Monson is simply wrong in this regard. According to NFL.com’s NextGenStats, quarterback Mitch Trubisky is averaging 2.61 seconds to throw the football after the snap, which puts him in between Detroit’s Jared Goff and Kansas City’s Patrick Mahomes for ninth-fastest in the NFL.

That’s behind names like Tom Brady, Josh Allen and even Aaron Rodgers. Nobody is saying anything about the offensive lines on those teams being issues and needing to be covered up in the passing game, so why does it continue with the Steelers? They aren’t the best offensive line in the NFL, that much is certain, but they’re playing well from a pass protection standpoint, which should be commended.

As they continue to gel together and improve, the play will get better. There’s talent there on the offensive line, it just takes time. Patience is required.