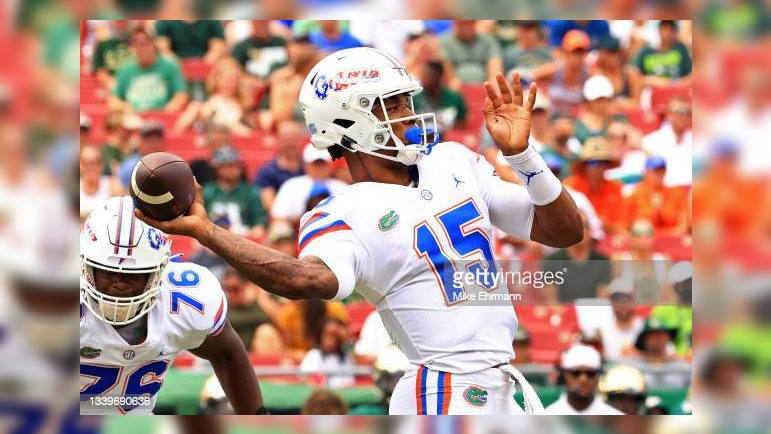 The Florida Gators knocked off the Utah Utes in Gainesville Saturday, winning a nail-biter 29-26. For the Gators, their star QB Anthony Richardson stole the show with his dynamic playmaking ability. Richardson didn’t record a passing TD Saturday night against the Utes, but he went 17/24 for 168 yards. Richardson made his impact as a runner in The Swamp, toting the rock 11 times for 106 yards and three TDs including a 45-yard scamper where he blew past the Rice defense.

Richardson is an elite athlete, having the speed and explosiveness to create on the ground as well as the arm strength to drop bombs deep down field. Built in a similar mold to Cam Newton and Vince Young, Richardson could play himself into conversation as one of the top QB prospects in 2023 if he continues to build off his performance.

Still thinking about this Anthony Richardson play from last night 🤯

The Bearcats fell short to the Arkansas Razorbacks in Fayetteville Saturday afternoon, but LB Ivan Pace Jr. had himself a day on the defensive side of the football in his Cincinnati debut. The senior linebacker recorded 12 total stops, 3.5 TFLs, and a sack in an admirable performance despite losing to Arkansas 31-24. Pace is a downhill thumper against the run, having been named the MAC Defensive player of the Year last year when at Miami of Ohio. Now on a bigger national stage, Pace can play himself into conversation as one of the most pro-ready prospects at his position while facing better competition.

The Georgia Bulldogs wiped the floor with the Oregon Ducks Saturday afternoon, winning in convincing fashion 49-3. The defensive effort by the Dawgs was exceptional, being headlined by S Christopher Smith who finished the afternoon with six tackles, a TFL, a PBU, and an INT. Smith came back after being draft eligible last season to boost his stock, recording three INTs in 2021. He has a nose for finding the football, potentially providing NFL teams a ballhawk to target in the middle rounds once the 2023 NFL Draft rolls around next spring.

Had a horse-collar penalty earlier but just made up for it with this INT 🔥pic.twitter.com/YA6TwQkl7m

Alabama took Utah State to the woodshed Saturday night to the tune of a 55-0 shutout. Heisman winning QB Bryce Young was exceptional in the blowout, going 18/28 passing for 195 yards and five passing TDs while chipping in five carries for 100 yards and a TD. Young was extremely efficient against the Aggies defense as a passer, having nearly a third of his completions go for TDs. He also showcased more as a rusher on the ground, something that will be a key factor in determining his draft stock as a top QB prospect. If he continues to be effective as a pass and shows consistency as a rusher, Young could lock himself to be the #1 overall pick this spring.

What a play by Bryce Young 🤯🔥 pic.twitter.com/g3vSNhS6Qo

The USC Trojans decimated the Rice Owls 66-14 at the Coliseum Saturday afternoon. The Trojan defense themselves and a day, picking off four passes of which they took back three of them for touchdowns. One of those pick sixes was made by former Alabama LB Shane Lee who had himself an exceptional performance in the contest as he recorded eight tackles, two TFLs, a PBU, and a 40-yard INT return TD. Lee transferred to USC in the spring of 2022 from Alabama after getting passed up on the depth chart the last two seasons and appears to have found a home in Southern California. Should he continue to be productive against tougher competition, expect to hear his name gain steam closer to draft season.