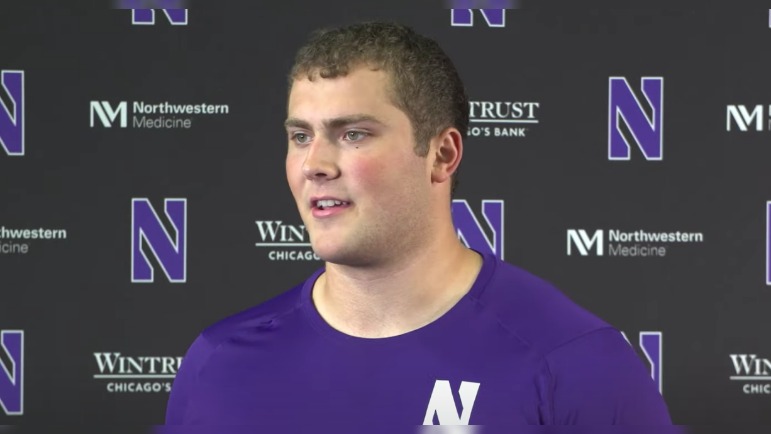 The Northwestern Wildcats topped the Nebraska Cornhuskers in college football’s kickoff last weekend, beating the Big Ten rival in a conference clash across the pond in Dublin Ireland 31-28. The Wildcats rushed for over 200 yards and QB Ryan Hilinski threw for 314 yards and two scores on the day in large credit to the performance of the offensive line.

The headliner for the big uglies upfront is LT #77 Peter Skoronski. Skoronski has been touted as one of the best OT prospects in the 2023 draft class, being named first-team All-Big Ten last season while also earning All-Big Ten second team honors in 2020 when Rashawn Slater sat out during the season due to the pandemic. Skoronski has the pedigree, being a former four-star prospect coming out of high school as well as the athletic background having been a three-year letterwinner in basketball and track & field while dominating on the high school gridiron

So, how did Skoronski hold up Saturday against Nebraska? Quite well, to be honest with you. He showed strong fundamentals and technique at the position, finishing as Pro Football Focus Offensive Player of the Week. According to their charting, Skoronski played 39 pass blocking snaps and allowed zero sacks, positing an 89.8 overall grade. When you watch the tape, you see a clean prospect in terms of picking up pass rushers and adjusting to what the defensive line is doing in front of him. On this rep, we see Skoronski pick up the twist by the tackle and end, keeping the defender out of the pocket to give Hilinski time to throw.

One thing that stood out to me about Skoronski in pass protection is his kick step. Notice here how he violently drives that left leg back on the snap of the football to set the depth of the pocket, being somewhat like Packers LT David Bakhtiari the way he gains ground quickly in his pass set. The defender fails to get the corner and Skoronski keeps him in front of his frame to stop the rush altogether.

This next pass set from Skoronski showcases his football and body control in unison with one another watch how he initially gives ground on the rep but extends his torso and digs his heels into the ground to neutralize the rush. He then mirrors the pass rusher inside with good lateral shuffle to keep from getting beat across his face. The pass rusher gets close to the QB, but Skoronski keeps his passer clean.

Still, there are some instances on tape that highlight Skoronski’s physical flaws. He doesn’t have the longest arms and doesn’t have ideal size at the position, lacking the physical strength to overcome power moves on the edge. On this rep, we see Skoronski get out quick of his stance, but allows the defender’s hands inside his chest as he crosses his face on the bull rush, getting pressure n Hilinski as he lets go of the pass.

Here’s another example where we see the pass rusher use straight power to walk Skoronski back into the back of the QB in the pocket, nearly letting the defender get to his QB who manages to get the ball off just in-time.

Still, while Skoronski lacks ideal size and strength at OT, his technical skill paired with his effort often makes up for the physical deficiencies. Here in the run game, we watch Skoronski combo up to the backer in the box, latching on and turning his shoulders just enough to spring his running back free into the second and third level of the defense. He ends up fumbling the ball, but a great block to get him into the open field.

Skoronski may not be the most athletic specimen at the position, but he has a good baseline level of athletic ability given his multisport background in high school. Here is a good example of his athleticism on display where he is asked to pull from the tackle spot up the middle to lead block for the runner. He successfully locates the linebacker coming down to fill and runs him backward, finishing on top of him after a good pickup on first down.

Skoronski came up clutch as a run blocker to close out the game for the Wildcats, having the RB go off his backside both for the go-ahead score as well as one the drive to run out the clock. Watch how Skoronski successfully turns the shoulders of the defender in both plays, creating a pathway for his back to run right off his butt into the second level.

Overall, it was a great debut for Peter Skoronski who came in as a projected first round pick in the 2023 NFL Draft. He didn’t do anything to drop his stock in this contest and likely boosted it based on his performance. His lack of ideal height, size, and arm length will likely concern some teams, needing to add more strength and anchor to his frame to better defend power rushers. However, he is technically sound when it comes to run blocking and pass protection combining his emphasis on fundamentals along with the effort on each play to execute his job into a noteworthy performance.

The Pittsburgh Steelers could be in the market for an offensive tackle early in the 2023 NFL Draft should they decide to pull the plug on Dan Moore Jr. being the LT of the future for the team after the 2022 season. While he may need some more work in the weight room to hone in his battles versus power, Skoronski should be a name Pittsburgh will keep an eye on when looking at OT prospects in the upcoming draft class.