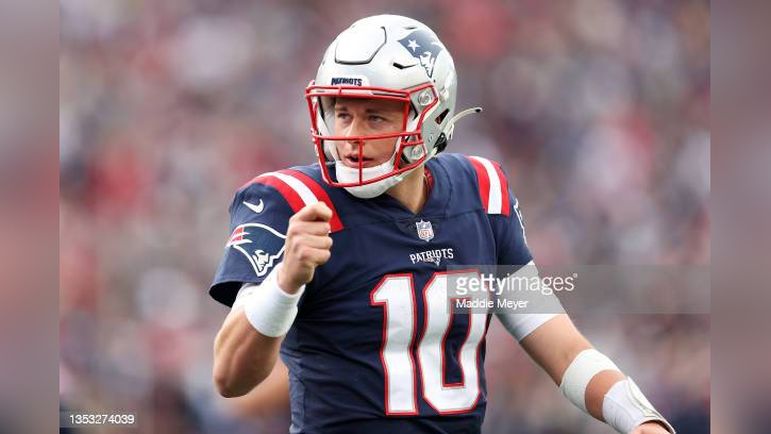 It’s only been one week and scouting is in a bit of a weird spot. 2021 feels outdated, the preseason feels useless, but a one-week sample size isn’t the easiest to work off of, especially when it’s not a divisional opponent like the Cincinnati Bengals.

I’ll primarily work off what the Pats did in their season-opening loss to the Miami Dolphins, a 20-7 defeat. The carries were spilt almost evenly with the team’s top two backs, Damien Harris (9) and Rhamondre Stevenson (8) with Harris out-snapping Stevenson 22-14. Harris was the more effective of the two. Ty Montgomery worked as a third down back (21 offensive snaps, in part due to the team playing catch up) but landed on IR after the game.

They remain a tight end heavy team with their top two, Hunter Henry and Jonnu Smith playing 77 and 68% of the snaps, respectively, despite the team trailing throughout the game. In the first half of the game, they had a balanced pass/run split. 14 throws, 11 carries.

Conceptually, there’s a mix or man, zone, and gap. The most important takeaway of their run game is their toss game. Crack toss and zorro runs. Zorro is popular with Kyle Shanahan and the 49ers, a fast motion run like you see in the first clip, though this is a handoff and not a toss.

They also have a combination of man and zone runs though their zone runs haven’t been incredibly effective. They’re going to get the ball out on the perimeter and force cornerbackers to make plays. Check out #1 in a reduced split come down on the safety here trying to fill the alley. Pittsburgh’s gotta be ready for that this weekend.

The key for New England this week is taking care of the football. They turned the ball over three times against Miami, two fumbles and a pick, and were -3 in turnover differential. They also went just 40% on third/fourth down combined (4/10).

Led by QB Mac Jones, fully expected to play this weekend. In the opener, he completed 70% of his passes, throwing one touchdown and one interception, the latter a go-ball against single high/MOFC that was picked. Jones spread the love with four different receivers catching 3+ passes and a whopping nine players catching at least one of his completions. WR Jakobi Meyers was the leading receiver, posting a 4/55 line. Kendrick Bourne was apparently in the Pats’ dog house and played just two offensive snaps but caught one pass for 41 yards. He should play more this weekend.

They like to use a lot of 2×2 Twin WR looks with two wide receivers to one side and two tight ends to the other. Pittsburgh doesn’t travel corners so they’ll have to either roll the safety down, limiting their coverage options and messing with run fits, or walk an OLB out and play a lot of zone. Could be an issue. 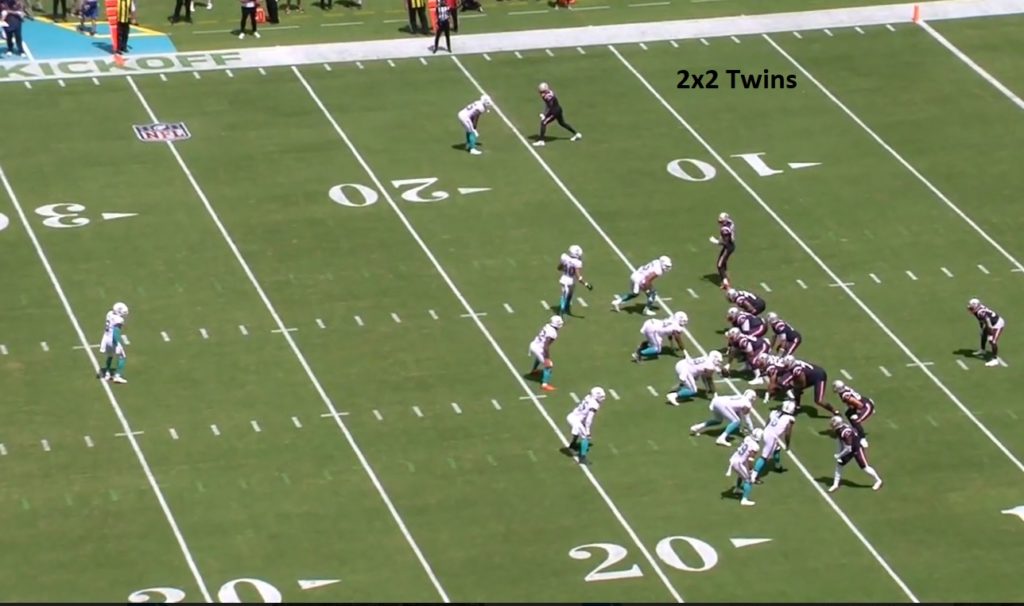 They mirror a lot of their concepts and on 1st and 10, like to run ten-yard outs with #1’s. Reduced splits indicate it. Examples.

Like I wrote above, Jones will be choosy with his deep shots and throws them outside the numbers against Cover 1. He has a tall jump-ball receiver in Meyers who made a great catch down the sideline last week.

Against MUG/aggressive A-gap blitzes, they’ll use a “sniffer,” moving the back into the A gap to potentially dissuade teams from those double barrel looks. Watch the Dolphins check out of it here. 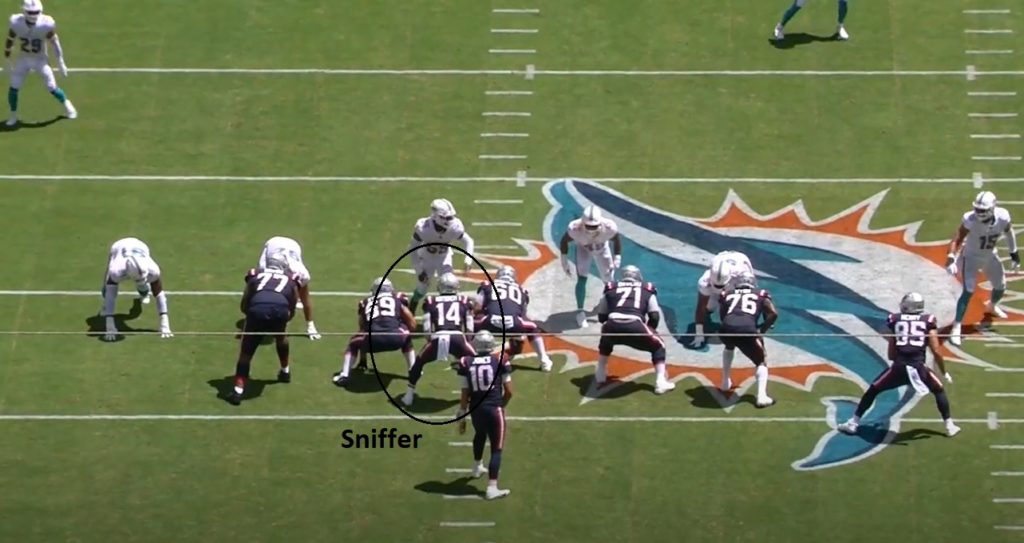 Protection-wise, they have a rookie left guard in Cole Strange. Maybe it’s the rest of the line but he looks small at 6’5, 305, with 33-inch arms. Someone Cam Heyward should overpower him. They ran a fire zone past him last week for a sack. They had an issue picking up a late nickel blitz last week, leading to Jones being stripped of the football and returned for a touchdown by the Dolphins’ defense. Pittsburgh effectively used their nickel blitz, a four-man pressure playing Cover 2 behind, with Arthur Maulet coming off the edge. Something they could do again, though I imagine New England will be correcting those issues.

For the first time since 1998, the two historic franchises will met up without the likes of Tom Brady and Ben Roethlisberger under center, which is rather weird overall.

That said, there is plenty of intrigue for the Week 2 matchup at Acrisure Stadium as the Steelers get their first look at the Patriots with Mac Jones, and without longtime offensive coordinator Josh McDaniels.

Currently, the Patriots don’t have an offensive coordinator, which is a bit odd for an NFL team with a second-year quarterback. That said, I do like what I’ve seen so far from Jones.

He’s a bit banged up coming into the Week 2 matchup, but he’s very much like Tom Brady in his pre-snap reads, ability to process quickly after the snap, high-level accuracy and timing, and his touch on deep balls.

That’s not me saying he’s Brady whatsoever, it’s just that the traits and play-style are similar, which is likely why head coach Bill Belichick and the Patriots were interested in the first place.

Jones doesn’t have the biggest or the strongest arm, but he makes up for it with his ability to win pre-snap. He knows where he’s going with the football often before the snap due to what looks the defense is giving him.

Adequate arm strength to hit certain windows is good enough for Jones and good enough in the Patriots’ offense.

That said, his deep ball sure is a thing to see, especially with the accuracy he possesses.

He doesn’t have the best weapons to work deep with, but he showed decent rapport with Nelson Agholor in the preseason, dropping this one into the bucket against the Panthers.

The one guy he does seem to trust right now on deep balls in 50/50 situations is Jakobi Meyers. Meyers isn’t a burner by any stretch of the imagination, but he has good body control, huge hands and plays through contact well, as he showed on this catch against the Dolphins in Week 1.

Outside of Hunter Henry, Meyers is the top target for the Patriots.

Speaking of Henry, that’s the guy Jones consistently finds when things break down. He’s the first guy Jones’ eyes go to. He has a great feel finding the soft spot in the zone and has consistent hands.

Against the Raiders in the preseason, Jones showed his ability to slide around in the pocket with great awareness and then was able to throw on the run and find Henry for the big gain.

Make no mistake though: this Patriots offense is built around a powerful rushing attack that is currently shifting more towards a zone scheme than a power scheme that the team has employed in recent years.

With the combination of Damien Harris and Rhamondre Stevenson, the Patriots can bludgeon teams on the ground.

The toss is a staple of the Patriots’ offense. Three times in three games the Patriots busted out the same exact play, getting left tackle Trent Brown and tight end Jonnu Smith out in front of the running back in the zone scheme.

Each time the Pats ripped off big gains.

I do like Harris a ton. He’s a former 5-star running back that has great vision and runs downhill with force. He consistently falls forward and can really wear on defenses.

He was very effective early against the Dolphins in Week 1, but the early deficit forced the Patriots to move away from the ground game. They’ll want to lean on him in Week 2, especially with Jones a bit banged up.

They’ll be able to do so behind a strong run-blocking offensive line. Here’s how I expect them to line up left to right on Sunday:

I am a big, big fan of Onwenu. He’s one of the strongest interior linemen in football. His power is insane, especially in a phone booth. He showed the Dolphins that in Week 1.

He’s a real force in the run game. He’s a people mover and really provides the Patriots with that physical element. That’s what they hope Strange is too, though they may have overdrafted him a round or two too early.

The tackles are decent on paper, though Brown is much better at right tackle than left tackle. Wynn was on the trade block all summer long, but seems to have settled into the right tackle spot.

Andrews remains a stalwart at center for the Patriots. Quietly one of the most underrated pivots in the NFL.

On special teams, the Patriots quietly remain strong with the tandem of Nick Folk and Jake Bailey at kicker and punter. Folk has settled in nicely with the Pats, while Bailey — a left-footed punter — is really good at directional punting. Long snapper Joe Cardona is quietly one of the best ones in the NFL.

We’ll see what the Patriots do in the return game with Ty Montgomery now on injured reserve. Based on the depth chart safety Kyle Dugger is the next man up on kick returns, while Meyers is next up on punt returns.