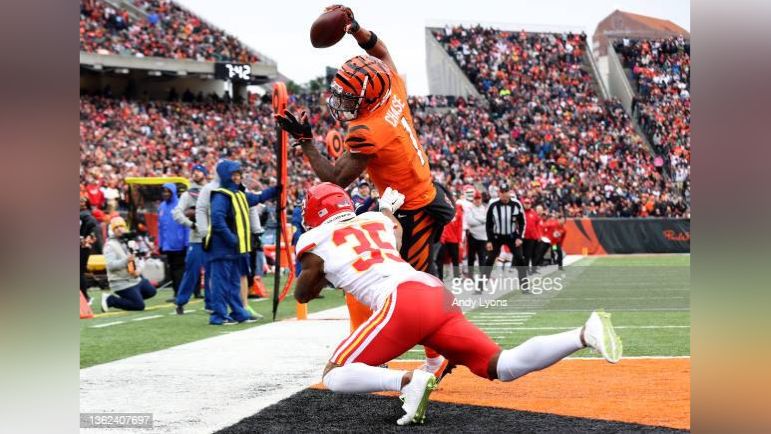 Cincinnati’s pass game receives all the attention for their dramatic turnaround last season but their run game shouldn’t be ignored. It’s been a consistently solid part of their offense for years, led by RB Joe Mixon, one of the league’s most underrated workhorse runners. Here’s my favorite Mixon stat. Since 2018, the last four seasons, only two running backs have posted 1100+ rushing yards in 3+ seasons. The two? Dalvin Cook and Joe Mixon.

In games he participated in last year, Mixon was on the field for 67% of the offense’s snaps, a high number in this era. Last year, he rushed for over 1200 yards at 4.1 per carry and he’s an all-situations type of player, even if they’re generally not a big play or incredibly efficient run game. A below-average offensive line hasn’t helped Mixon or this run game either and as Josh will outline below, it looks a lot different this season. Samaje Perine is the backup, a big build, while Chris Evans is a pass-down back.

Their base run scheme is inside zone which they’ll run to the field and boundary. Mixon possesses plus vision and is able to find the hole, trying to make the defense “wrong” based on how they fill and fit their gaps. Here’s a couple examples:

There’s some man/duo blocking in short-yardage and down near the goal line. Not many gap runs but they will pair their trap pass with an actual trap/gap run. Back-to-back plays in the preseason finale against the Los Angeles Rams. Trap pass followed by the actual gap run.

Their run game had eight runs of 20+ yards last season, tied 22nd in the league. It’s a steady but not spectacular run game but Mixon isn’t a name to forget about.

Of course, the talk about the Bengals’ offense revolves around the passing game. The monster turnaround in 2021, becoming one of the most explosive in football. Last year, they ranked 7th in points per game, jumping from 29th in 2020 and 30th in 2019. They put up 30 points in seven of their regular season games and 40+ in three of them, the latter all coming against AFC North opponents – twice versus the Ravens and once against the Steelers, 41-10.

Burrow was a major catalyst for the spike in offensive output. His YPA rocketed from 6.7 as a rookie in 2020 to 8.9 in 2021, an insane year-to-year jump. Throwing to old college teammate Ja’Marr Chase certainly helps and he had one of the most incredible rookie years in NFL history, finishing the year with 81 receptions for 1455 yards and 13 touchdowns. That comes out to an average of 18 yards per catch, one of just seven seasons in NFL history where a player caught 80+ passes for 18+ YPC. Josh Gordon was the most recent in 2013 while Jerry Rice did it twice. Last year, Chase caught eight of his nine targets in two games against the Steelers.

Schematically, they love smash routes and in general, out-breaking routes to the sideline. Smash is a low-high read of a curl/flat and corner route. Best against C2 defenses to put the CB in the flat in a bind and force the safety to cover a lot of ground to squeeze the corner route. They’ll often mirror those routes to both sides, too. A couple examples:

They’ll use this on any down and situation but they like it around the ten yard line and the middle of the red zone. Those concepts were the ones that stuck out to me the most. Other ones include boots and rollouts off their split zone looks and some Dragon (slant/flat) concepts too. The Bengals do a good job varying formations, capable of going balanced, empty, and reducing splits. Here’s their boot shallow cross that would’ve been a completion had it not been for a bad throw by the backup quarterback.

Just like that, the 2022 NFL season is here, and it starts with a bang for the Pittsburgh Steelers with a tough season opener on the road against the AFC North rival Cincinnati Bengals at Paycor Stadium.

Last season, the Bengals owned the Steelers on the ground and through the air offensively, rolling to two wins and the AFC North crown by outscoring the black and gold by a score of 65-20 over the two games.

Burrow sees the return of his trio of standout weapons in passing game in second-year star Ja’Marr Chase, veteran Tyler Boyd and emerging star Tee Higgins at receiver, all three of whom gave the Steelers a handful last season.

Chase is Burrow’s go-to target, as is well known, dating back to their time together at LSU in college. Chase will take the top off of defenses and is dynamic after the catch with his lightning quick speed and good vision to find the open field.

He can haul in a 70-yard touchdown downfield or turn a screen pass into a 50-yard gain in the blink of an eye. He’ll need coverage rolled his way.

As that happens, that frees up Higgins, who is a height/weight/speed matchup nightmare, especially over the middle. He’s essentially the possession receiver for the Bengals, one that will consistently move the chains through contact, but will also go downfield and make the big play getting underneath a deep shot from Burrow.

Boyd in the slot remains that steady presence for the Bengals, one who brings the physicality to the position. He’s not as dynamic after the catch as Chase or Higgins, but he’ll make the tough catches and be that security blanket over the middle, especially on RPOs from Burrow.

Speaking of Burrow, fully healthy now after that devastating knee injury suffered as a rookie, he’s poised to truly take off in his third season, ascending into that elite tier of quarterbacks in the NFL.

He doesn’t have the biggest or the strongest arm, but he’s exceptionally accurate, throws with great touch and anticipation and brings sound pocket presence and awareness to the table. Despite not being much of a running threat, Burrow is really strong against RPOs.

Behind Burrow, Joe Mixon returns for another season in Cincinnati as one of the most underrated running backs in the NFL. He’s a great combination of size and speed in the backfield and has great vision, often hitting the cutback on the outside zone, ripping off explosive runs on the cutbacks, gashing unsuspecting defenses.

He was a handful for the Steelers’ depleted run defense in 2021, so it will be a significant test right out of the gate for Pittsburgh. Backups Samaje Perine and Chris Evans are an intriguing blend of power and speed out of the backfield.

Perine will serve as that short-yardage type, while Evans is the pass-catching guy out of the backfield, one that is poised for a big second season in the NFL.

At tight end, the Bengals let Burrow’s right hand man in CJ Uzomah walk in free agency to the New York Jets and brought in veteran journeyman Hayden Hurst. That might be a bit of an upgrade in the passing game, but losing Uzomah as a blocker is a big blow.

Speaking of blocking, a lot of attention will be paid to the Bengals’ new-look offensive line early in the 2022 season. After watching Burrow get battered around in the playoffs and the Super Bowl last season, the Bengals went out and spent money on center Ted Karras, guard Alex Cappa and right tackle La’el Collins in free agency.

On Sunday, here’s how I expect the Bengals to line up in the trenches on Sunday:

I really, really like this projected group on paper. Karras, Cappa and Collins represent significant upgrades along the offensive line, and I am a huge fan and believer in Volson, whom I saw in person at the Shrine Bowl in February.

He was one of the Day 1 ready guards in the draft, so it was surprising to see him fall. The Bengals took advantage, and turns out he’s a Day 1 starter. He’ll have his hands full with Cameron Heyward, but that’s for sure a matchup to watch throughout Sunday’s season opener.

On special teams, the Bengals remain super solid once again, led by Pro Bowl kicker Evan McPherson, who had ice in his veins in the playoffs, drilling kick after kick as a rookie as the Bengals made a run to the playoffs.

He’ll be even better in his second season having added strength.

Veteran punter Kevin Huber returns, having beat out Drue Chrisman for the job in a surprise decision from the Bengals. Huber doesn’t have the biggest leg, but he’s good at directional kicking and pinning teams deep. That’ll come in handy for Cincinnati.

Evans will handle the kick return duties and is dynamic with the football in his hands dating back to his time at Michigan, while steady Trent Taylor returns to hold down the punt return duties, though he was limited during Thursday’s practice due to a hamstring injury.