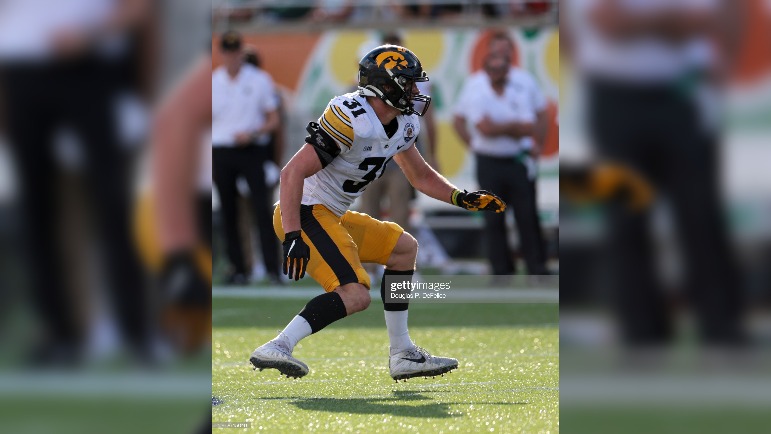 Two of college football’s most prestigious programs will do battle down in Austin, TX Saturday with the Alabama Crimson Tide traveling to take on the Texas Longhorns. For the Crimson Tide, make sure to look for LB #10 Henry To’oto’o. The 6’2, 228lb senior was a tackling machine last season, racking up 111 total stops and four sacks while playing next to Christian Harris in the middle of the Bama defensive front seven. He is an instinctive linebacker, being quick to diagnose the play and run to the football while also being a superb zone coverage defender To’oto’o will be called upon to halt the Longhorn rushing attack this weekend in a hostile environment.

The headliner of the Longhorn offense that will look to gash Bama on the ground is RB #5 Bijan Robinson. The 6’0, 220lb junior is the NFL’s next feature back, having the speed, size, and explosiveness to carry the load in the running game whether it be in-between the tackles or on the edges. He’s coming off a season where he racked up over 1,400 all-purpose yards, scoring 11 times on the ground while also catching 26 passes for 295 yards and an additional four scores through the air. If the Longhorns have any shot at an upset, Robinson will have to have a day against a vaunted Crimson Tide defense.

The Pitt Panthers invite the Tennessee Vols to Acrisure Stadium Saturday afternoon in a clash of two top 25 ranked teams. The Panthers boast a formidable defensive front led by DL #8 Calijah Kancey. Kancey lacked prototypical size you look for in an interior DL, standing at 6’0, 280lb. However, the junior possesses impressive twitch and explosiveness, being a game wreaker in the middle of the defense thanks to his ability to penetrate gaps and quickly shed blocks. He posted seven sacks last season and may be set up get his first of 2022 against a suspect Vols OL.

For Tennessee, the passing attack will be centered around WR #4 Cedric Tillman. Many thought the 6’3, 215lb senior would leave for the draft last year, but he opted to return to improve his draft stock and play one more season before going pro. Tillman has the size you look for in an outside WR prospect at the next level and is the go-to target in the Volunteer passing game having caught 64 passes for 1,081 yards and 12 TDs last season. If Tennessee wants to pull off a road upset, look for Tillman to get involved early and often in this one.

It’s hate week in my home state of Iowa as the Cyclones travel to Iowa City to battle the Hawkeyes for the Cy-Hawk Trophy. Alex Kozora mentioned the name last week on The Terrible Podcast, but LB #31 Jack Campbell is that dude for the Iowa defense. The 6’5, 246lb senior is a tackling machine for the Hawks, having posted 140 total stops last season along with a sack, forced fumble, two fumble recoveries, and two INTs. He is a downhill thumper that will smack you in the run game as well as has the instincts and length to impact the passing game. Look for Campbell to make an impact in this one as Iowa looks to keep the trophy in Iowa City another year.

For the Cyclones, one player that needs to start getting some national recognition is EDGE #9 Will McDonald IV. McDonald comes in undersized at 6’3, 236lb, but is a fiend off the edge as a pass rusher. He has posted 29 sacks and nine forced fumbles coming into 2022 (five last season), having the fluidity and bend around the corner that strikes fear into offensive tackles having to handle his fast ball off the edge. He will have a tough test against the Hawkeye run game, but should he hold his own there wreak havoc in the passing game, look for McDonald’s name to generate more buzz heading into draft season.

The Kentucky Wildcats travel to The Swamp to take on the Florida Gators in a top 25 SEC clash at night. The Wildcats will be counting on star QB #7 Will Levis to lead them to victory against the rival on the road as Levis has become one of the most talked about prospects in this draft class. The physical tools are tantalizing for the 6’3, 232lb senior, having the size, athleticism, and arm strength you love to see in a QB prospect. However, he is still pretty raw from a technical standpoint of the game, having to improve his touch and accuracy to avoid turnovers and lead his offense to points.

While I could go with the QB on the opposite sideline for Florida, my eyes will go to the trenches, specifically the offensive line to watch OG #54 O’Cyrus Torrence. The junior is a hulking human being, standing at 6’5, 347lb and personifies the definition of a road grader upfront. He has been named to the Outland Trophy watch list and is the man the Gators will run behind to attack Kentucky’s stingy defensive front. Should Torrence and the run game have their way in this game, he could boost his stock and start to separate himself as one of the better IOL in this draft class.

The Baylor Bears will travel west to take on the BYU Cougars in one of the top games of the weekend.

The Bears’ defensive front will look to stifle the BYU run game in this one with the help of DL #62 Siaki Ika. The 6’4, 358lb junior plays like an immovable object against the run thanks to his size and strength yet is surprisingly nimble on his feet for tipping the scales over 350lb. Built in a similar mold to Vita Vea of the Buccaneers, Ika came over from LSU when HC David Aranda took the job to become the man in the middle for the much-improved Baylor defense. Ika can be a starting NT Day 1 in the NFL with the pass rush upside to become a foundational piece on a defensive line for a decade should he build off his 2021 performance this season.

#Baylor DT Siaki Ika (6-4, 354, SR) LSU transfer. He’s an athletic and ridiculously strong 0-tech NT that’s very light on his feet for his size. Already an A+ run defender and also shows flashes of having passing down value to melt the pocket. Will receive lots of Vita Vea comps. pic.twitter.com/zg3fJXYoU9

For BYU, you should divert your attention to OT #71 Blake Freeland. The 6’8, 305lb junior has the height and length that you look for at the NFL level. He may need to add additional mass to fill out his long frame to handle NFL power rushers better at the next level, but his has good technique in pass protection as well as good feet and athleticism on in space as a run blocker. He has no issues climbing to the second level or looking for work in the screen game, getting a body on a defender in a hurry. Should he represent himself well against a strong Baylor defensive front, look for Freeland’s draft stock to rise.