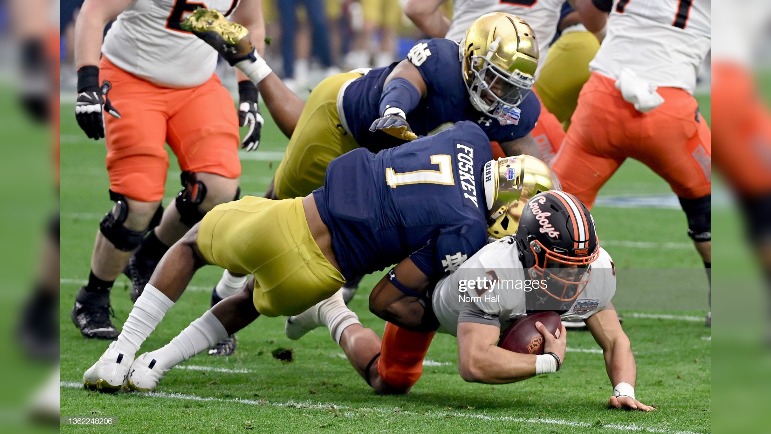 A battle of top tier programs gets underway Saturday afternoon when the Ducks travel to Athens to take on the defending champion Georgia Bulldogs to kick off their respective seasons.

For Oregon, most watching the game will be looking for LB #1 Noah Sewell on the defensive side of the football. Sewell is a rocked up off-ball LB prospect, standing at 6’3, 250lb and plays as an old school, downhill thumper against the run. He is a good athlete in his own right, having the speed and pursuit to chase down ballcarriers, but can struggle at times moving laterally or when tasked with coverage. He will face a big test against the weapons Georgia brings to the table on offense while slowing down the running game.

For the Bulldogs, OT #59 Broderick Jones is a name that may not come up often when discussing Georgia’s star-studded roster but should be a focus for any team looking to improve the offensive line in the near future. The 6’4, 315lb redshirt sophomore is raw in terms of technique and experience, having only four starts under his belt, but oozes athletic talent and upside to become a quality franchise tackle. He is a powerful run blocker that got the best of stud pass rusher Will Anderson from Alabama at times last season and is nimble on his feet for the position. He will have to work on his pass set to claim first round consideration, but Jones has the traits you can’t teach.

The Bearcats square off against the Razorbacks in a Top 25 showdown in Fayetteville Saturday afternoon after both teams enjoyed successful seasons in 2021.

For the Razorbacks, you should direct your eyes to S #1 Jalen Catalon. The 5’10, 201lb redshirt junior only played in six games last season due to a shoulder injury, but the defensive back has proven to be one of the best safeties in the SEC over the past few seasons. He has five INTs and eight PBUs the last two years for the Razorbacks while also playing the role of the enforcer on the backend of the defense. He is a heat-seeking missile that looks to level ballcarriers on contact, being built in a similar mold to former NFL S T.J. Ward.

For the Bearcats, LB #0 Ivan Pace Jr. comes to the team after transferring from Miami of Ohio to join his brother LB #20 Deshawn Pace to form a dynamic duo in the second level of the Cincinnati defense. Ivan packed the stat sheet in the MAC last season, racking up 125 stops, 13 TFLs, and three sacks while Deshawn posted 95 stops along with 9.5 TFLs, and four INTs as more of a versatile defender. After losing the likes of Darrian Beavers and Myjai Sanders to the NFL, look for the Pace brothers to lead the Bearcats defense in 2022.

The Fighting Irish travel to The Shoe in Columbus for a top five showdown with the Ohio State Buckeyes in primetime Saturday night.

For Notre Dame, EDGE #7 Isaiah Foskey is a name you should have circled to watch Foskey is a well-rounded pass rusher who also has nice blend of power and explosiveness at the position. The 6’4, 257lb redshirt junior posted ten sacks and 9.5 TFLs last season and figures to play himself firmly into first round consideration should he build off 2021’s performance in the pass rush department while becoming a more consistent defender against the run.

One player that will be tasked with keeping Foskey at bey for the Buckeyes will be OT #77 Paris Johnson Jr. Johnson is a 6’6, 310lb junior that started 13 games at RG last season but will kick out to LT for the 2022 campaign.  He has the athleticism and footwork in pass protection you like to see in an OT prospect, but still needs to prove he can handle speed off the edge not manning the blindside of QB C.J. Stroud.  Johnson is also a capable run blocker who has shown to displace people at OG, but needs to show more consistent power in this facet of his game to truly elevate himself atop the top tackle prospects in this year’s draft class.

The Seminoles and Tigers face off in the Allstate Louisiana Kickoff in New Orleans, LA on Sunday night.

For Florida State, S #27 Akeem Dent is a name to watch out for in the secondary that brings a fair amount of size (6’1, 196lb) at the position as a player that does is all for the Seminole defense. He posted 44 stops, half a sack, an INT, and four PBUs last season while being a physical defender that set the tone against the run. Should Dent produce more splash plays this season, he could be a name that rises this fall as a draft prospect that profiles well to the NFL game.

For the Tigers, EDGE #18 BJ Ojulari is the name to watch on the LSU defense. The 6’3, 245lb junior is the younger brother of Giants OLB Azeez Ojulari and is following in his footsteps as a capable pass rusher, having logged seven sacks and 12 TFLs last season. He has been given the honor of wearing the famous #18 jersey for the Tigers and will look to take his game to another level as a talented pass rusher that needed to add more strength to his game as a rusher as well as a run defender to become a more well-round edge defender for the league. Should he have a big night against an FSU OL that has struggled in the past, look for Ojulari’s stock to climb as a first-round hopeful.