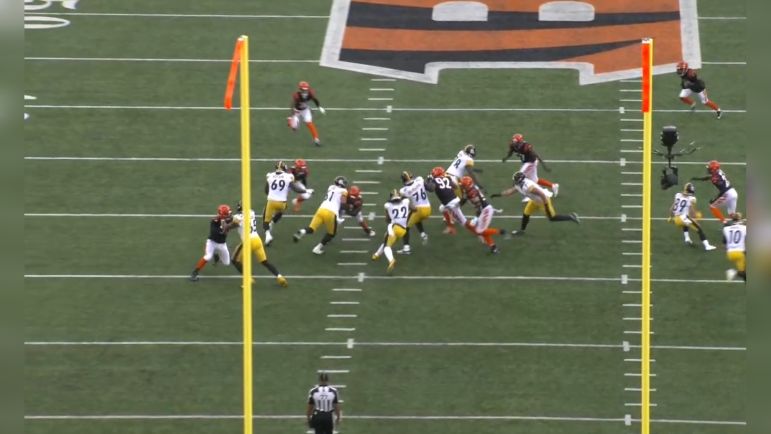 The Pittsburgh Steelers played its first game without Ben Roethlisberger on its roster since 2003. He’s no longer Big Ben, Steelers’ quarterback. He’s just Ben, a fan watching the game from home. And like the rest of us, he offered his thoughts on what the Steelers did well and where they can improve going forward.

Roethlisberger talked about the state of the Steelers’ offense on his most recent episode of Footbahlin, hoping to see the run game improve beginning Sunday afternoon against the New England Patriots.

“I don’t think you ever want your wide receiver to be your leading rusher,” Roethlisberger said on the podcast. “I think Chase was the leading rusher. I know he had a lot of touches on some of those reverses and things like that…I think you’d like to see what [Najee Harris] can do. Obviously it’s not just Naj. Line has to create openings. Is the defense coming down to stop it?”

Claypool led the Steelers in rushing, carrying the ball six times for 36 yards, easily bettering what he did as a receiver (4 catches, 18 yards). As has been the theme, Pittsburgh’s run game struggled, averaging just 3.4 yards per carry. Limited by injury during the summer, Harris struggled, running for just 23 yards on ten carries while combined, Steelers’ backs posted a 13 for 37 line, well under three yards per carry. Wide receivers will have a more active role in the offense this year but as Roethlisberger said, they can’t be the team’s leading rushers. Jet runs can be effective but as Sunday showed, receivers don’t have the same vision as running backs and they left yards on the table, not to mention the negative aspect of the defense blowing up a horizontal run.

While Pittsburgh found a way to win the opener, to sustain that success going forward they’ll have to run the ball more effectively than they have in 2020, 2021, and Week One. Roethlisberger said he believes Pittsburgh will commit to the run game this weekend against the Pats.

A win is a win but Pittsburgh’s model of creating five turnovers and seven sacks on a weekly basis isn’t something that can be expected every week. The run game must be better to put them team in better third-down situations, the offense going an ugly 4/15 in the opener. If those things continue, the Steelers’ Week One win will feel more like a fluke than a sign.