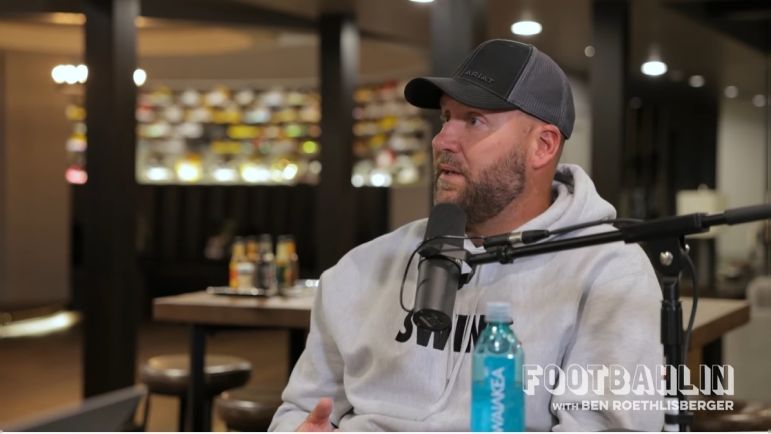 Ben Roethlisberger watched his first meaningful Pittsburgh Steelers game on Sunday since retiring as the team’s quarterback during the offseason. Roethlisberger, who served as the team’s starter for the majority of the 2004 season through 2021, said that at first, he didn’t miss being out on the field.

“Watching the game, I got a bunch of texts from some really great friends, like ‘hey, how you doing,’ just checking to make sure I’m not like depressed I’m not there. And honestly, I was great, I was with my son and the rest of the family was there. I had no urge to be back out there,” Roethlisberger said via episode 3 of his Footbahlin’ podcast.

After the game got tight and Pittsburgh had the ball late in the game, Roethlisberger said that he felt a little bit differently.

“I’d be lying if I didn’t say that in overtime or the fourth quarter when you have the ball, there’s probably something like, oh man I would love to have this opportunity right now. You live for that moment when the ball is in your hand and you have a chance to go win the game so that part I definitely got a little juice going.”

Roethlisberger is no stranger to leading fourth-quarter comebacks, as he led the third-most in NFL history with 41. That total trails just Tom Brady and Peyton Manning in NFL history, and towards the end of his career, that clutch gene was what helped the Steelers win games. The last few seasons, no matter how poorly Roethlisberger had played, it seemed as if he always found a way to give them a chance during his final drive late in the fourth quarter.

Obviously, a lot of that is a testament to the defense for keeping the score close enough for Roethlisberger to have the opportunity to come back, but for all the faults in his game late in his career, you can’t argue that he wasn’t clutch.

Ultimately, even if Roethlisberger misses the game, there’s virtually no chance he returns to the gridiron. He’s 40 years old and his best football is pretty far behind him. Even if he did want to return, which is unlikely, I don’t think there’d be a team willing to bring him aboard. I think every athlete has those moments where they miss having a chance to help their team win at a crucial juncture, and Ben is no different. He remarked that he felt a lot better waking up on Monday morning than he would’ve if he was still playing, and that’s certainly the truth behind this Pittsburgh offensive line (although they did only give up one sack on Sunday).

Regardless, it’s interesting to see Roethlisberger talk about his feelings watching the first game in 18 years where he wasn’t around the team in some capacity.