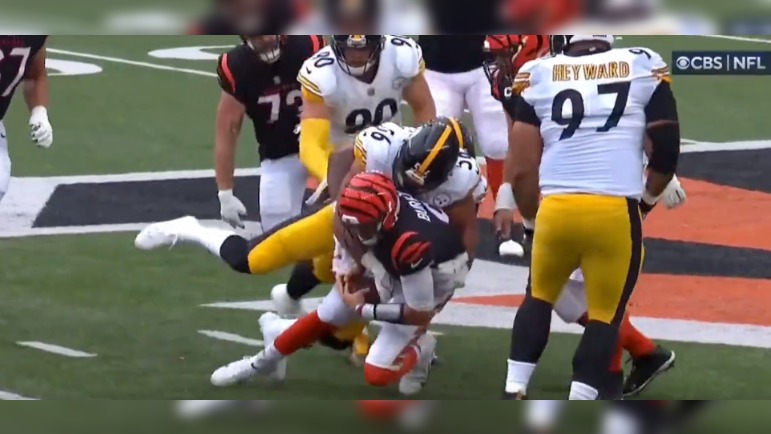 As the Pittsburgh Steelers prepare to face the New York Jets in Week 4 after a long rest, they will once again do so without star linebacker and Defensive Player of the Year T.J. Watt. After his Week 1 pec injury against the Cincinnati Bengals, the team’s pass rush noticeably declined. When asked about said decline, second-year Jets Head Coach Robert Saleh did not undermine the Steelers’ front for playing without their star.

“It’s going to be a challenge,” Saleh said in his Wednesday press conference when asked about the Steelers’ pass rush. “It’s going to be a challenge for the protection system to hold up. They still got a lot of good ones. [Cameron] Heyward is in there, [Larry] Ogunjobi. They push the pocket. They play very hard. They’re relentless in their pursuit for the quarterback.”

Since 2017, almost no team in the NFL outside of Pittsburgh earned the sack title, as the Steelers either led or co-led the league in sacks for the past five seasons. While this is a group effort, it’s hard to ignore the elephant in the room in Watt and his role in this. Having tied and almost broken the NFL record for sacks in a season in 2021, the team’s pass rush has and will miss Watt dearly in his time off.

However, the team still has more than enough talent to cause problems for Jets’ quarterback Zach Wilson and company. That is, linebacker Alex Highsmith leads the league in sacks, and is following a promising career trajectory while replacing Watt. Not to mention, All-Pro defensive end Cameron Heyward is not going anywhere, nor is the team’s depth at the defensive line.

“They do a really good job with their coverage system,” Saleh continued. “They give the d-line a chance to go get the quarterback. It’s a very experienced team. They’ve played together for a very, very long time. They’re very efficient in what they do from a down-in, down-out basis. So, it’s going to be a great challenge for everyone, not just the quarterback.”

The Jets’ offensive line is depleted with starting tackle George Fant being ruled out, and ranks 28th in the NFL according to Pro Football Focus. With Zach Wilson making his season debut, it’s imperative that the Steelers’ rush make an impact throughout the game.

A key matchup to watch is Heyward lining up against Jets left guard Laken Tomlinson, who has struggled thus far in 2022. On the edge, the aforementioned Fant will be replaced by a relatively inexperienced Conor McDermott, a matchup that significantly favors Highsmith on paper.

As Saleh mentions, the Steelers have indeed built a foundation on having a consistent pass rush, as evident by their leading the league in sacks in the past five seasons. This is being put to the test with the Watt injury, as the pass rush is expectedly declining and the team has not won a game without Watt since drafting him in 2017. However, the defensive front must put together a good performance in their favorable matchup against the Jets’ offensive line Sunday.