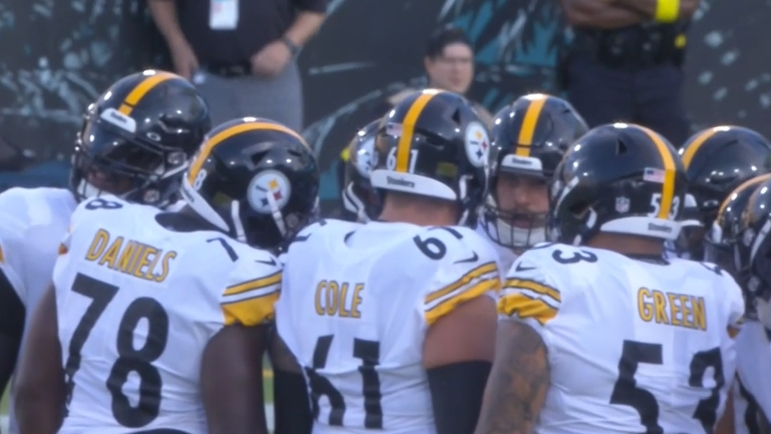 Whether it’s entirely fair or not, much of the success or failure of the 2022 version of the Pittsburgh Steelers rides on the new-look offensive line that former GM Kevin Colbert assembled for head coach Mike Tomlin and new offensive line coach Pat Meyer.

So far, the returns on that new look up front with the additions of center Mason Cole, right guard James Daniels and the re-signing of Chukwuma Okorafor haven’t been as good as the Steelers’ front office and coaching staff were hoping for. Patience is required when it comes to rebuilding an offensive line, but based on performances in the preseason and throughout training camp, it could be a bit of a mess for the black and gold in 2022.

Pass protection remains an issue, though the Steelers brought in some mobility in the offseason with the likes of veteran Mitch Trubisky and rookie first-round pick Kenny Pickett to try and help offset some of those issues. Run blocking will be the biggest thing though, especially with star second-year running back Najee Harris in the backfield.

Do your best to ignore Kendrick Green for a moment but this is an effective "hop step" by center Mason Cole against the bull rush. OL Coach Pat Meyer says guys usually need two hop steps to stall bull out. Cole does it here. Nice job. #Steelers pic.twitter.com/iQn9RktcVz

Despite struggling to open up lanes on the ground last season, the Steelers added two solid run blockers in Cole and Daniels in hopes of creating some lanes for Harris, creating more balance for the Steelers’ offense in 2022. Cole, who has emerged as a bit of a leader up front in the trenches for the Steelers, wants all the pressure put on the Steelers offensive line.

“Put it on us,” Cole said, according to The Athletic’s Mark Kaboly. “In this league, you have to establish the run game to be successful. There are very few teams that can sit there and throw the ball 45 to 50 times and be successful. We have athletes all across the field to play however we want, but with 22 back there, we have to run and we have to protect.”

Not to be overlooked is the signing of Mason Cole. I broke down his film for @Steelersdepot this morning. A steady, versatile iOL that I like at center much more than guard. #Steelers https://t.co/y0oxmtO9k6 pic.twitter.com/n3VM9A4L09

While Cole is open to, and wants all the pressure on the guys up front, it’s going to be there no matter what. As Cole states, to be a successful offense, you have to be able to run the football at a consistent level, even if it’s not a run-heavy scheme. The Steelers certainly tried to to do that last season, but much of Harris’ success on the ground came due to volume of work, not quality of rushing attempts.

That has to change in 2022, especially with a new quarterback under center in Trubisky. With the Steelers leaning heavily on the defense this season, much like 2019, the Steelers need a balanced offense overall to at least have some semblance of success on that side of the football under second-year offensive coordinator Matt Canada.

That starts on the ground with Cole, Daniels and the rest of the offensive line creating rushing lanes for Harris.  Being able to establish a rushing attack will take some pressure off of Trubisky and the star-studded pass catchers, giving the Steelers some balance offensively as they attempt to get back to the playoffs in 2022.

It’ll be on the big guys up front.