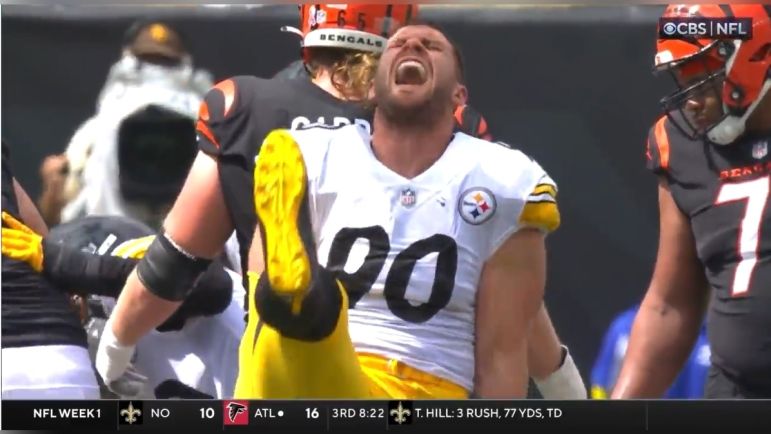 What an intense game. Hours later and still not relaxed. The Steelers played with a lot of heart. The victory is sweet but very costly. The next 48 hours will likely bear news on the seriousness of injuries to T.J. Watt and Najee Harris. Others got hurt but these the most serious looking.

I watched this game from home. My wife Sue following along in another room would pace in at key intervals. We shared moments of happiness and others of gloom. But the Steelers managed to bring win this game to bring us to cheer.

The Steelers offense showed some trickery and misdirection at times.

But as the game wore on just looked predictable. Especially in the red zone. But Najee squeaked in for a touchdown on the second trip into the red zone to give a 17-3 lead.

The Steelers punted on eight of 14 possessions plus had a kneel down at end of first half. Most egregious was the offense unable to close out regulation holding a 20-14 lead with 1:51 to play. The three and out used up only 15 seconds before Harvin punted. Najee Harris lost on the first play of the drive which gave the Bengals a free clock stoppage.

Pittsburgh went three and out to start the overtime period. The Steelers given life as Evan McPherson missed what should be a 29 yard chip shot. From the 20, Diontae Johnson made a stellar catch at the sideline. Initially, officials ruled an incomplete pass. But the replay official reversed the call tat put the ball at the 45.

Diontae Johnson with a catch of the year nominee in Week 1 🤯
pic.twitter.com/jdHGpQreOH

Claypool ran around right end for 12 yards and into Bengals territory. Claypool picked up six more yards on a reception. But Chris Boswell doinked the ball off the post. It was loud.

The Bengals were at the 38 on third down. Arthur Maulet strip sacked Burrow and the Bengals recovered at the 50. The NFL has a rule that under two minutes only the player who fumbled the ball can advance forward which worked in the Steelers favor.

On third and one at the 29, Trubisky hit Pat Freiermuth for 26 yards on a free play. The offside penalty stopped the clock for the Steelers. The Steelers got one more first down on the Trubisky to Freiermuth connection. With five seconds, Chris Boswell hit the 53 yard game winner. The offense mostly anemic during the game did just enough to help win the game.

The Steelers defense played superbly. They forced five turnovers plus made a goal line stand putting the team in position to win in regulation by taking the ball on downs.

Minkah Fitzpatrick started it off with a pick-six on the Bengals. Later he broke up a pass in the end zone. He led the team with 14 total tackles.

Another look at Highsmith to Heyward #Steelers pic.twitter.com/shlAKB9TIr

Arthur Maulet stripped Burrow of the ball that forced a Bengals punt in overtime. The Steelers would finally put the game away on the ensuing drive.

T.J. Watt intercepted a ball, knocked another ball down and tackled Bengals for losses three times.

Cam Sutton had a pick-six taken away by a tacky pass interference call. He later defensed several passes including one in the end zone on fourth down that out the Steelers in position to win in regulation. Plus, he intercepted another pass.

I’m sure to miss other big defensive performances. But there were so many. But it came with a cost. Most serious is T.J. Watt’s injury with 22 seconds left in regulation. Levi Wallace hurt his ankle which forced Sutton to play outside. Cam Heyward left early but hoping he was just gassed.

Had the offense been playing even average ball, this game would not have been close.

Chris Boswell kicked off five times. All five were touchbacks.

Evan McPherson kicked touchbacks on five of six kickoffs. At the end of regulation, he kicked a low kick that Olszewski muffed, recovered, but gained just one yard to the 21 to end the fourth quarter.

Really no edge gained by either team.

Pressley Harvin punted eight times averaging 48.5 yards. The Bengals returned five, but the coverage units limited them to just 6.2 yards per punt. Miles Boykin and Benny Snell each made two tackles. Two of Harvin’s punts from deep in his own territory only travelled 41 and 40 yards, respectively. The second was returned ten yards giving the Bengals starting position at their own 46. The Bengals scored a touchdown off the favorable field position. Harvin did hit a 53 yard beauty that went out of bounds at the nine but that was the only boot that put the Bengals behind their 20. Long snapper penalized for holding on the sixth punt that was a touchback.

Kevin Huber had to wait to the second half to punt. Mostly due to Pittsburgh’s defense taking the ball away from Cincinnati. Gunner Olszewski fair caught the first at the nine. Then Gunner returned a 50 yard Huber punt 20 yards into Bengals territory at the 45. The Steelers scored a field goal off the field position. In overtime he kicked a 50 yard touchback.

While Harvin had a decent day, I give the edge to Huber. The two short punts with a wide open field gave the Bengal’s favorable field position resulting in a touchdown. Looking for Harvin to flip the field and a 40 yard punt from behind his own 20 does not cut it.

Chris Boswell kicked both extra points and three of four field goal attempts. His 55 yard overtime attempt bounded off the post with an audible thud. But when give another chance he redeemed himself with a 53 yard game winner.

Evan McPherson has a very strong leg. His 59 yard first quarter kick looked effortless. But long snapper Clark Harris got hurt and the timing with reserve snapper gave the Steelers an edge. Minkah Fitzpatrick blocked an extra point attempt. Then McPherson missed a 29 yard chip shot in overtime to keep Pittsburgh in the game.

Chris Boswell Knew Game-Winning Field Goal Would Be Good: ‘I Knew As Soon As I Hit It’ – https://t.co/7LFm8OhqzA

The game winner is the edge.

The Steelers accomplished four of five keys to victory.

Thank you, Ross McCorkle, for keeping us up to date on the game’s first and second half Live Update and Discussion Threads. Steelers Depot respondents contributed 1050 first half comments. Respondents added a whopping 2166 second half comments.  Here are the “best comments” of the game:

Alex Kozora led the way with his greeting, “Thanks for being here everyone! Enjoy the game.” I don’t think he had an inkling of how intense this game would be. If you like intensity then you certainly enjoyed this game.

The GrumpyHighlander not happy with the offense. “Dumb play calls. Move the qb…give him option. That’s why you got him for crying out loud.” Many agreed. AZ – #60 summed it up early in the game: “Wow 3 turnovers on only 1 TD scored by the offense is concerning.”

BigDickSwangin captured our thoughts near the end of the half. “Up 11 on the road, against afc champ division rival with a new QB…. I’ll take it.”

The offense just did not give fans confidence. SeventhHeavan observed that the “Only way we MIGHT win this is with another pick 6.” RicR added “It’s amazing how in today’s NFL teams can move the ball so easily. Yet steelers never have a receiver open.”

“Help us Defense, you’re our only hope,” BigDickSwangin pleaded. Arthur Maulet may have heard him. His strip sack forced Bengals to punt, and Boswell shut out the lights in Cincinnati.

The Steelers eked out a costly win. A dominant display by the Steelers defense. But injuries to several players. The biggest is a possible pectoral injury to TJ Watt suffered with 22 seconds to play in regulation. We will find out over the next 48 hours whether this is season ending. Also, Levi Wallace hurt an ankle and Cam Heyward left late in the game. Robert Spillane also had some type of eye injury – scratched cornea? On offense, the major blow was losing Najee Harris to a foot injury. Tuesday’s injury report will tell the tale.

The defense played lights out. The special team solid aside from a missed field goal and a couple mediocre punts. The offense did just enough inn overtime to allow Boswell to kick the game winner. Mitch Trubisky must play better.

Pittsburgh entertains New England at home. I depart for Africa Tuesday so will miss seeing it in person. Ken Sterner and Moose Dodrill will be in my seats. Hoping they cheer the Steelers on to another victory. Time for another gutsy defensive performance and improved offensive play.

I always like to offer a music selection. FlaFan47 inspired this choice. Pittsburgh ekes out a win. All I can say is  More, More, More by Andrea True Connection.