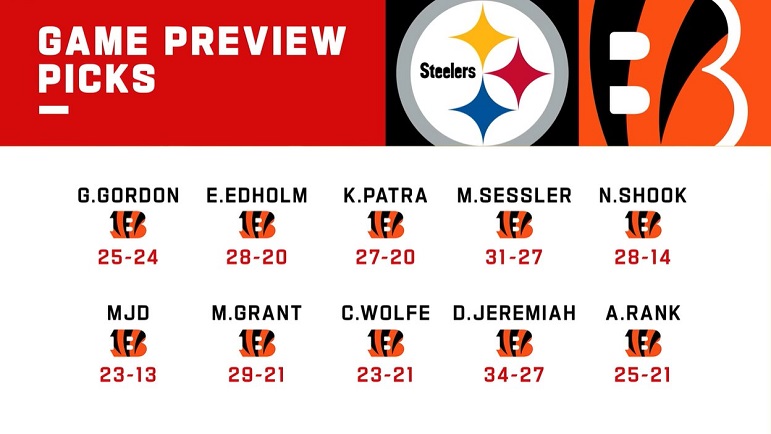 The Pittsburgh Steelers face a tall task in Week 1 when they take on the reigning AFC Champions in the Cincinnati Bengals. Pittsburgh has a new quarterback to go along with new faces along the offensive line and the wide receiver room, while the Bengals retain a lot of the same core that took them to the Super Bowl while revamping the offense line with additions of La’el Collins, Alex Cappa and Ted Karras. The NFL Network team of writers doesn’t think too highly of Pittsburgh’s chances against Cincinnati, as in their game preview posted to YouTube, all ten picked the Bengals to win.

For the most part, the expectation among NFL Network is that the game will be close. Nick Shook’s 28-14 prediction has the highest margin of victory at 14 points. Grant Gordon had the lowest, as he predicted a 25-24 Cincinnati victory. As we all know, the last time Pittsburgh visited Cincinnati, the game was not remotely close as the Bengals trounced Pittsburgh 41-10 to complete the season sweep.

Last year, when the Steelers played the Buffalo Bills in Week 1, all ten NFL Network writers also predicted a Bills victory in their game preview last season. Pittsburgh was able to prove them wrong, as defense and special teams play (a key punt block by Miles Killebrew was returned by Ulysees Gilbert III for a Steelers touchdown) helped Pittsburgh upset Buffalo 23-16.

For the Steelers to beat Cincinnati this year, the defense is going to have to be similarly productive and they’re going to need to get solid play out of their offensive line. Cincinnati’s defensive line features Trey Hendrickson and Sam Hubbard, who combined for 21.5 sacks last year. On the inside, Cincinnati has B.J. Hill and D.J. Reader who were both really solid contributors for them last season.

To win the game, Pittsburgh is going to need to give Mitch Trubisky (or in the unlikely event he’s named the starter, Kenny Pickett) time to throw and let receivers get open. If the line looks the way it did for most of the preseason, Pittsburgh might be in trouble.

From a betting standpoint, the NFL Network team seems to believe the Bengals will cover the current spread of -6.5 (per DraftKings), as six of the predictions have the Bengals winning by 7+ points.

We have just over a week until the Steelers kick off their regular season. Let’s see if the Steelers can once again prove the analysts wrong and walk away with a Week 1 victory over an AFC favorite.