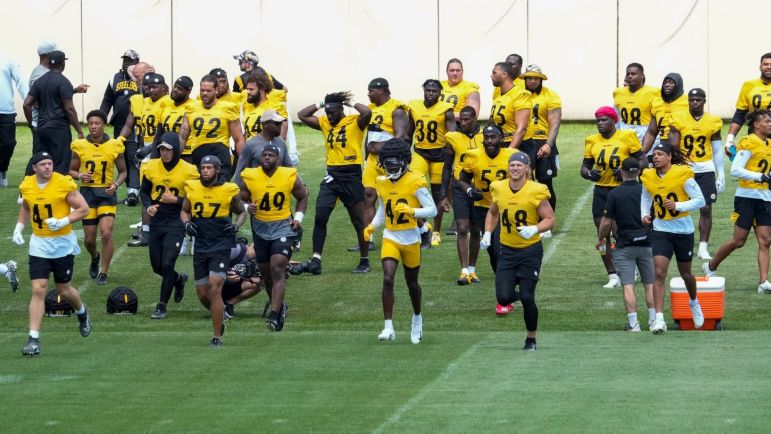 NFL Network analytics expert Cynthia Frelund released her 2022 NFL win total projections on Monday, and the Pittsburgh Steelers came in at below .500 with an average of 7.8 wins. Frelund developed a model and then simulated each regular season game over 1,000,000 times in order to come up with the numbers.

For Pittsburgh, the 7.8 projection would mean the most likely outcome for the team is an 8-9. Frelund wrote that offensive line play is a major factor in the total.

“Offensive line performance is a big factor in my model because it plays such a significant role in earning wins. In fact, it’s the main factor in making the mean win total 7.8 here. The ceiling of 9.7 wins is driven primarily by the defense. T.J. Watt projects to earn the second-most sacks in the league (14.5), but the second-place projection in that category certainly doesn’t mean he won’t be a contender for a second straight Defensive Player of the Year award. The entire Pittsburgh front should combine to create incredible pressure.”

Pittsburgh’s offensive line is certainly going to play a major factor in how they perform this year. At this point, it’s clear the team has the talent on defense and at their offensive skill positions in order to be a contender in the AFC. The offensive line is one of the worst in the NFL though, and with a new quarterback, if he isn’t able to stay upright and have time to make the proper reads, the Steelers could lose a few games they might otherwise win.

Frelund also had a ceiling and a floor for the Steelers, with the ceiling being 9.7 wins (which would equate to a 10-7 season) and the floor being 6.2 wins (which comes out to a 6-11 season). I think the range of 7-10 wins is realistic to expect for the Steelers this year, although I think either eight or nine is the most realistic outcome. The line is bad enough that less than that really wouldn’t surprise me, though.

The 7.8 win projection put the Steelers at No. 12 in the AFC and last in the AFC North. There was a big gap between Pittsburgh at 7.8 and the projected No. 13 team in the Jacksonville Jaguars, who are projected to have 6.2 wins in Frelund’s model. As far as the AFC North, the model had the Baltimore Ravens as the projected champions with 9.8 wins, while the Cincinnati Bengals got a wild card berth with 9.4 wins. The Browns slotted in one spot ahead of the Steelers with 8.4 projected wins.

The first few weeks of Pittsburgh’s season will be telling as to how far this team can go. Their hardest game through the first four weeks is in Week 1 against the reigning AFC Champion Bengals, which on paper is definitely a tough matchup for Pittsburgh.

Weeks 2-4 are all winnable games, as Pittsburgh takes on the New England Patriots at home in Week 2 and the New York Jets at home in Week 4, with a Thursday Night road contest against the Deshaun Watson-less Browns sandwiched between in Week 3.

With Watson being out and New England’s offense looking subpar with the loss of Josh McDaniels, those two games plus the Jets game should lean in Pittsburgh’s favor. If the offensive line struggles and the offense isn’t able to get going though, there’s only so much Pittsburgh’s defense will be able to do. Let’s hope the line is improved over what we saw in the preseason and the Steelers are able to get off to a solid start in 2022.