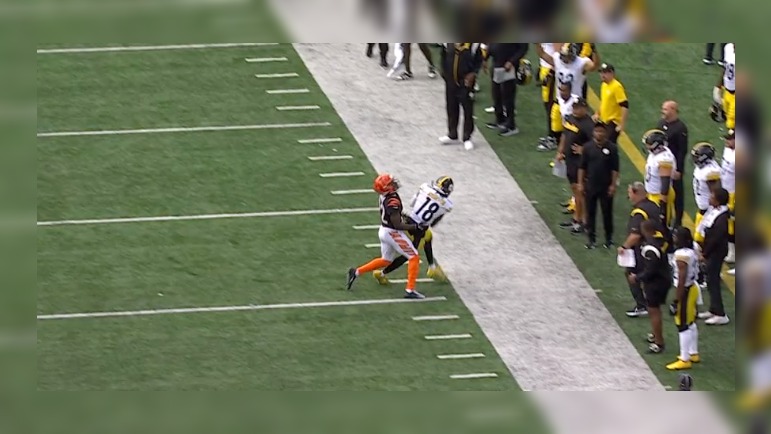 Najee Harris spoke with Adam Schein on Mad Dog Sports Radio Tuesday morning following Pittsburgh’s 23-20 overtime victory over the Cincinnati Bengals and spoke about the current state of the team regarding all the injuries that occurred during the contest. Harris told Schein that he intends to play against the Patriots this coming Sunday but refused to speculate about T.J. Watt’s injury.

Schein went on to ask Harris about several of his teammates including WR Diontae Johnson who made an impressive catch along the sideline against the Bengals Sunday afternoon, elevating up into the air to snag a pass from Mitch Trubisky with one hand while managing to come down in-bounds while being pushed out by CB Chidobe Awuzie.

“Diontae is a playmaker, too,” Harris said to Schein. “Like I said, we got a lot of playmakers on the edge, and we need to get all of them the ball in space to create opportunities, especially one-on-ones opportunities. There was one-on-one opportunity with Diontae, and we’re all banking that he’s going to win half the one-on-ones that goes up to him on the balls that go up to him.”

Johnson is often regarded as more of a short and intermediate target in the passing game, winning quickly off the LOS thanks to his crisp route running and ability to generate separation against defensive backs. However, Johnson has shown that he can win down the field as well on the outside as a deep threat while also being able to win contested catches in tight coverage thanks to impressive body control and spatial awareness.

While Johnson isn’t often known for making catches of that difficulty by the national media or your average football fan, Harris told Schein that his acrobatic catch wasn’t anything knew from what he has seen his teammate do in the past.

“I wasn’t too surprised,” Harris continued on Diontae’s catch. “But, you know, the outside world, of course they’ll be. But just me being here and seeing him make those plays consistently, that’s just something that I’m just knowing that he will do.”

If they rule that a catch, Diontae Johnson just made the catch of the year. I don't care if it's Week One. Write it in pen. #Steelers

Johnson finished the day with seven receptions on 12 targets for 55 yards. It was more of the short area dink and dunk passing offense with Trubisky for most of the game outside of a couple throws down field to TE Pat Freiermuth and Johnson on his catch of the day. Still, Johnson remains the unquestioned #1 target in the Pittsburgh passing game and will look to take a step forward in terms of production against the Patriots this coming Sunday.