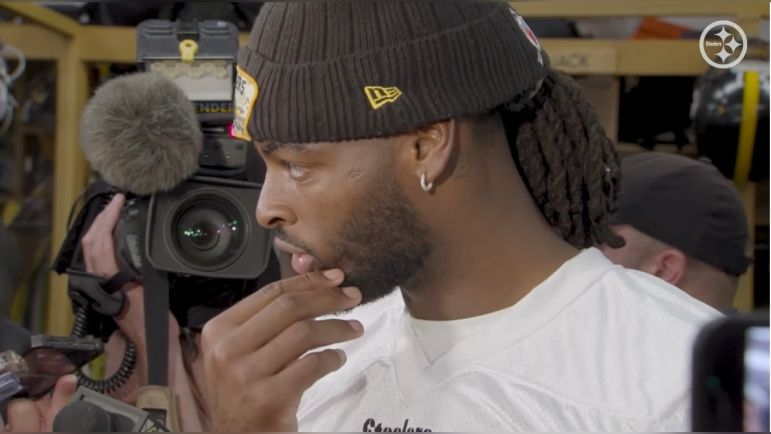 This years Cinderella story for the Pittsburgh Steelers is arguably Jaylen Warren, an undrafted free agent running back out of Oklahoma State that beat the odds to make the team over several former draft picks. The team’s Week 1 outing against the Cincinnati Bengals matchup saw Warren get three carries in the absence of starting running back Najee Harris, as he is presumably the team’s backup. The team’s 2021 first-round pick and workhorse back out of Alabama commented on Warren’s preparation and development as well as his potential reduced role.

“I mean I don’t really think there were expectations other than to go out there and execute,” Harris said Wednesday when asked about Warren according to Steelers.com. “He’s a good player, he’s still learning. He came in there, he made a lot of good blocks too. As much guys as we can get on the team that can help provide in any way possible, it’s always welcoming.”

It is a lot to ask of an undrafted rookie to step up in the absence of the starting workhorse back. As Harris stated, Warren indeed went out and executed, a performance that prompted a new and all-time Tomlinism in head coach Mike Tomlin’s postgame interview. Warren also had a few impressive blocks, including one in a receiver hand-off to Chase Claypool that made an impact. While it’s too early to assume that the team will now go out with a one-two punch with Harris and Warren as many teams do, the Steelers’ low-risk investment in Warren appears to have paid off so far.

“He is going to have to (step up). He has no choice,” Harris said when asked whether Warren will be ready in the event that he is unavailable. “But it ain’t gonna be like that, I am okay. He is going to be good. He helped me out a lot too to keep me off the field so I wouldn’t get extra hits. I think last year I played the most snaps in the NFL. Going into the second year, we can’t do that, especially for a running back. It’s too violent, it’s too much. You have to have somebody spell you. That’s good.”

Harris suffered a foot injury during the second half of the team’s Week 1 outing and was limited during today’s practice. He’s maintained the injury isn’t significant and expects to play this Sunday against New England, though it’s unclear if his workload will be reduced.

Despite leading the NFL in snaps by a running back and touches in 2021, the team’s run offense was far from stellar, ranking towards the bottom of the NFL. The concept of a workhorse back appears to be less and less effective as the years go on, and it may be for the best for the Steelers to limit Harris’ touches for his longevity and their run game. The team appeared to embrace this on Week 1, as fullback Derek Watt as well as Warren saw snaps over Harris throughout the game. This may have been due to Harris’ pre-existing injury but it may also indicate that the team plans to split up their touches between running backs, at least more so than in 2021.

In most cases, running backs have a limited life span in the NFL. For the Steelers to capitalize on their first-round investment in Harris, it is indeed crucial to give him breaks when need be. If anything, the team must save him for later in the season. Warren appears to be molding into a reliable candidate for the team to do so, as he is exceeding expectations to say the least.