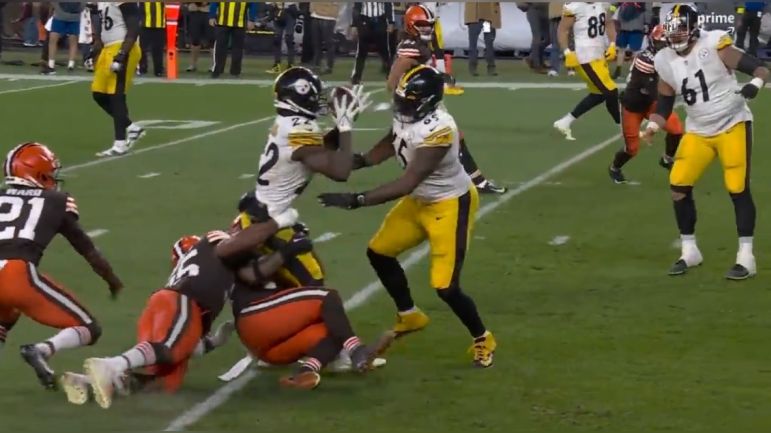 One of the most impressive aspects of Najee Harris’ rookie season was the fact that he was not only able to shoulder such a tremendous workload, but to do so with such security. Not only did he lead the NFL in touches as a rookie with 381, but he also set a lead rookie record for the most touches in a season without fumbling.

While he did put one ball on the ground during the postseason after having suffered an arm injury in the finale that compromised his ability to hold onto the football, postseason statistics do not count toward streaks such as these.

Unfortunately, for those who might care, Harris’ regular season fumble-free streak ended on Thursday on the final play of the game, in about the lamest way possible. Trailing by six, inside their own 10 with nine seconds to go, the Steelers attempted a disastrous lateralapalooza that ultimately resulted in the ball becoming loose and recovered by the Cleveland Browns in the end zone for a touchdown.

Harris was the final Steelers defender to have established possession of the football as he attempted to lateral it presumably to Diontae Johnson, who drifted into the end zone. He couldn’t get much push on the ball as he was getting wrapped up for the tackle, however. Left tackle Dan Moore Jr. and center Mason Cole were the nearest Steelers.

Under the circumstances, however, even though it was clearly a lateral pass and not a simple loss of possession on the football, it gets officially scored as a fumble, and thus marks the first official regular season fumble of Harris’ career—ending his streak to start his career 430 touches without a fumble, the 431st being the ill-fated lateral.

One note from Steelers' final play last night. Not only did the Browns pad the scoreboard with a fumble recovery TD, it goes down as the first fumble of Najee Harris' regular season career. Went 430 touches without fumbling. His lateral is an odd way to end the streak. #Steelers

Now, to state the obvious, all of this is meaningless for any practical purposes. The incident says nothing about his ball security generally nor is in any way predictive of how well he will continue to secure the ball in the future. All it means is that he now has a fumble on the back of his football card.

The record-holder for the most touches to begin a career without fumbling is Phillip Lindsay, who has 703 career touches and has yet to fumble. He’s currently on the Colts’ practice squad. The all-time NFL record for most consecutive touches without fumbling belongs to LaDainian Tomlinson, who recorded 712 consecutive touches between fumbles spanning between the 2006 and 2008 seasons. He recorded zero fumbles on 375 touches in 2007.

As I said, this statistic means nothing to anybody who doesn’t have some interest in quirks like these, but it sure feels like about the stupidest way to end such a streak. Not that Harris should be faulted for attempting to keep the play alive, of course, but it’s like a quarterback being reluctant to throw a Hail Mary at the risk of ending an interception-free streak.