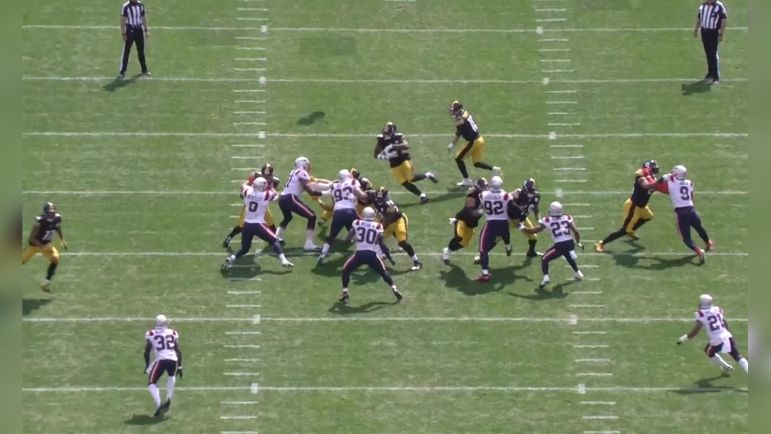 The Pittsburgh Steelers’ ground game has shown some signs of life but hasn’t been as good as the offense wants or needs it to be. Najee Harris is putting that blame on himself and not his front five. Speaking to reporters Friday, Harris says he must do a better job trusting his offensive line. Here’s what he said, per the PPG’s Brian Batko.

“I just need to trust them more, you know?” Harris said. “We’ve got some really good guys. They’ve done a really good job of getting better. We do have a good O-line.”

Steelers RB Najee Harris made a beeline to interviews today in the locker room because it seemed he had something to get off his chest as an offensive captain. He said the OL is playing well and he just needs to trust them more. pic.twitter.com/k3v25VBuu4

Batko notes Harris made it a point to speak with the media. Generally, Harris prefers not to talk to reporters, so evidently, he really wanted to get the message out.

Through three weeks, the Steelers are averaging 4.1 yards per carry while Harris sits at just 3.2, a far cry from even his below-the-line mark of 3.9 a year ago. But Pittsburgh’s offensive line has seen significant improvement, especially as a run-blocking unit. After struggling to open lanes in Week 1, they’ve gotten more of a push over the last two games, as we noted in a recent video breakdown. But Harris hasn’t always capitalized on those opportunities, bouncing a couple of runs too far wide. Running backs miss holes just like receivers drop passes, it happens from time to time, but Harris knows poor numbers become a reflection of the O-line and the story the media might tell.

“I see in social media how bad they talk about the o-line. It’s not. It’s me. Stop focusing on them and focus on me.”

To be fair, most in the media have praised the job the offensive line has done, growing by leaps and bounds after a turbulent summer. Credit to new offensive line coach Pat Meyer for building the group up and young guys like Dan Moore Jr. and Kevin Dotson for developing. The group is more comfortable and appears to be more confident while executing Meyer’s teachings.

If there’s a silver lining, Harris’ numbers have improved game by game. 2.3 yards per carry in the opener, 3.3 in Week 2, and 3.7 in Week 3, there’s been a slow and steady uptick. They’ll have to make quicker progress this weekend against the Jets as both offenses try to establish a better ground game than they have.