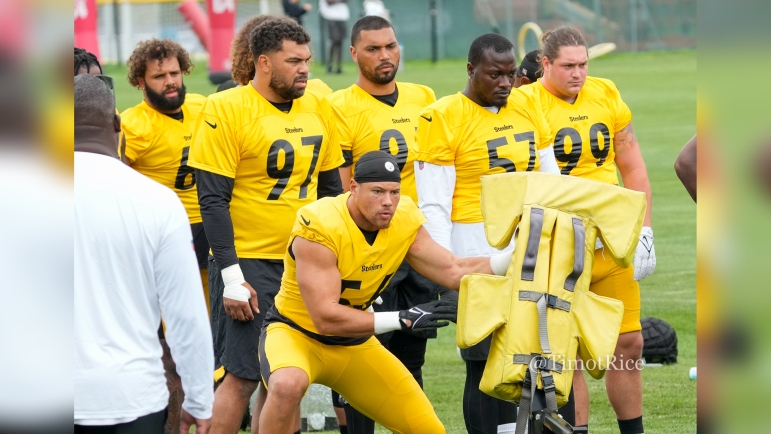 Every Pittsburgh Steelers’ fan knows how much of a leader Cam Heyward is to the Pittsburgh Steelers’ defense. But we don’t always heard direct examples of it. Speaking to reporters Wednesday, Montravius Adams provided a great one. Signed off the New Orleans Saints’ practice squad, Adams was thrown into the fire days after arriving in Pittsburgh, playing 34 snaps against a tough Baltimore Ravens’ run game. He held his own, a testament to his talent but as Adams tells it, he has to thank Cam Heyward for the help.

“I came in here last year, I didn’t really know the plays,” he said via Steelers.com. “I came in Week 10, 11, I can go into a game and not know one play and not have one MA. That speaks from Cam. I can go out there, Cam can tell me every play with me not knowing one.”

“MA,” by the way, means “missed assignment.” Something you’d expect out of a defender who has barely opened up his playbook, let alone function as a starter. Adams helped contain and minimize the Ravens’ run game last year as the Steelers came away with a hard-fought 20-19 victory.

Heyward has continued to play traffic cop this season, working with a rookie in DeMarvin Leal and newcomer in Larry Ogunjobi. In the Week One opener, we showed Heyward playing “traffic cop” and getting the front aligned, especially responding to shifts and motions.

Cam Heyward played the role of traffic cop in Week One. Getting new guys like Larry Ogunjobi and DeMarvin Leal lined up in the right gaps. Coach on the field. #Steelers pic.twitter.com/pjnCmjbkDN

“Having veterans and leadership like that, it’s unmatched,” Adams said.

Heyward has been the constant along a defensive line that’s faced plenty of turnover. Losing Stephon Tuitt, Tyson Alualu’s injury and now regression, all the new and young faces that have come in and out of the door over the last two years. Heyward has been the steadying force, always present, always working, and functioning as a high-end defensive tackle.

But without T.J. Watt the last two games, Heyward has received more attention and his impact has suffered. He’ll have a quality left guard in Laken Tomlinson this week but the Steelers will need Heyward, Adams, and the rest of the Steelers’ front to play their best football to get Pittsburgh back into the win column.