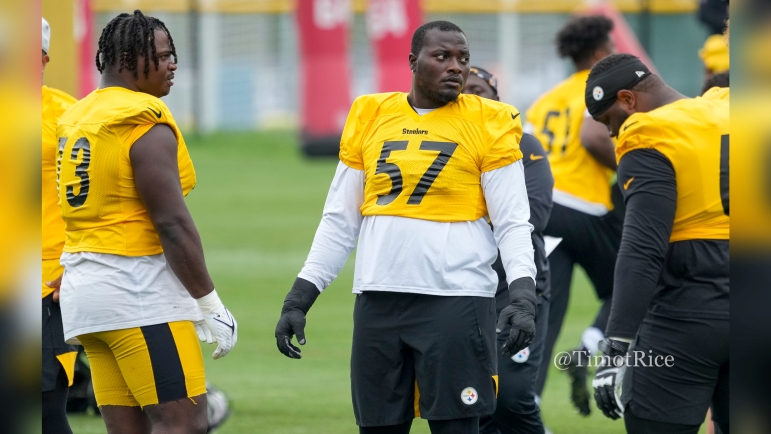 In 2021, the Pittsburgh Steelers were dealt a bad hand for injuries, particularly on the defensive line. As a result, the team allowed the most rushing yards in the NFL, a flaw that the team put in great effort in the offseason to improve upon. As an effort to improve upon this, the Steelers signed nose tackle Montravius Adams from the New Orleans Saints practice squad in late November, and his play earned him a two-year extension with the team. In light of starting nose tackle Tyson Alualu’s struggles, Adams was named the starter. In a Wednesday interview via the team’s YouTube channel, Adams commented on what he can do to get in the flow of things with the increased role as well as what he has improved upon.

“I think the main thing would be communication,” Adams said when asked how he can get in the flow of things with constant rotation as the new starting nose tackle. “Coming in, coming out on the sideline, talking to each guy, talking to the coaches like Coach [Karl] Dunbar. Sitting down, seeing what they’re doing mid game, I think that’d be the main thing.”

Playing on the defensive line in the NFL is not an easy task, and rotation is a difficult aspect. Defensive linemen are often seen running off the field in the NFL during rotations, which opposing quarterbacks often exploit for a free play. As the starter, Adams has an increased responsibility to be wary of this, and it is a good sign that he recognizes that he has to do so.

“Honestly, I would say just trying to slow down, listen, and really pay attention to the details,” Adams continued when asked about what he has improved upon. “It’s a lot of small details that go into it as a D-lineman that definitely makes a lot of players’ games better. With me playing with guys like Cam [Heyward] and Tyson [Alualu], definitely a positive.”

As a late season addition in 2021, Adams had the tall task of learning the playbook and stepping in almost immediately. After a full offseason and a new contract, it was expected that Adams improves upon his play and learning curves. Evident by the team’s confidence in naming him a starter, it certainly appears that he has done do, and will have an opportunity to prove his worth with increased snaps.

Thus far in 2022, the Steelers are playing better against the run with Adams on the field than they are with Alualu, allowing 2.6 yards per run while the former is on the field and 5 yards per run while the latter is, a significant disparity that likely prompted the lineup change. While Alualu’s decline is expected given his being one of the oldest defensive players in the NFL, Adams outperforming him does signify improvement on his part.

A former third-round pick by the Green Bay Packers, Adams career started slow, as he was not resigned after his rookie contract. After landing in Pittsburgh late in 2021, Adams started two games at the nose tackle position. In doing so, he stated that the Steelers have a family feel that he has lacked since college and that he wants to finish his career in Pittsburgh. If the Steelers indeed have the organizational structure that Adams needs to reach his full potential, they may have a hidden gem by in him, and he will have a chance to prove that in his first game starting on Sunday against the New York Jets.