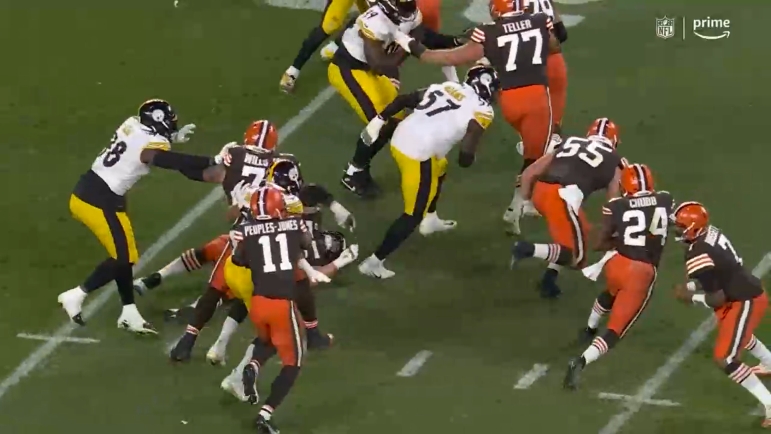 It came as a bit of a surprise Tuesday morning when an updated depth chart for the Pittsburgh Steelers was released, showing nose tackle Montravius Adams elevated into the starting lineup over veteran Tyson Alualu after just three games.

The film hasn’t lied though, as Adams has played better football than Alualu at this point in the season, earning his spot in the Steelers’ base starting lineup at nose guard. In the end, it wasn’t that difficult of a decision for Steelers head coach Mike Tomlin and the defensive coaching staff to elevate Adams into the starting lineup.

Speaking with reporters Tuesday during his weekly media availability, Tomlin stated that it came down to play on the field, period.

“You know, [Adams] has been playing better than Tyson [Alualu], and so, we just thought that was appropriate,” Tomlin said to the media Tuesday which aired live from the team’s YouTube channel.

The Pro Football Focus grades and even charting from Steelers Depot’s own Alex Kozora showed that. Alualu has graded out with a poor 40.9 overall grade from Pro Football Focus three games into the season and has been allowing 5.0 YPC when on the field according to Steelers Depot’s own Alex Kozora. On the other hand, Adams carries a 63.6 overall grade from PFF and has played much better against the run than his teammate, yielding only 2.6 YPC when he is on the field.

That led to the change defensively, especially after the Steelers have struggled to stop the run late in games the last two weeks — both losses.

Adams isn’t viewing himself as the savior of the Steelers defensive front though. Speaking with reporters Wednesday morning from inside the locker room at the UPMC Rooney Sports Complex on the South Side, Adams stated to reporters that he’s just thankful to be recognized for his production on the field, according to video via the Pittsburgh Tribune-Review’s Chris Adamski.

Montravius Adams is happy to be an official “starter” – but he’s no savior! pic.twitter.com/0T4kvx4KIt

“I just feel like a football player. I’m glad to be recognized and I just want to keep putting some great run stuff out there, and try to help in the pass [game],” Adams said to reporters, according to video via Adamski.

Adams has come in and put some good reps on tape so far in the 2022 season. That includes the time he spent in Pittsburgh last season after the Steelers signed him off the New Orleans Saints’ practice squad while in a pinch due to injuries in the trenches.

With the opportunity in Pittsburgh, Adams has taken it and run, working his way into the starting lineup. That’s quiet the story for the former 2017 third-round daft pick that bounced around with the Packers, Saints and Patriots before landing in Pittsburgh and finding a role.

That experience he has and the strong play he’s put on tape created some comfort for Tomlin and the defensive coaching staff to make the change.

“He’s capable of doing the things that we ask him to do. He’s played a lot of football for us,” Tomlin said to reporters Tuesday. “He played a lot and started a lot for us last year. He missed a lot of time during team development and that probably slowed his progress. But since he’s been back from injury, we’ve just seen a real uptick in his consistency and performance.”

The Steelers are hoping that consistency in his performance continues, especially in base situations where he needs to win the point of attack consistently to help the Steelers’ run defense, something Alualu hasn’t quite done this season to this point.