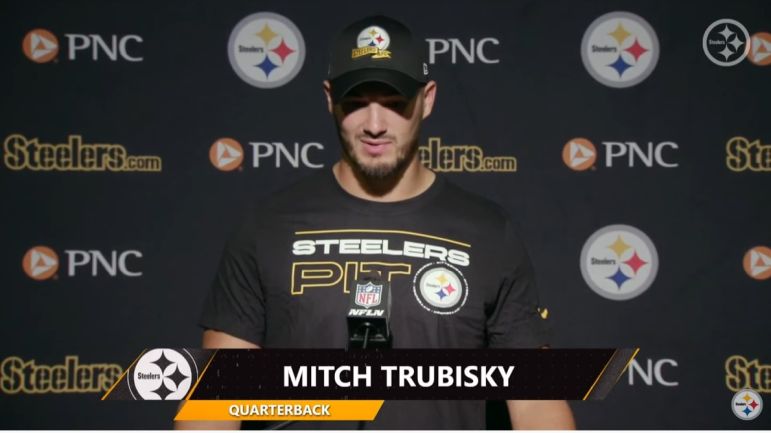 Mitch Trubisky had a heck of an introduction to a Pittsburgh Steeler. Tough. Physical. Chaotic. And ultimately, win by any means necessary.

Speaking to reporters after Sunday’s bonkers 23-20 OT win over the Cincinnati Bengals, Trubisky said he appreciated how the Steelers fought until the end.

“We battled,” he said via the Steelers’ YouTube channel. “We made the plays when we needed to on offense. And the defense absolutely balled today with those turnovers.”

Pittsburgh’s defense forced five turnovers in this game, picking off Joe Burrow four times while forcing another fumble that fell into Cam Heyward’s hands. While the Steelers’ offense sputtered, they took care of the ball, not turning it over once today. That was ultimately the difference and Trubisky led the game-winning drive, setting up Chris Boswell’s 53-yard field goal to avoid the tie.

While a tie felt like a strong possibility late in overtime after the Steelers’ offense continued to punt and the Bengals continued to miss their field goals due to their backup long snapper, Trubisky said his goal was always to come away victorious.

Pittsburgh went eight plays for 45 yards to set up Boswell’s game-winning boot. On third down with 34 seconds left, Trubisky took advantage of a free play, scrambled left, and threw back to the middle to hit TE Pat Freiermuth for a 26-yard gain. That put the Steelers at the Bengals’ 45, a big step to getting into field goal range.

“I had a pretty good idea that it was gonna be a free play. So just scrambled around, found Pat in the middle of the field, he made a heck of a play, not quitting on it, just a little scramble drill.”

He found Freiermuth later in the drive for a gain of ten, all the yards the Steelers needed for Boswell to drill the game-winner.

Freiermuth was one of Trubisky’s favorite targets of the day, catching five passes for 75 yards. Trubisky’s overall numbers look pedestrian, held under 200 yards, a 55% completion rate, and just one short touchdown pass. But in Ben Roethlisberger-like fashion, he carried a never-say-die attitude and rallied Pittsburgh late. Over the last two seasons, the Steelers are a league-best 15-4-1 in one-possession games. They start 2022 off 1-0. Trubisky didn’t quit nor did the group around him, and it’s why Pittsburgh came away victors Sunday.