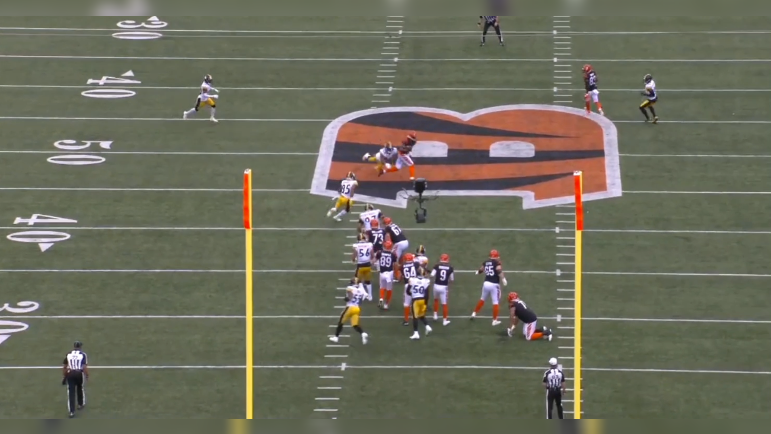 All that live tackling in training camp, coupled with consistent reps in preseason action, paid off in Week 1 for the Pittsburgh Steelers on the road against the Cincinnati Bengals in AFC North football at Paycor Stadium.

Not only did the Steelers win the game and wreak havoc defensively, the black and gold also tackled at a very high, consistent rate on Sunday, turning in the lowest season-opening missed tackles number since I started charting them back in 2016 for Steelers Depot.

In Week 1 against the Bengals, the Steelers missed just six tackles defensively while on the field for 43:43 of game time and more than 100 snaps. That’s an astounding number, one that the Steelers should be exceptionally proud of and excited to build off of.

Let’s dive into the tape and see what we have.

As you can see, it was a rather rough day for fifth-year safety Terrell Edmunds in the season opener, at least from a tackling perspective. After two strong seasons in that department, Edmunds got off to a poor start in the tackling department. I have full faith he’ll bounce back though.

He was around the football a ton on Sunday, and will clean up some of the issues he displayed on Sunday.

Outside of Edmunds, it was a great day for the defense in the tackling department as only Arthur Maulet and Alex Highsmith missed one tackle each in the 23-20 overtime win. Maulet’s came on a blitz against Joe Burrow, while Highsmith missed running back Joe Mixon near the line of scrimmage. More on those later.

Looking at the numbers and watching back through the game and the All-22, it’s hard to find any fault with the Steelers in the tackling department overall. Just one miss led to an explosive play on Sunday. That’s a huge win for the Steelers defense, which clearly came into the season opener with a chip on their shoulders.

Playing in the box a ton again on Sunday for the Steelers, Edmunds was around the football a bunch. He came up a bit small filling downhill against the run on Cincinnati Bengals running back Joe Mixon, leading to a small dustup with fellow safety Minkah Fitzpatrick. Edmunds does a good job staying assignment sound and filling downhill into his gap, staying square to Mixon.

He just doesn’t bring much power behind the attempted tackle, leading to Mixon bowling him over. Fortunately for Edmunds, help is around, allowing the Steelers to get Mixon to the ground quickly after the miss in the box from Edmunds.

One play later after the end of the first quarter, Arthur Maulet recorded his miss on a sack attempt.

The veteran cornerback raced in unimpeded off the edge on a delayed blitz, getting into the throwing lane of Joe Burrow, forcing him to pull the football down. Burrow has great pocket presence and mobility and was able to not only tuck the football, but slide inside Maulet, causing the Steelers defensive back to go sliding right by, missing the sack.

Burrow, sensing it was a lost play, took a knee in front of Steelers linebacker Robert Spillane, giving him the easiest sack of his career. Though it still resulted in a sack for the Steelers, it’s certainly one Maulet wants back.

Finally, in the third quarter Edmunds missed his second tackle of the afternoon, this time on wide receiver Ja’Marr Chase in space on a crossing route.

It’s a tough play to make for Edmunds, who was caught slightly flat-footed at the time of the throw and then takes a tough angle to the point of contact on Chase, but it’s a stop he has to make in the middle of the field, especially with all that green grass around him. The miss by Edmunds allowed Chase to pick up an additional 12 yards before Fitzpatrick was able to upend him, putting a stop to the explosive play.

Offensively, the Steelers had a decent day forcing missed tackles, even on a day in which it was difficult to move the football. Overall, Pittsburgh forced 11 missed tackles on the Bengals, winning the tackle battle with a mark of +5, getting some contributions from unlikely guys like Zach Gentry and Mitch Trubisky in the process.

Despite some struggles to generate much of anything in the run game for second-year star running back Najee Harris, the Steelers’ standout did force three missed tackles on his limited number of touches.

His best one came in the fourth quarter on his best run of the day, ripping off an 11-yard gain on the ground, hitting the cutback on the stretch run. Matched up one-on-one with linebacker Germaine Pratt in space, Harris wins easily, running through the arm tackle to pick up a handful of additional yardage.

Then, in overtime it was Mitch Trubisky and Pat Freiermuth that came up large on the same play for the Steelers.

You all know which play I’m referencing, but lets look at it again.

Drawing defensive end Sam Hubbard offsides, Trubisky does an awesome job playing through the whistle on a play that should have been blown dead for the clear path to the quarterback on the offsides penalty. He’s able to shake Hubbard in the pocket forcing the missed tackle and then finds Freiermuth downfield for the 26-yard gain, on which Freiermuth shakes a tackle at the catch point and picks up an additional five yards, which was huge and goes overlooked on the play.

A few plays later Chris Boswell drilled the game-winning 53-yard field goal and the Steelers were able to go home with a much-needed win.