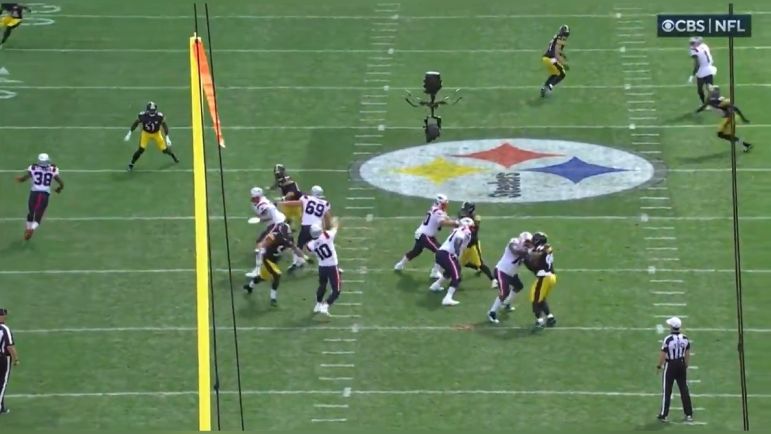 I know the Pittsburgh Steelers suffered a bitter defeat Sunday afternoon. Typically, I pair my film rooms with the outcome of the game. Something positive when they win, something negative when they lose. But as soon as I saw it, I couldn’t wait to break down Minkah Fitzpatrick’s interception. Because oh boy, it wasn’t just an interception. It was one of the best calls and schemes the Steelers have drummed up in a long time. I’m still geeked out about it.

Here’s the skinny of what happened. Steelers played Cover 2, Alex Highsmith rushed in free and pressured Mac Jones who threw a floater Fitzpatrick tracked and picked.

But there was so much more going on than that. To understand what happened, you can’t start in Week Two. You have to go back to Week One. Against the Cincinnati Bengals with a healthy T.J. Watt for most of the game, the Steelers rarely blitzed. Their four man rush got home early and often. But Pittsburgh sent a couple of “safe” pressures, four man blitzes with the NCB or safety blitzing off the edge, and they used it on the game’s final two plays. Remember Arthur Maulet’s overtime sack/fumble on Joe Burrow? That’s the play I’m talking about. Take a look.

Here’s a quick mockup of the key assignments. Rush four, drop seven, playing Cover 2 behind. Nickel corner blitzes with the away side linebacker- dropping into coverage into one of the hook zones. 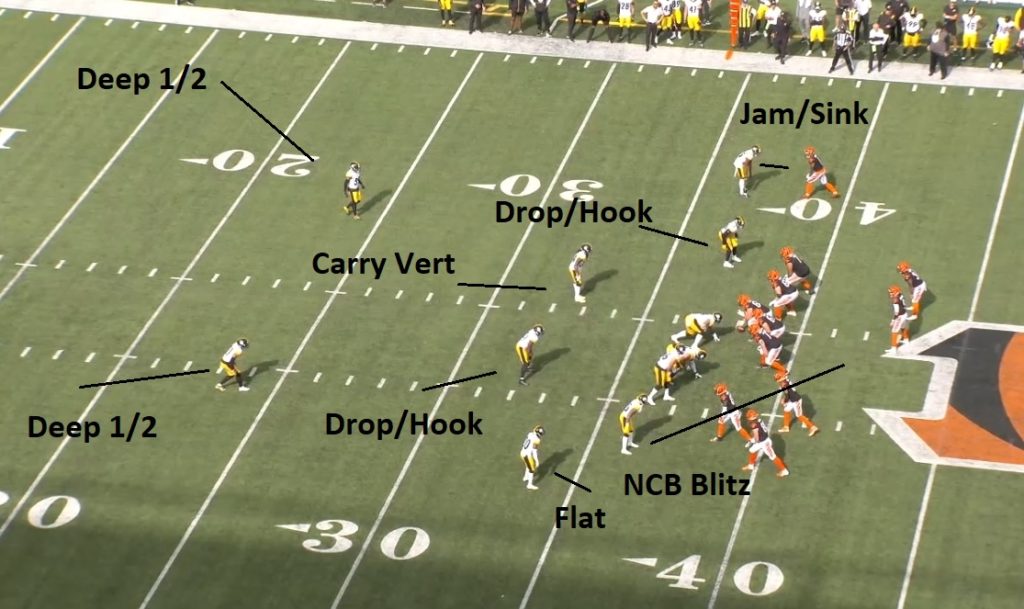 As effective as it was in that game, there was one problem. The Steelers’ defensive alignment tipped the blitz away. Each time they ran it, the Steelers’ DL were overloaded to the blitz side pre-snap. They would slant down with the blitz side OLB wrapping around to contain and replace the backside OLB dropping into coverage. This was the look every single time. 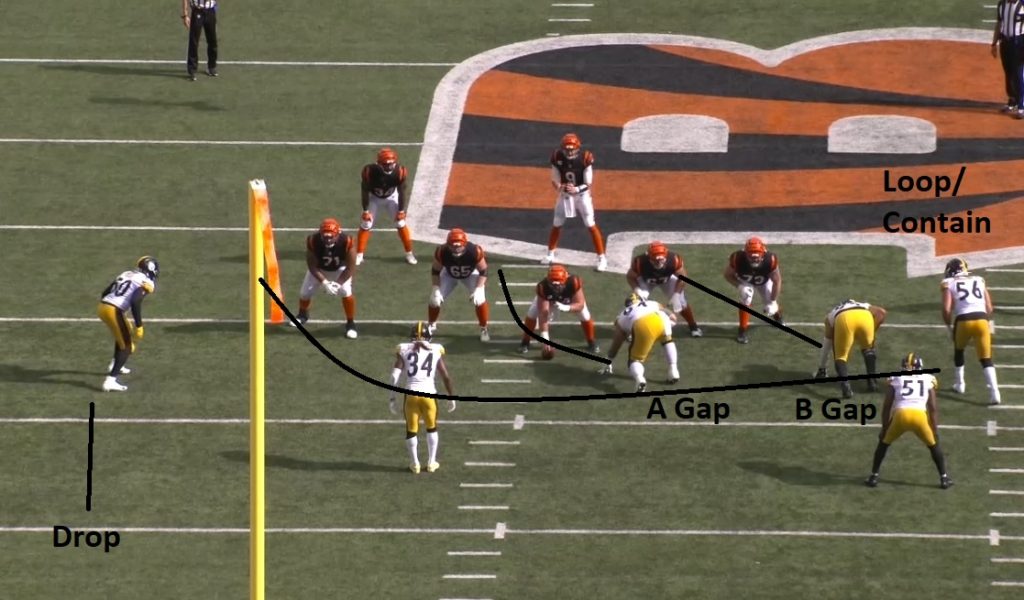 So as good as that blitz was, it wasn’t something the Steelers could run this game. Show that alignment and the Patriots, with coaching savant Bill Belichick, would be ready for it. So how do the Steelers build off their best pressure look in a game where they didn’t have T.J. Watt?

The answer was pretending to play dumb. On the Fitzpatrick INT, the Steelers lined up and acted like they were going to run the same blitz from last week. The defensive linemen overloaded to the blitz side with the nickel cornerback acting like he was going to rush. Which would mean the away side OLB from the blitz, Alex Highsmith, would be dropping into coverage. And that’s what they showed. 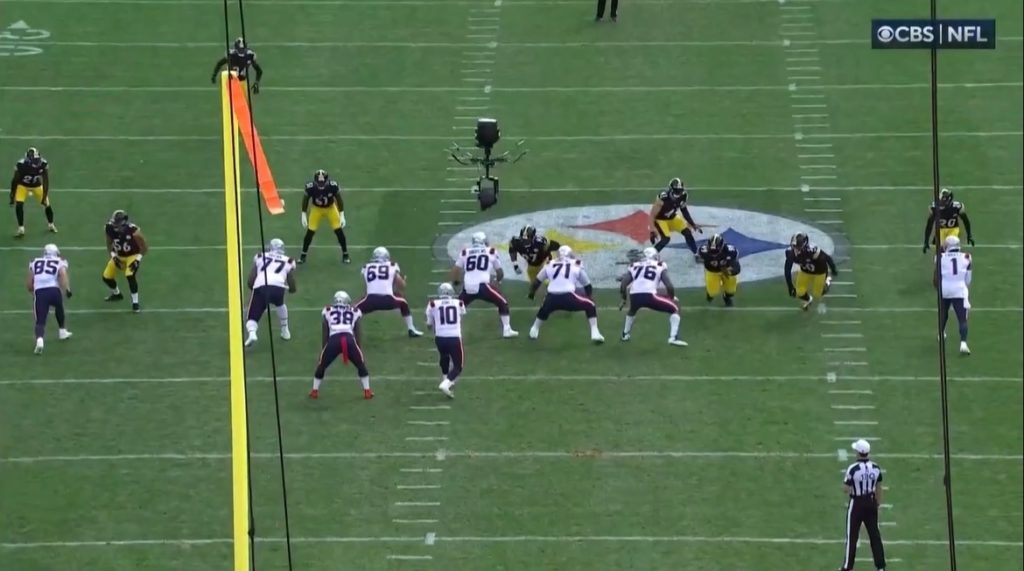 On the snap of the ball, ROLB Alex Highsmith looks and steps backwards like he’s going to drop into his hook zone. Believing he’s no longer a rush threat, the left tackle slides down to help out the guard and look for the looper coming across the formation. But the Steelers aren’t blitzing and Highsmith isn’t dropping. As Highsmith is acting like he’s going to drop, the Steelers bail out of the blitz. Instead, NCB Cam Sutton drops into coverage.

And here comes Highsmith. He executes what’s called a “coffeehouse stunt,” the idea of faking like you’re dropping into coverage, baiting the lineman to ignore you, and then rushing. You usually see it from an interior player like an ILB but not often an OLB. Left tackle Trent Brown slides away and here comes Highsmith. 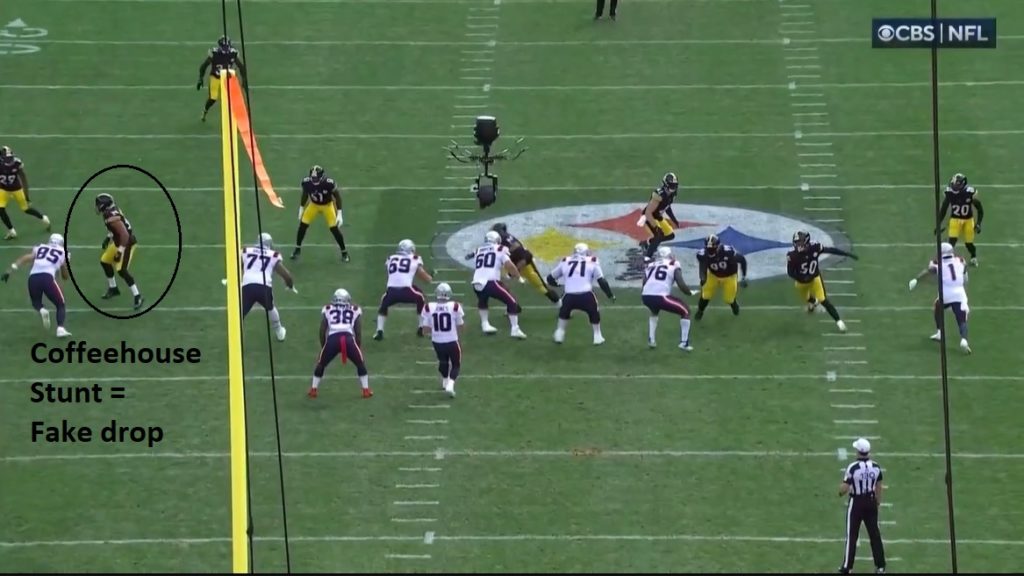 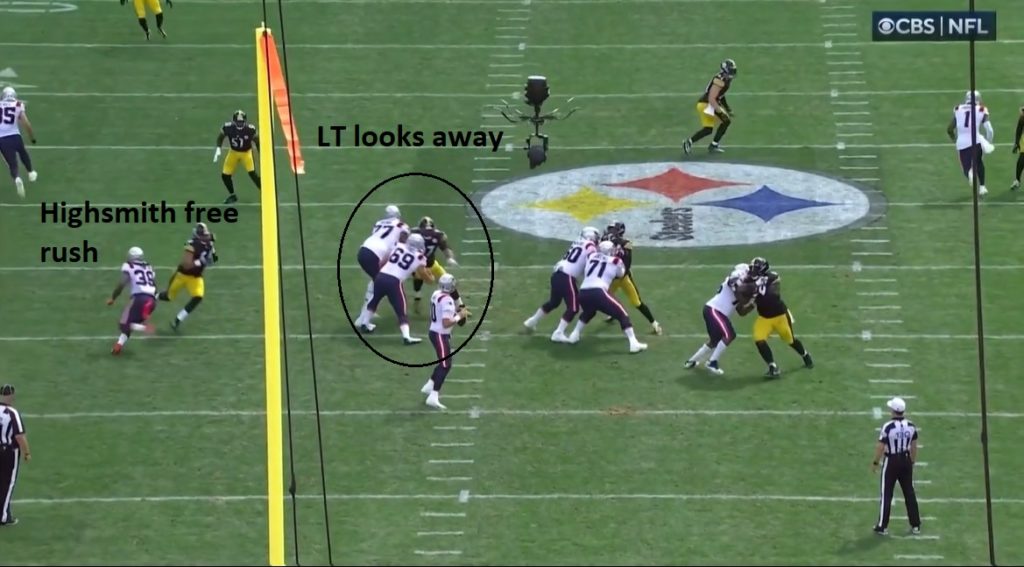 It’s a free path to the quarterback for the ones of the few pressures the Steelers’ pass rush recorded all day. Under siege, Mac Jones floats a pass down the seam. On this play, Minkah Fitzpatrick is responsible for the deep half of the field but his great range allows him to play the throw down the middle and pick it off. A nice job here by Robert Spillane to carry #3 vertical and help squeeze this throw to the outside too, decreasing the amount of ground Fitzpatrick needed to make up.

Here’s a look at the whole play. Play close attention to Highsmith from his ROLB spot execute the coffeehouse. It’s perfectly done and completely fools the Pats, who thought the same blitz as last week was coming.

It’s rush and coverage working together. And what a pretty rush it was. Pittsburgh pretended to show the same blitz as last week, fully knowing the Patriots would recognize it and protect against it, and then built a gorgeous constraint play off it, bluffing and getting creative with Highsmith’s rush to get him free off the edge. No extra blitzers needed, still rushing four and dropping seven. One last time, here’s the concepts back-to-back, Maulet’s sack last week with Fitzpatrick’s pick today.

I wish the Steelers would’ve won this game almost solely so this play would’ve grabbed more attention. It’s not as much fun talking about a great defensive play in a loss. But this was an A+ playcall, probably the best the Steelers will make all season, and Teryl Austin, Brian Flores, Grady Brown, and others have done a really nice job putting together good defensive gameplans the first two weeks. This was a sneaky diabolical call and out-schemed Bill Belichick, something every coach wants to have on their resume.

Wow. What a play.