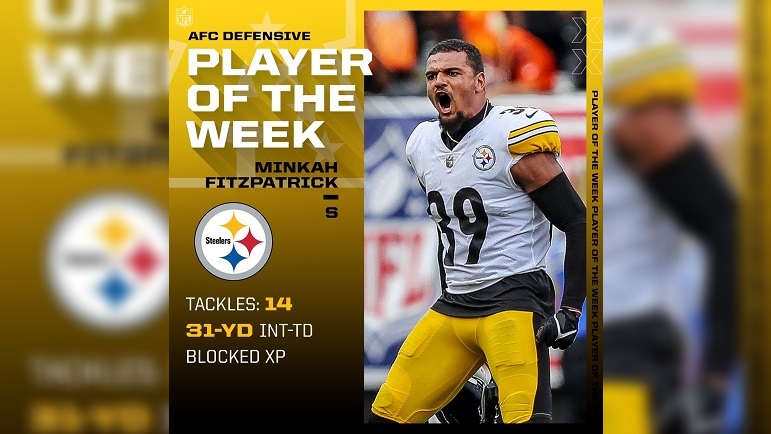 Thanks to his dominant performance in Week 1 on the road at Paycor Stadium against the Cincinnati Bengals, Pittsburgh Steelers star safety Minkah Fitzpatrick has been named the AFC’s Defensive Player of the Week for Week 1.

That is not a surprise whatsoever, considering Fitzpatrick was everywhere against the Bengals, recording 14 tackles, one interception that he returned for a touchdown, two pass breakups, and blocking the potential game-winning extra point, allowing the Steelers to get into overtime and pull out a thrilling 23-20 win.

Fitzpatrick made some headlines prior to the Week 1 matchup, stating that he didn’t like anyone on the Bengals and that he was going to remember the comments that wide receiver Tyler Boyd made last season following a win over the Steelers, in which he stated the Steelers quit.

Playing with a clear chip, Fitzpatrick was a menace from the start, returning the first pass attempt of the day from Joe Burrow to the house for the pick-six, igniting the Steelers’ sideline and quieting the crowd at Paycor Stadium in a sign of things to come from the Steelers’ defense on the day.

Aside from making plays left and right, Fitzpatrick brought a clear emotional edge to the game, which rubbed off on his teammates. He was a vocal leader, let the Bengals know about his dominance, and really wore his heart on his sleeve throughout the intense AFC North matchup.

It’s good to see Fitzpatrick get rewarded and recognized for his dominance. No other player in the league had as good of a week defensively as Fitzpatrick did, outside of maybe his teammate in outside linebacker Alex Highsmith, who had three sacks in the win. After being paid as the top safety in football (at the time), Fitzpatrick continues to show he’s worth every penny.

We’ll see what he does for an encore in Week 2 against the New England Patriots.