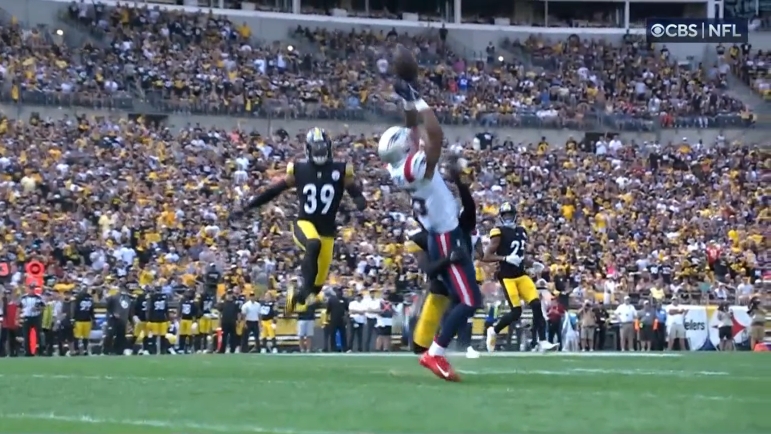 Outside of the 44-yard touchdown to Nelson Agholor—which is admittedly quite a large caveat—neither the New England Patriots nor the Pittsburgh Steelers had a great deal of success pushing the ball down the field. Patriots quarterback Mac Jones still finished the game with a respectable 252 passing yards, completing 21 of 35 pass attempts—or 60 percent on the nose—averaging 7.2 yards per attempt.

It was a rather routine day at the office for today’s quarterbacks, really. But the Steelers didn’t make enough of the plays that they needed to make in the ‘weighty’ moments, as head coach Mike Tomlin would put it.  Was that down to communication errors and not being on the same page?

“No. I think we were good, there was no miscommunication that I know of”, said veteran safety Minkah Fitzpatrick, who did intercept one of Jones’ few deep balls, via the team’s website. “They made a lot of great plays, they get paid as well. I think we were sticking in great position, for the most part. They just made plays on the ball and we didn’t”.

The Steelers’ run defense unfortunately didn’t require the passing game to be tested much late in the game, with the Patriots’ final six competitive plays from scrimmage being runs. Jones did have to complete a 3rd-and-2 pass to keep that final drive going after a holding penalty set them back, but that was about it.

There were plays made. Cameron Sutton also should have had an interception, and Terrell Edmunds had a nice pass breakup as well. Yet a 15-yard reception allowed on 3rd and 9 is not what this defense needed, as one example.

It was Ahkello Witherspoon who gave up that play, and he was also the guilty party on that long Agholor touchdown. But as Fitzpatrick said, it wasn’t a miscommunication issue. It was still a misjudgment. He didn’t anticipate the receiver elevating for the pass and played accordingly, and you saw the result.

Truth be told, I haven’t seen a lot of communication issues in the secondary, though we still need to see the all-22 footage for this last game. That’s not wholly surprising since only Levi Wallace is new to the team this year among those with regular roles, but it is a good foundation.

The question then is, of course, if they have the talent to hold up on the back end, especially when their pass rush isn’t getting it done—which often means that T.J. Watt is not available. The lack of a pass rush was certainly an issue yesterday, even if they did generate some pressure and affected some throws. But it wasn’t enough. Too many clean pockets for too long. Even Darrelle Revis will eventually allow somebody to get open.