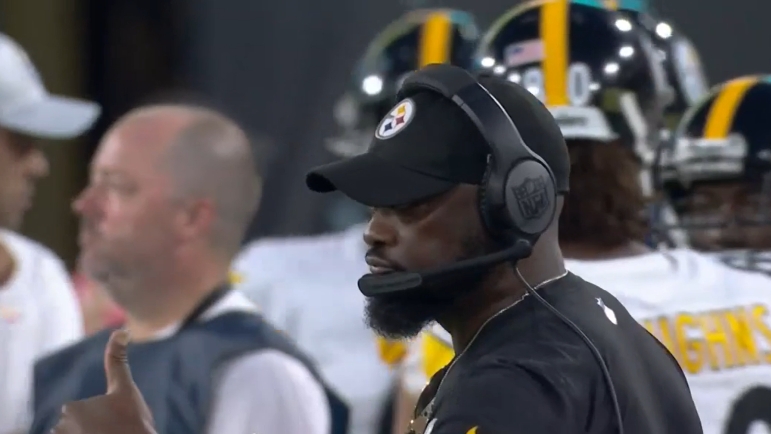 The Pittsburgh Steelers fell for the first time this season, losing at home to the New England Patriots 17-14. The defense for the most part did well throughout the game, but fell off down the stretch as the offense failed to get anything going when the team needed to attempt a comeback effort down three in the fourth quarter.

When asked if he planned to be less conservative on offense this week compared to last week when Pittsburgh held the lead for most of the game, Tomlin stated that there was a possession down component to the game facing a team like the Patriots, but that they did need to make more explosive plays this week and couldn’t get it down.

“I don’t know that we had that perspective,” Tomlin responded to the media in the postgame press conference, which aired live on the team’s YouTube channel. “We just wanted to win possession downs. And I was really upfront about that at the outset of the week. We knew it would be a possession down game and we won some of those, but not enough splash, particularly in the waiting moments.”

Last week against Cincinnati, Pittsburgh really struggled to win on third down, converting only 4-of-15 attempts. The message was made to the offense that that number had to be better this week in what profiled to be a slugfest against the Patriots, with the belief being that time of possession and ball control would be the key to victory between two teams that have both been dealing with issues on the offensive side of the football.

Pittsburgh narrowly lost the time of possession battle to New England 26:24 to 33:36 and converted 8-of-15 third down attempts compared to 9-of-17 for the Patriots. Still, it wasn’t enough as New England controlled the clock at the end of the game and moved the ball effectively on the defense while Pittsburgh’s offense could establish a drive in an attempt to either tie things up of take the lead with the score 17-14 in the fourth quarter.

Mitch Trubisky struggled in the waiting moments of the game both in the short passing game as well as connecting with receivers down the field. The run game did better this week compared to Week 1, but still wasn’t where it needed to be for Pittsburgh to move the ball in scoring position in the final minutes. The offense still has a long way to go to maintain a league and to close out games, and that will be put to the test on a short week with the Cleveland Browns up next on Thursday night.