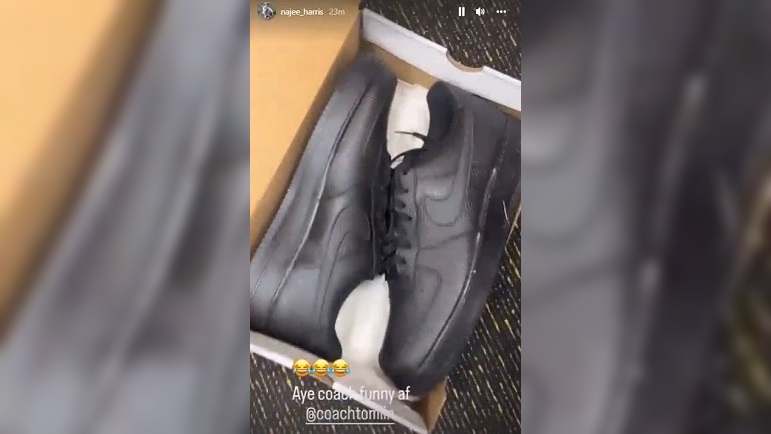 Per Najee Harris on IG, Mike Tomlin gave the whole team Black Air Force shoes and he is getting a kick out of that #Steelers #NFL pic.twitter.com/QB3EGiRDyg

Now I’m no meme expert but apparently, these shoes have special meaning in Internet culture. This 2019 article explains what the kicks signify.

“Wearers of the shoes are often considered to be shady, untrustworthy, and suspicious. While in some occupations, AF1’s are worn as work shoes, their stereotype as a shoe of a grifter or gangster usually excludes when they are part of a uniform. It’s said that the older and more worn out someone’s shoes are, the less upright they will be.”

From what I can gather as a nerd on the Internet, the idea of the joke is those who wear these shoes don’t care about anything. They don’t give a flying you-know-what. And that’s the mentality of the Steelers this year, a team that’s counted out, expected to finish with a losing season (and hey, I picked them to go 8-9 so I’m not here to throw stones), and are generally big underdogs with massive chips on their shoulders this year.

The shoes were evidently painted by local artist Cody Sabol, who has done great work for the team and community over the years, helping design team cleats during the NFL’s My Cause, My Cleats week. He shared this tweet of him going to work early this morning.

Nike was out of stock.

I painted the 146 pairs of Air Forces @CoachTomlin gave the team this morning. pic.twitter.com/OfgoT9PJsu

Here’s how WR Steven Sims reacted to the gift.

The Steelers will take that chip into Cincinnati’s stadium Sunday afternoon, opening up the year as clear underdogs to the AFC Champ Bengals. By this time tomorrow, no one will care about what shoes Tomlin gifted the team. But it’s a nod to the Steelers’ attitude and approach to the season. And a tip of the cap to Tomlin for being the coolest 50-year old coach in football.