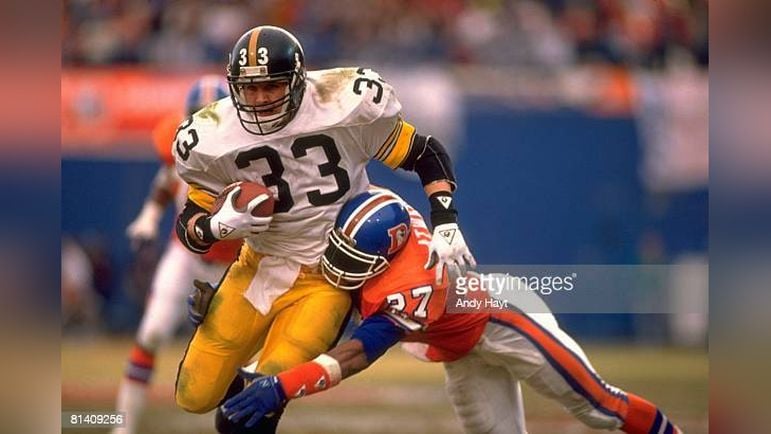 When it comes to the NFL Draft, no one truly knows where they’re going to go. Players get told a lot, by fans, by pundits, by teams themselves. But once the first team is on the clock, everything goes out the window. Merril Hoge didn’t know what team he’d be suiting up for. All he knew was the one team who wasn’t going to draft him. The Pittsburgh Steelers. Of course, the Steelers were the team who did and the rest is history.

“If they were to say who had the worst Combine in the history of the Combine, I’d be top ten,” he said. “I get the flu. I get the flu four days before I’m supposed to go. I lose 20 pounds.”

Not a fun way to kick off the biggest job interview of your career. Hoge was already a relative unknown out of Idaho State and being sick wouldn’t help quiet concerns about making the jump in competition if his testing is bad. Though potentially unreliable, NFL Combine Results lists Hoge as weighing in at 210 pounds, running a 4.89 40, with a 28.5 inch vertical, 8’3″ broad jump, and putting up 15 reps on the bench press. Even adjusted for the era, those numbers are pretty poor.

“I don’t think I caught a ball…they say turn and catch it, I turn and [the ball] hits me in the face. Now I’m blurred vision, I stumble, and it hits me again.”

But scouts saw something more in Hoge, trusting the tape over the testing. After running the 40, Hoge says he approached an Oakland Raiders’ scout to ask for his time.

“He says, ‘you don’t want to know what you’re 40 is. Here’s what’s going to happen to you. Somebody is going to draft you, you’re going to back somebody up. They’re going to get hurt, you’re gonna take their job, and they’re never going to get it back.’ Which is exactly what happened.”

After the Combine, Hoge had a host of pre-draft workouts. One of which included the Steelers. But when the Steelers arrived, the team didn’t seem interested in his football ability.

“The Steelers are coming in. I show up and said, where’s the scout…he’s watching film and goes, ‘do you play basketball?’ I thought it was a trick question.”

Hoge explains the Steelers’ scout spoke with Hoge about the basketball teams in the area, something players would do in the offseason to earn a little extra money. And that was the extent of the meeting. No football workout. Just a quick get-to-know-you-meeting.

“Of all the teams that have been here,” Hoge thought, “I know the one team ain’t drafting me. The Pittsburgh Steelers. They’re more interested in my basketball than my football…I know the Steelers won’t draft me.”

Heading into draft weekend, Hoge was expected to hear his name on Day One. No calls. The second day of the draft. No calls. By this point, Hoge was content with the idea he would go undrafted and that his football career would likely be over. Then the phone rang.

“It was the scout who asked me about basketball. He goes, ‘we’re going to pick you. You’re going to be a Pittsburgh Steeler. I want you to know something. You can make this football team. We need players like you.'”

Hoge was officially selected in the tenth round, 261st overall, in the 1987 NFL Draft. Of all the players taken in the tenth round, only two, OL John Gesek and Frank Winters, played more games than Hoge’s 114.  True to the scout’s word, Hoge made the team in 1987 and caught his first touchdown in Week 5, a win over the Colts. Here’s a look at the play, a great 3rd and 13 snag down the left seam on a pass from Steve Bono.

It was the first score of many for Hoge. By the following year, he took over as the team’s lead back, though the team drafted Tim Worley in the first round in 1989. But Hoge proved to be a versatile player and tough runner, playing for the team from 1988 to 1993. He spent a final year in Chicago before concussions ended his career.

Since, Hoge has had a successful post-football career, a longtime analyst for ESPN until 2017 and still a public figure today, doing film breakdowns for the Steelers’ team site. Not bad for a late round pick out of Idaho, who overcame a terrible Combine into a mighty fine career.

Check out Part 2 below.