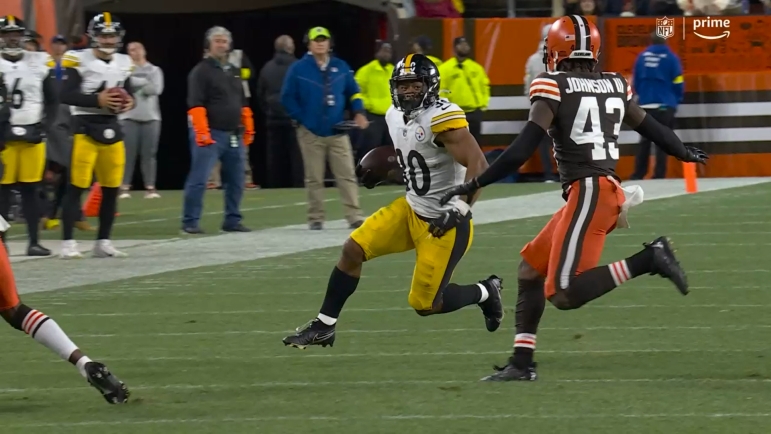 It might be a bit too early say that the Pittsburgh Steelers have themselves a real find in rookie running back Jaylen Warren just three games into the 2022 regular season, but with that said, the undrafted free agent out of Oklahoma State sure has looked impressive at times in the 52 total offensive snaps he’s played.

On Thursday, Steelers’ offensive coordinator Matt Canada was asked to give his thoughts on Warren ahead of the team’s Week 4 Sunday home game against the New York Jets and he spoke glowingly about the rookie running back.

“You look at what he’s done, how he’s come in, his unbelievably great job in protection,” Canada said of Warren on Thursday, according to a transcript provided by the team. “That play you referenced [third quarter shovel pass to Warren wiped out by penalty], that was a well-blocked play, it was a timing play, everything was really good about it. But then about 20 yards downfield he made it about 15 more yards doing some special things. He can run it, he can catch it, and his protection’s been really, really good.”

That shovel pass play to Warren On Thursday night against the Cleveland Browns that was referenced during Canada’s media session came on a second-and-14 from midfield in the third quarter and went for 35 yards. Unfortunately, it was wiped out by a penalty on tackle Chukwuma Okorafor for allegedly being an illegible player down the field. That play could have wound up being a huge turning point in the game had it stood. You can see it below and see how Warren did his part to make the most of it. It’s spilled milk now at this point, however.

The fact that the Steelers now have a running back such as Warren should allow the team to continue to not overwork starting running back Najee Harris moving forward into the season. Speaking of Harris, Canada was asked on Thursday what the rapport and relationship is like between the team’s top two running backs and how much the starter has helped the rookie backup so far.

“He’s produced when we put him in there,” Canada said of Warren. “Obviously, Najee is Najee and I think we sat out here and talked about overuse of Najee and too many plays and all those things. That’s not why we’re doing it, but we are understanding the wear and tear of Najee over X amount of games in a season and X amount of games in a career. So, to have somebody go in there who can basically do it all, which is what he’s done, he’s not just a short yardage runner. He’s not just a pass protector. He’s not just a scat [back]. Jaylen’s come in and really fit that role very well to be a guy as new to the program as he is.”

To date, Warren has registered 55 yards from scrimmage on 13 total touches. As Canada made sure to reference, Warren’s pass protection so far has met the standard as well and that aspect of his game should allow for him to continue to spell Harris moving forward unto the season. Warren is also a bit more explosive that Harris is as well and hopefully that will translate into an explosive running play or two in the next few games. The Steelers’ offense has yet to register such an explosive play on the ground entering Week 4 so that would be a huge development should Warren be able to deliver a few soon.

About the only negative related to Warren just three games into his rookie season is the fact that he has shown fumbling tendencies. He fumbled against the Browns on Thursday night in the second quarter, but fortunately wide receiver Diontae Johnson was able to pounce on the loose football. If he can move forward without ball security issues, he should be able to continue to see 10 to 15 snaps a game on offense.

“So, really happy with him, excited for his growth and continued growth and [Eddie] Faulk[ner] has done a great job with him,” Canada said of Warren on Thursday.