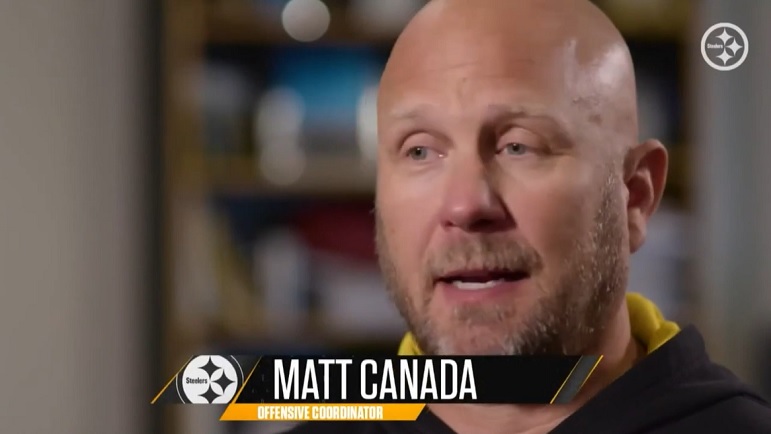 Hope you were sitting down before you read that title. Big news coming your way. The Pittsburgh Steelers’ offense isn’t putting enough points on the board. Ok, good night folks.

Speaking to reporters Thursday afternoon, OC Matt Canada was confronted with the obvious. While Mike Tomlin is publicly encouraged by the Steelers’ offense, this unit has a long ways to go.

“Until we start scoring enough points to do what we want to do, it’s not enough,” Canada said via a team transcript. “I think [Coach Tomlin] does a great job saying that everything’s not good enough until it is good enough, and I think we all understand that.”

Through three games, the Steelers’ offense has scored just 16, 14, and 17 points, excluding Minkah Fitzpatrick’s pick-six in the opener. The offense has just four touchdowns in three games, carries an abysmal 33.3% third down conversion rate, and is among the worst in the league when it comes to explosive plays. The only thing “saving” this offense is that scoring is down across the league making Pittsburgh slightly below average on a points-per-game basis, 19th overall.

Expectations were low for this offense coming into the year but the pace Pittsburgh is on simply isn’t good enough to win many games. Things only get harder after this weekend. Following the Jets game, three of the Steelers next four games come against the Buffalo Bills (third in PPG), Miami Dolphins (eighth), and Philadelphia Eagles (fifth). Scoring 20 points a game isn’t going to cut it.

“We’ve got to score more points. That’s certainly my focus.”

At this point, there isn’t a lot else to say other than that. It’s true this offense was going to deal with growing pains of a new quarterback and more turnover, but the NFL isn’t like other major sports leagues. Baseball plays 162 games, basketball and hockey each 82 game seasons. A slow start isn’t a death sentence. A quiet first month can be recovered from. In a 17-game NFL season, a slow first four games makes up 23.5% of the year, equivalent to nearly 40 games in baseball.

That makes this Sunday’s game against the New York Jets all the more critical. Pittsburgh climbed out of a 1-3 hole last year, but that’d be tougher this season with a brutal-looking schedule on the horizon and no Ben Roethlisberger to lead a half-dozen fourth quarter comebacks. But the Steelers are taking it one week at a time, and for the moment, all that matters is scoring one more point than the Jets by the time the clocks hit zero.