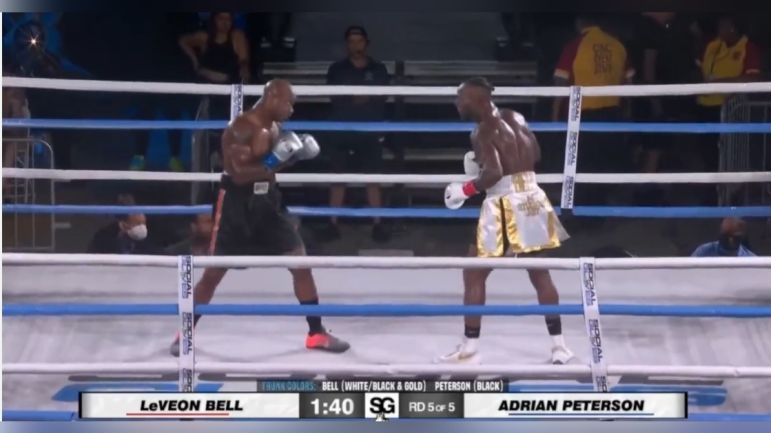 Before the Pittsburgh Steelers duke it out with the Cincinnati Bengals today at 1 PM/EST, Le’Veon Bell and Adrian Peterson took to the ring for a boxing match at Banc of California Stadium in Los Angeles, California Saturday night. Bell came out on top, KO’ing Peterson in the fifth round.

Bell and Peterson agreed to spar each other months ago but had their initial date of July 30th delayed after the headliner match fell through. It was rescheduled for September 10th, with Bell/Peterson being the co-main event fight.

Peterson came in heavier at 218 pounds compared to Bell weighing in at 204, though Bell had youth on his side, 30 years old compared to Peterson’s 37 (though he certainly doesn’t look it).

Initially, the fight was uninspiring with neither able to land many blows in the early rounds. It looked like two…running backs trying to box. Adrian Peterson recorded the first “knockdown,” a solid left job to Bell’s chest that briefly put sat him on the mat.

But all that matters in a fight is whoever throws the last punch. That went to Bell, who KO’d Peterson in the fifth round to win the match. Take a look at the sick right hook right into Peterson’s chin. In the football world, we call that a game-winner.

Here’s a ringside look at the finishing blow.

Though it was a big win for Bell, not many paid good money to see it. Reportedly, only 200 tickets were sold to the fight for a stadium that held over 20,000. This wasn’t exactly Ali vs. Frazier.

For the non-boxing fan I am, my only meaningful takeaway is that Peterson is the most in-shape 37-year old I’ve ever seen.

It’s unclear if either will return to the NFL. Peterson has expressed a desire to play for a contender, recently mentioning the San Francisco 49ers, Los Angeles Rams, and Buffalo Bills as three teams he’d be interested in suiting up for. He appeared in four games last year, spending time with the Tennessee Titans and Seattle Seahawks. Bell split time between the Tampa Bay Buccaneers and Baltimore Ravens last season but was ineffective for each squad, averaging well under three yards per carry, though his sample size was small.

If neither pursue their NFL dreams, perhaps a rematch will be in order. For tonight at least, Bell is the champ.